The leadership of the NBA has asked Effiong to “purge himself” by apologising so he can be released on the same day.

The Nigerian Bar Association has asked Inibehe Effiong, human rights lawyer, to apologise to the Chief Judge of Akwa Ibom State, Ekaette Obo before he could be released from prison, SaharaReporters has gathered.

Last Wednesday, Obot sent Effiong to one month is prison after the lawyer reportedly said he did not feel safe in court. 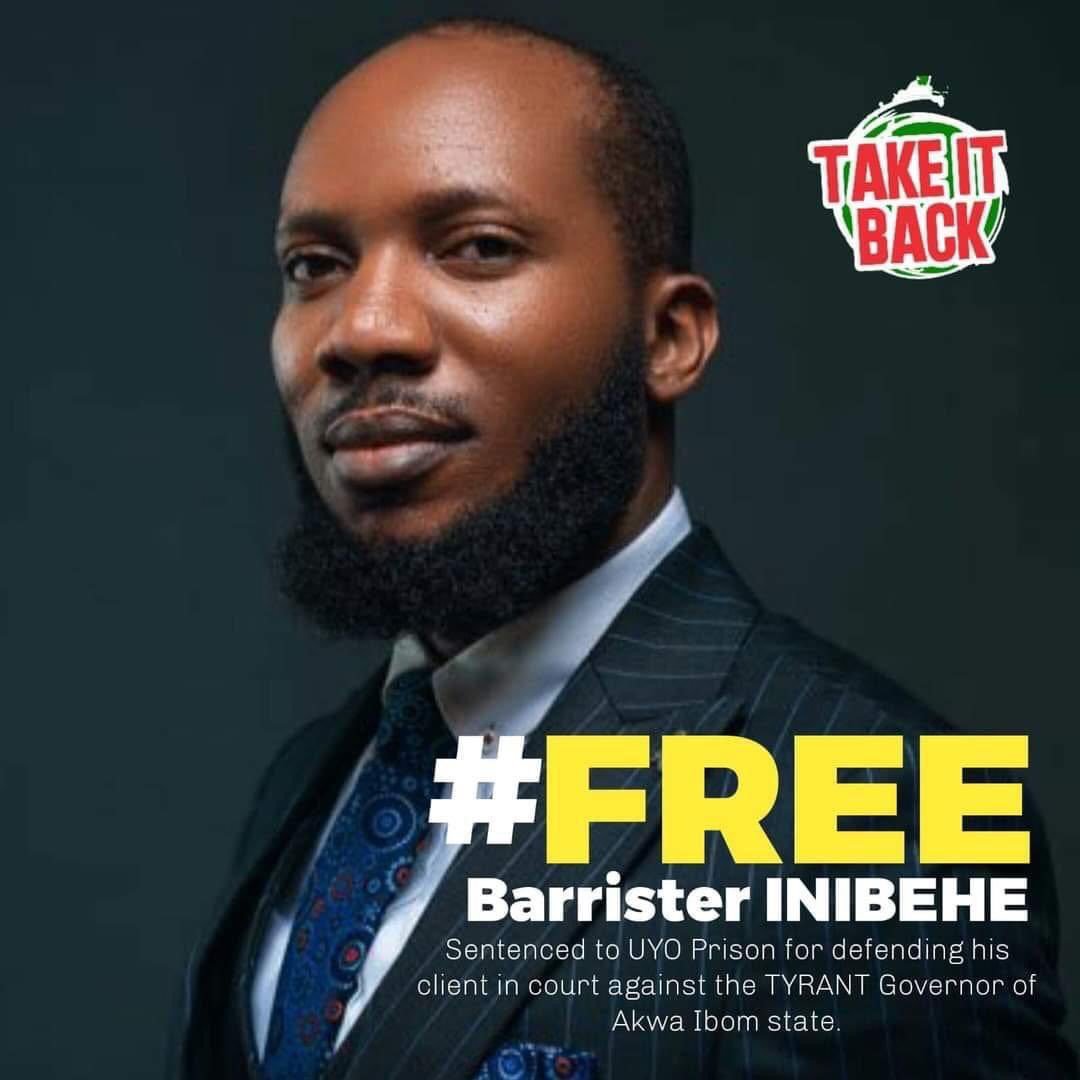 The human rights lawyer, who is also the National Legal Adviser of the African Action Congress (AAC), was in court to defend Leo Ekpenyong, a lawyer, in a libel suit filed by Udom Emmanuel, governor of Akwa Ibom.

According to the African Action Congress Governorship Candidate in the state, Iboro Otu, the leadership of the NBA has asked Effiong to “purge himself” by apologising so he can be released on the same day.

“The state chairman of NBA just called me a moment ago. He’s talking about an arrangement where Inibehe has to purge himself by apologizing and he can be released same day. I told him that wasn’t possible and we can’t be part of that arrangement in any form or manner. And that Inibehe has already anticipated this move and expressed himself to me about that yesterday in very clear words. NO. NEVER!

“It seems the bar bench are looking to go see him tomorrow and discuss same with him, I told them it’s a waste of everyone’s time.

“He advised me to go see the bar bench members tomorrow 12pm before they leave for the prisons at the NBA office, I told them I could do that as a sign that we have exhausted all diplomacy and they can’t do anything else from their ends cuz Inibehe cannot apologize for what he didn’t do plus someone has to be held accountable for the illegal way he was rounded up and committed to prison.”

“#FreeInibeheEffiongNow @OlumideAkpata & the men in charge of @NigBarAssoc are trying to throw rights lawyer @InibeheEffiong under the bus by asking him to accept his unjust sentence, “purge” himself of contempt & apologise to his traducers in exchange for freedom. He rejects it!” he posted on Twitter.

Inibehe Effiong on Sunday said he had been having a good night’s rest in prison.

Effiong said this on Sunday when Otu and other stakeholders of the party visited him.

"Myself and the exco just returned from our trip to the Prisons. Unfortunately, we’re not allowed to take pictures but we had a great time with Inibehe.

"I passed to him your very brotherly concerns and sympathy alongside your consistent effort and work done to get him out by tomorrow by God's grace.

"He is indeed very happy about your effort and even said, albeit in jest, he has been having a serious good night rest ever since he’s been there, something he hasn’t had in a while. He’s very well actually and promises to keep up with the fight even harder than now," the AAC governorship candidate told SaharaReporters on Sunday.

SaharaReporters earlier reported that Justice Obot allowed armed policemen wielding AK-47 rifles into the courtroom on Wednesday, June 27, after threatening to jail Effiong for accusing her of being biased and asking her to recuse herself from the case.

It reported that following her threat, the judge jailed the lawyer for one month for asking her to recuse herself from a libel suit filed against a fellow lawyer, Leo Ekpenyong by the state governor, Udom Emmanuel in Suit No. HU/279/2019.

Udom Emmanuel had sued Ekpenyong for defamation of character over a publication in which he accused the governor of “buying judgment” from the 2019 National Assembly Election Tribunal.

Similarly, a House of Representatives candidate in Akwa Ibom State, Clement Jimbo, last Thursday, went on a solo protest walk in Uyo over the unlawful incarceration of Effiong.

Mr Jimbo is the All Progressives Congress (APC) candidate for Abak/Etim Ekpo/Ika Federal Constituency for the 2023 general elections.

The candidate, holding about four placards, walked from a popular roundabout in Uyo to the judiciary headquarters, along Wellington Bassey, which is a few metres away from the Government House.

BREAKING: Foster Mother Of Lagos Tricycle Rider Killed By Policemen For Refusing To Give Bribe Dies Of Shock

Red Cross To Develop Finance Mechanism Schemes For North-East, Others

Letter To Obasanjo: Iyabo and I Met In Cambridge And She Expressed The Same Sentiments, Chief Segun Osoba Confirms