The Independent National Electoral Commission has backdated Certified True Copies of reports of the All Progressives Congress (APC) primaries to accommodate Senate President, Ahmad Lawan, Godswill Akpabio and others as candidates in the 2023 general elections, SaharaReporters has gathered. 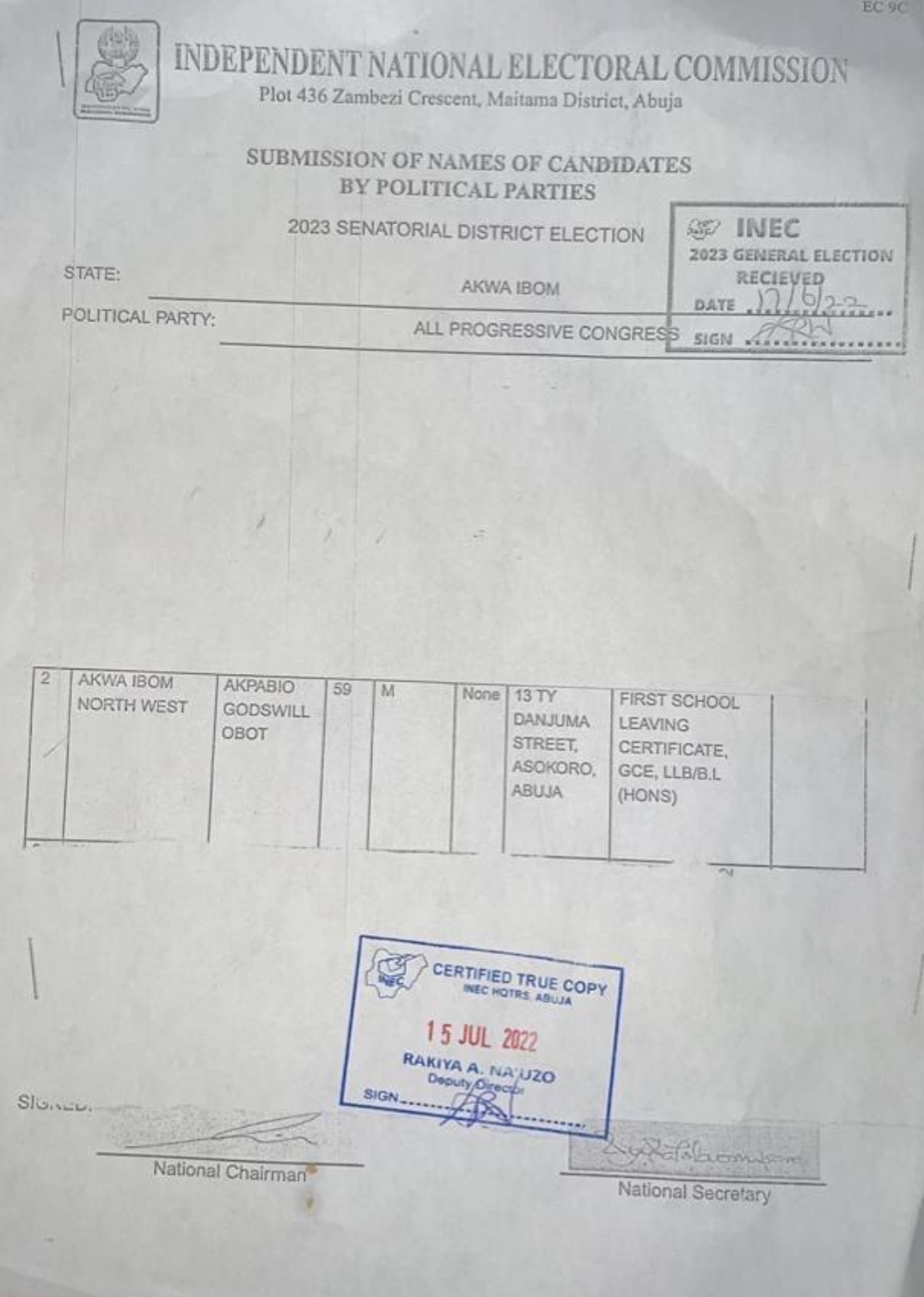 In Yobe, a certified true copy of the commission’s report from the election of May 28, 2022, revealed Machina polled 289 votes out of 300 delegates. The document was certified by the electoral office on June 23, 2022.

The National Chairman of the APC, Abdullahi Adamu had warned of severe sanctions if Machina refused to relinquish his ticket to Lawan.

Adamu claimed that the party is supreme and that it reserves the right to decide who gets its ticket in any election.

In Akwa Ibom, Akpabio was declared the winner of another primary, but Mike Igini, INEC resident electoral commissioner (REC) for the state, had said the exercise which produced the former minister as a candidate was not monitored by the commission.

SaharaReporters reports that Section 31 of the Electoral Act only allows for substitution when a candidate dies or when he or she withdraws from the race and informs INEC in writing.

SaharaReporters had earlier reported moves by the INEC leadership to shred the reports of the Resident Electoral Commissioners in the affected states by backdating them to favour Lawan, Akpabio and others.

“INEC has caved in to political pressures and other forces deployed by the outgoing Senate President, Mr Ahmad Lawan and his backers to shred the report of the INEC Resident Electoral Commissioner that supervised the APC primary Elections in Yobe state by doctoring and backdating it to accommodate the Senate president and others in states where they have an interest,” a source had said.

“Despite the glaring fact that Ahmad Lawan was a principal actor in the APC presidential primary, which saw him lose to Asiwaju Bola Ahmed Tinubu, he has since mounted relentless pressures on INEC leadership to obtain a senatorial ticket in Yobe state by all means possible.”

Speaking to SaharaReporters on Tuesday, a source confirmed that the certified true copy of reports had been doctored and backdated to accommodate the Senate President and former Akwa Ibom Governor.

“Nigerians will be shocked that despite serial denials by Professor Yakubu-led commission that Lawan and Akpabio names would not be on the ballot as senatorial candidates respectively, INEC is merely deceiving them, signifying a roll back to Professor Maurice lwu-led commission that gave so much hope for the 2007 election which later became the worst election in Nigeria’s electoral history.

“The EPM (Election Monitoring Department) under a very compromised Director, Musa who is about to retire from service and one Barr. Tanimu of the legal department have back-dated documents to include Lawan and Akpabio on the ballot. INEC is now returning gradually to Prof Maurice lwu’s era.

“Just as it was then that there was a notorious National Commissioner named Chukwuani who was the politicians’ hatchet man of that inglorious period, so is Festus Okoye now who is the hand-gun of politicians being used in the emerging efforts to mess up the outcome of party primaries by accepting from political parties names of individuals who didn't participate in primaries monitored by its states’ offices.

“Nigerians will recall that Festus Okoye had been in virtually all television stations granting interviews on Channels TV to prepare the minds of Nigerians to what they are about to make public on the final list when he said ‘RECs are not recognised members of INEC and the commission is not bound by the reports of party primaries monitored by state offices because they also send monitors from Abuja that write reports to INEC Headquarters'.

“Both the EPM and legal department have advised lawyers of Akpabio to file a writ of summons so that witnesses could be called and Abuja INEC Headquarters will prepare and bring forward a staff member that will testify that he or she monitored the re-run primary in line with what Okoye had told Nigerians. This is how they planned to do away with state offices' reports of the party primaries submitted to the headquarters.

“APC has taken control of INEC headquarters, that is why there’s an outcry over the outcome of the primaries in virtually all the states across the country, from Oyo, Ogun, Abia, Akwa Ibom, Kano, Sokoto, it’s the same story. Festus Okoye’s interview has done so much damage to the confidence Nigerians were beginning to have over the outcome of recent elections.

“Commissioner Okoye is now the spokesperson for both INEC and corrupt politicians, as he has been assuring them of having not committed any offence under section 115 of the 2020 Electoral Act despite a Federal High Court judgment in Ebonyi State. Politicians have infiltrated and are in control of INEC. The chairman of INEC at a recent event deceptively told his listeners that they will implement the provision of the 2022 Act and that politicians should study it yet he accepted from political parties names of persons who didn't go through primaries and refused to apply the provisions of section 84 of the same Act and section 285 of the Constitution to reject those names that his commission published as candidates.

“The discordant tunes from headquarters and states where party primaries were conducted have created serious doubts about the trustworthiness of Prof Mahmood Yakubu’s headship of INEC to conduct a free fair and credible election in 2023. The brazenness of INEC in forging a document showing that the name of Akpabio was submitted to it is a further confirmation of compromise at the highest level.”

Crisis Brews In Delta Over Padding Of 2016 DESOPADEC Budget, Okowa, Igbuya, Others Fingered

Five Months After, Disability Act Yet To Be Implemented

Tinubu Should Contest To Be Grand Comedian Of Nigeria, Not Nigerian President Considering His Public Gaffes –Atiku’s Aide

Impact Of Japa On The Lower Classes By Cheta Nwanze