Pastor Oyakhilome’s Suspension Of Nephew Who Appeared On Tinubu's Campaign Flier Was Over Gross Misconduct, Not Political Partisanship – Church Sources

The founder of the church, Pastor Chris Oyakhilome on Sunday, August 7 announced the suspension of his nephew, Woghiren, from his position as the President of LoveWorld Next and LoveWorld Innovation, branches of Christ Embassy.

Sources in Christ Embassy Ministry, also known as LoveWorld Incorporated have denied that the recent suspension of Daysman Oyakhilome Woghiren was connected to his association with the presidential candidate of the All Progressives Congress (APC) in the 2023 election, Bola Tinubu.

The founder of the church, Pastor Chris Oyakhilome on Sunday, August 7 announced the suspension of his nephew, Woghiren, from his position as the President of LoveWorld Next and LoveWorld Innovation, branches of Christ Embassy. 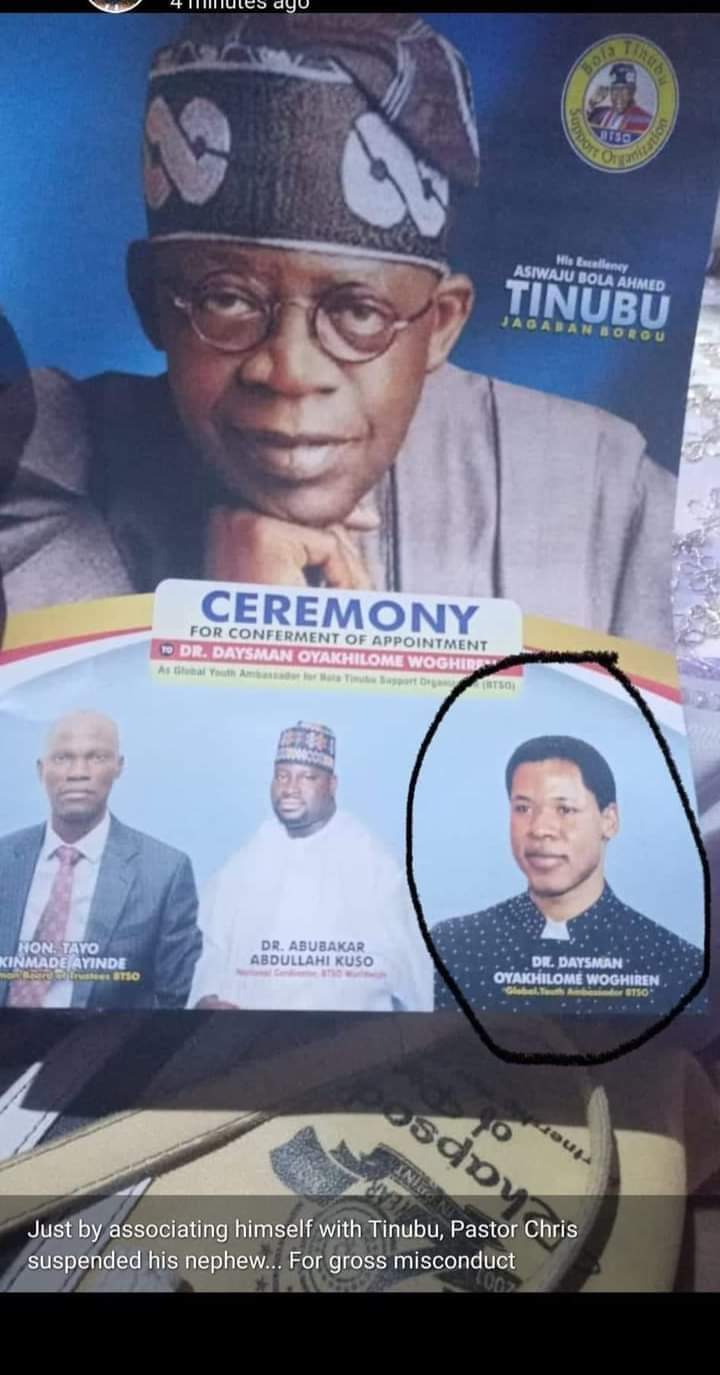 Some media reports had linked Woghiren’s suspension with his alleged relationship with the former Lagos governor. Also, an APC campaign flier with the picture of Woghiren that surfaced online seemed to confirm the report as it suggests his appointment as the Global Youth Ambassador for the Bola Tinubu Support Organization (BTSO), a support group for Tinubu's presidential ambition.

Oyakhilome during a global and praise night of the church, monitored live by Superscreen TV on Sunday, announced the suspension of his nephew, saying he would undergo spiritual rehabilitation.

The preacher first quoted Proverbs 19: 18, saying, “Chasten thy son while there is hope and let not thy soul spare for his crying.”

“So, if he’s crying, it says don’t change your mind. Take actions so you don’t destroy him,” Oyakhilome said.

“Don’t say that because some people are doing it, then you start doing it too and misbehaving,” he added.

Sources within the church hierarchy insisted that Woghiren’s suspension had nothing to do with the campaign flier with his picture along with pictures of some APC chieftains, suggesting he is part of Tinubu’s clique.

“No, the removal of his (Oyakhilome) nephew was not related to Tinubu as being suggested,” one of the church sources said.

“It had to do with an accumulation of misconduct on the part of his nephew (Woghiren),” another source noted.

Turkey’s Earthquake: Death Toll Rises To Over 4000 As Rescue Workers Battle On