Meanwhile, they have continued to detail their expenses to NIMASA without getting appropriate responses.

The Batch 2 cadets of the Nigerian Maritime Administration and Safety Agency (NIMASA) on the Nigerian Seafarers Development Programme (NSDP) in the Philippines for their Certificate of Competency (CoC) have lamented that they are currently homeless and starving.

Some of the cadets who interacted with SaharaReporters lamented that their ordeal is due to neglect and nonpayment of their allowances by the NIMASA authority, making it impossible for them to renew their house rents, procure their visas and other expenses.

The cadets said they are about 117 in number.

According to them, they are supposed to complete the course within four years but it is now running to 10 years as there have been several delays and arbitrary extension of some of their examination. 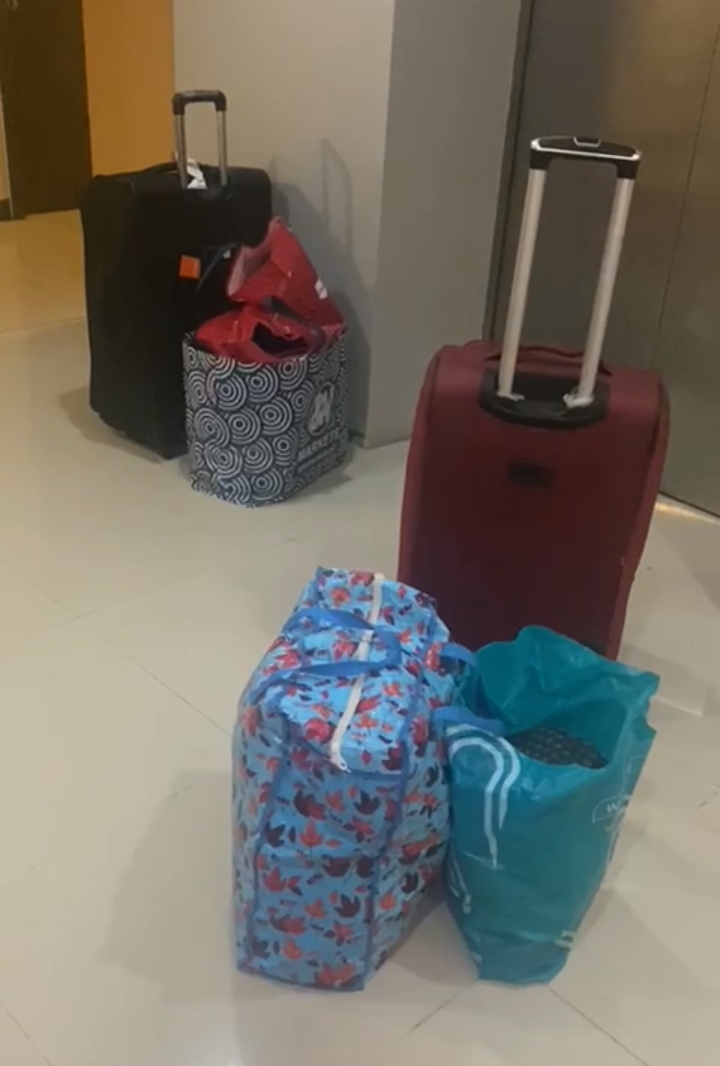 The cadets noted that the Nigerian government has provided enough budget for the project but “NIMASA decided to embezzle the money and render us useless in the Philippines,” adding that they had not received their allowances for the last three months.

With video evidence, the cadets showed how they were ejected from their apartment on Friday, August 5 as they were unable to renew their rents and pay their utility bills. They lamented that they were staying in the rain in an uncompleted building.

They explained that “On May 7, 2021, it was clearly stated by Mr. Aliyu (NSDP Department Head) encouraging any cadet to proceed to the Philippines and assured us that the embassy will give us our money, that the money is already in the embassy.”

Unfortunately, the cadets said that to date, the money has not been released to them. Meanwhile, they have continued to detail their expenses to NIMASA without getting appropriate responses. 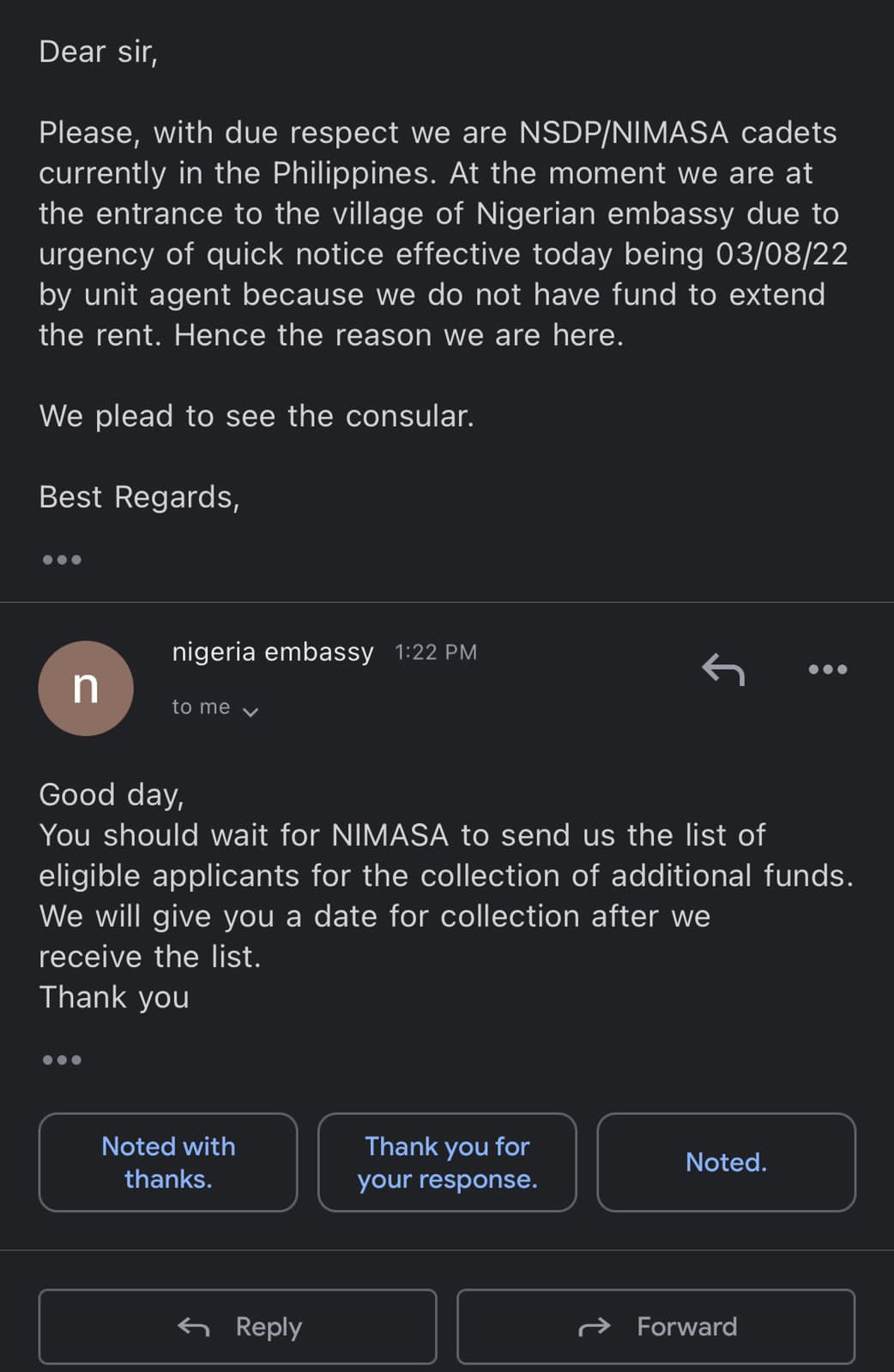 Other expenses on them include “a quarantine spending for two weeks after we arrived in Manila, each day 62 dollars multiplied by 14 days (840 dollars) coupled with feeding, visa extension for two months is $200 and a total of $1200 for six months.”

They need to pay for the “Certificate of competency (CoC) in IMO (International Maritime Organization) Regulation that takes a minimum of six months with STCW training (13 courses). Transcript of records (TOR) that takes six months.

“For three (3) months we have not collected allowances, meanwhile we were promised by NSDP Department Head, Mr. Aliyu on May 7, 2021, that all our money for the training and allowances are already in the Philippines Nigeria Embassy.”

They lamented that “We are all starving here,” adding that “This is a course we were supposed to study for four years but it is now turning to 10 years and still counting.

“Without mincing words, FG (federal government of Nigeria) has provided enough budget for this project but NIMASA decided to embezzle and render us useless in the Philippines. The majority of us, NIMASA, have not provided Sea Time experience. A lot of us are still at home in Nigeria without Sea Time experience; without this experience, you cannot qualify to write a Certificate of Competency (CoC).

“This is a program the Federal Government of Nigeria initiated to train world-class Seafarers but NIMASA is deviating from the initial purpose of the program. Some of us approached NIMASA Management to refund our sea time fund but they refused to give us.”

According to them, the International Maritime Organization (IMO) Regulations provided that the CoC be reviewed every six months intervals before examination “But NIMASA is compelling us to use two months to write and come so that they will siphon the fund, which we will not agree to. We are ready to take them to court if they fail to do the necessary.

“We are all frustrated in a foreign land without help. The Nigeran government, Senate, House of Representatives and all meaningful parastatals should stand up for us,” one of them said.

The cadets further alleged that NIMASA is compelling them to do only four special courses which according to them, no company can accept and employ them with.

“The question now boils down to, are they expecting us after spending 10 years to return to Nigeria without having the necessary certifications required to work with shipping companies? They questioned, adding that “This is really too much for us to bear as Nigerians.”

They lamented that as it is, they neither have food to eat nor water to drink; and the situation is made worse as things are way too expensive in the Philippines “But NIMASA decided to remain quiet,” meanwhile, “Visa extension fund, NIMASA didn’t give us. We are so frustrated at the moment.”

When contacted, Osagie Edward, Assistant Director, Public Relations, NIMASA told SaharaReporters that the agency is currently reviewing the cost of direct sponsorship of the cadets as it is aware that the cost of living has increased particularly in the Philippines due to global inflation.

NIMASA also said that it is working closely with the Nigerian Embassy in the Philippines to address the challenges associated with the unexpected price increases, but maintained that it paid the tuition fee, examination fee and the original cost of feeding and accommodation in full, with allowance for extra funds as pocket money for the cadets.

“The Director General of NIMASA Dr. Bashir Jamoh noted that the review of ongoing sponsorship cost has become necessary due to the global inflationary trends which are very pronounced in the Philippines, India and some other countries where Nigerian cadets are undergoing Certificate of Competency (CoC) Examination training under the NSDP programme. The sponsorship covers training leading to obtaining a Certificate of Competency, CoC.

“We are not unmindful of the unforeseen global inflationary trend which has affected the cost of sustaining our cadets who are on sponsorship in some schools under the NSDP programme.

“Though NIMASA paid the tuition fee, examination fee and the original cost of feeding and accommodation in full, with allowance for extra funds as pocket money. However, it is obvious that the cost of living has increased particularly in the Philippines due to global inflation.

“The Agency is working closely with the Nigerian Embassy in the Philippines to address the challenges associated with the unexpected price increases.

“We have put in place immediate and long-term arrangements to minimize the effect of inflation on their living standard during the programme. The Management of the Agency has approved an additional $2,000 dollars for each cadet, as extra funds due to inflation.

“This is a short-term measure to cushion the effect. I am sure the Nigerian Embassy will get in touch with the students immediately and the funds are ready to be disbursed. It is a well-coordinated arrangement through the embassy,” the agency said.

However, the cadets told SaharaReporters that NIMASA only wants to outsmart them as they have been making the same promises without fulfilling them.

“When we are ready to go on live protest, they will realize that what they started is not good to embark on,” one of them said.

They said that some of them had gone to the Nigerian Embassy in the Philippines to let them understand their plight.

They challenged NIMASA to publish the exact amount of money they (NIMASA) have collected from the government for each cadet.

How Emir Of Ilorin, Kwara Governor And Saraki Have Oppressed Oba Of Jebba Since 2003