SaharaReporters earlier reported that Justice Obot sentenced Effiong to one month in prison over alleged contempt during proceedings on a libel case between Akwa Ibom State Governor, Udom Emmanuel and Barr. Leo Ekpenyong.

SaharaReporters earlier reported that Justice Obot sentenced Effiong to one month in prison over alleged contempt during proceedings on a libel case between Akwa Ibom State Governor, Udom Emmanuel and Barr. Leo Ekpenyong.

The newspaper also reported that Obot had allowed armed policemen wielding AK-47 rifles into the courtroom on Wednesday, June 27, after threatening to jail Effiong for accusing her of being biased and asking her to recuse herself from the case.

It reported that on Wednesday, July 27 in fulfilment of her threat, the judge jailed the lawyer for one month for asking her to recuse herself from a libel suit filed against a fellow lawyer, Leo Ekpenyong by the state governor, Deacon Udom Gabriel Emmanuel in Suit No. HU/279/2019.

Udom Emmanuel had sued Ekpenyong for defamation of character over a publication in which he accused the governor of “buying judgment” from the 2019 National Assembly Election Tribunal.

However, Justice Obot on December 15, 2020, gave judgment in favour of the governor, the Claimant/Applicant. The court found the Defendant liable for defamation and subsequently awarded N1.5 billion against him.

Effiong however challenged the judgement and one other involving a former senator, Effiong Bob and successfully persuaded the court to set them aside.

“You don’t stand before me and talk nonsense,” Justice Obot in December 2021 told the human rights lawyer.

“I’ve been on this side of the law for over 30 years and you don’t come and teach me the law from there.”

Refusing Effiong’s application, the judge had said, “Preliminary objections are taken first in every proceeding, especially when it touches on jurisdiction. If you have replied to that objection, why are you afraid?

“Is anything the matter with you? This is the court of law and things are done according to rules here. Sentiments do not overrule that.

“You are not on Channels Television, neither are you on Akwa Ibom Broadcasting Television.”

Following the manifest bias, the Defendant (Ekpenyong) through his Counsel, Inibehe Effiong, filed a Motion on Notice asking Justice Obot to reassign the case to a neutral judge, having shown bias.

Inibehe had argued that since the Chief Judge had already entered a default judgment in the suit against his client in the manner and circumstance, her mind was prejudiced or likely to be prejudiced against the Defendant/Applicant.

But she had cautioned and pointedly said to Effiong to "stop fighting my governor."

Justice Obot in the “course of the proceedings in that case, just like in the instant case, derided the Applicant's counsel."

The lawyer had also cited that Justice Obot attended on June 11, 2022, the wedding ceremony of one Ms. Eyakena Abast Effiong Bob; the daughter of Senator Effiong Dickson Bab, a notable political figure in Akwa Ibom State.

The insistence of Inibehe Effiong to ask the Chief Judge to recuse herself was also based on the alleged hatred Justice Obot had exhibited against him several times in open court for defending his client.

The Chief Judge was alleged to have openly asked a lawyer, Mr Augustine Asuquo why he was practising in the same law firm with his colleague, Inibehe Effiong, and openly derided him in the most uncomplimentary terms and gone further to impress on Asuquo to leave the law firm (Inibehe Effiong Chambers) and look for "a senior lawyer" to work with so that he can learn.

She was also said to have accused Inibehe of evading service and "running away from the bailiff on the streets of Uyo". She also accused him of bringing an "herbalist" to the court during a court sitting in the case.

It was gathered that Justice Obot saw the application to reassign the case as a threat to her career in the judiciary.

But in the proceedings doctored by the judge and released barely 48 hours after being sued by Inibehe Effiong and 21 days after she sentenced Effiong, there was no mention that the lawyer had asked her to recuse herself from the case.

She also failed to add that the lawyer had applied that she should order the armed security officers to leave the courtroom as their presence was "creating hostility".

“The proceedings failed to capture the application Inibehe made reminding her of our pending motion for recusal including an application to order the officers with AK-47 to leave the courtroom as their presence was creating hostility in the court thus making it inconvenient for him to continue with his cross-examination of Governor Udom's witness,” a source told SaharaReporters on Sunday.

Meanwhile, Obot had violated Section 36 (7) of the 1999 Constitution of the Federal Republic of Nigeria.

According to the Section of the Constitution, “When any person is tried for any criminal offence, the court or tribunal shall keep a record of the proceedings and the accused person or any persons authorised by him in that behalf shall be entitled to obtain copies of the judgement in the case within seven days of the conclusion of the case.”

SaharaReporters had reported that the judge rushed back from vacation to release a copy of the proceedings, which had been doctored.

A source had said the judge “hurriedly returned from vacation to release the doctored copy of the proceedings”.

SaharaReporters earlier reported that Obot was making moves to forge the court proceedings she used to sentence Effiong to one month’s imprisonment for alleged contempt.

“The Chief Judge is currently working round the clock to doctor the proceedings in which she used to sentence Inibehe after condemnation from right and left.

“Different people have exposed her, even lawyers present in court faulted her decision. The NBA leadership also said that her judgement did not follow due process,” a judicial worker had told SaharaReporters.

Obot in the doctored report of the proceedings claimed she observed a young man in a red T-shirt who appeared to be making a video coverage in the gallery and she asked him to stand up.

She said the journalist said he was with Premium Times and that she was able to establish that he did not take permission from the court registrar to cover the proceedings.

According to her doctored account, she told the journalist to leave the courtroom but Effiong objected.

She said Effiong said, “This is an open court. It is wrong for you to send out the journalist. The journalist has every right to make a video recording of these proceedings. I cannot continue until the phone is handed over to the journalist to continue his work.”

According to her account, she asked, “Is he that same person you have been using, to run this court down?” “You want to ruin my good name which I have built for over 33 years,” she claimed to have added.

Obot also said she asked Effiong to continue with his cross-examination but he was “now shouting, pointing at the court and banging the table”.

She claimed Effiong said, “I have noted the manner this case is being conducted and I am not going to proceed. There are policemen everywhere and I cannot proceed, the journalist must be brought back to cover proceedings.

“You are only entitled to one orderly and one court duty policeman, if you do not order these two policemen out of the court, I will not proceed.”

She said she later asked him to 'derobe' himself but he declined, saying he was still addressing the court.

“You have gone beyond that, I am citing you for contempt for your unruly conduct and behavior in this court.” She said Effiong was still defiant and that she stated, “In that case, you are hereby committed to the custodial centre for one month until you purge yourself of the contempt.” 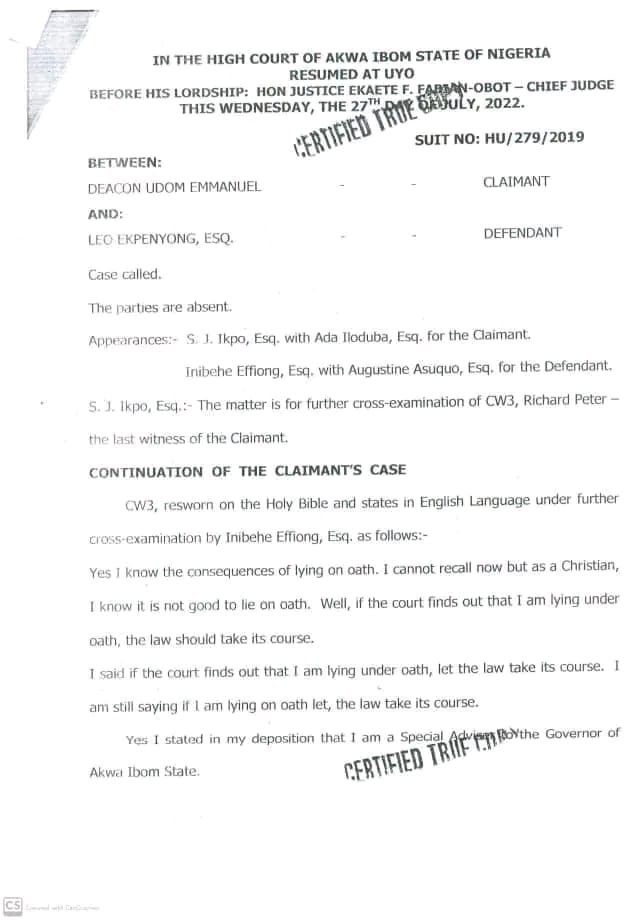 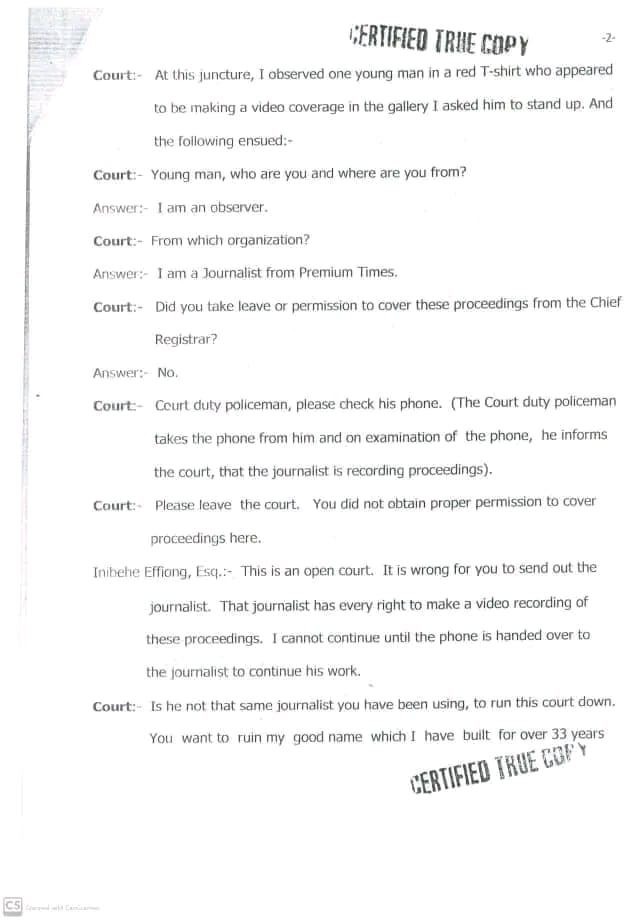 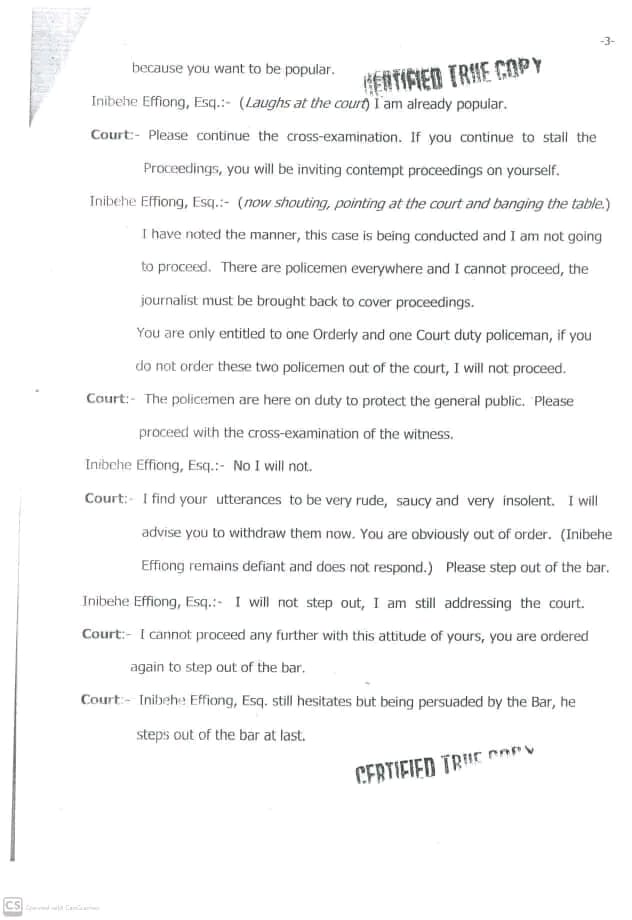 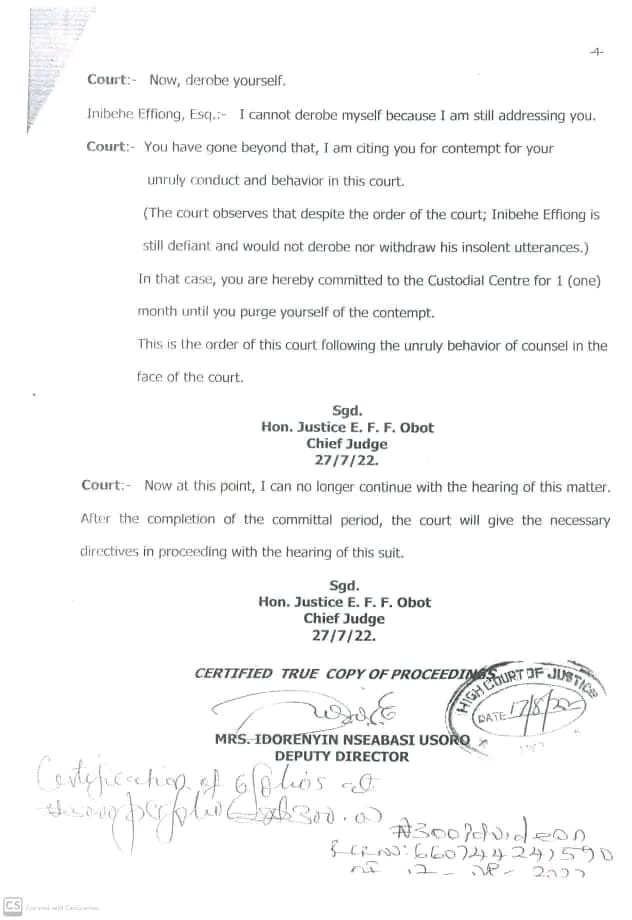 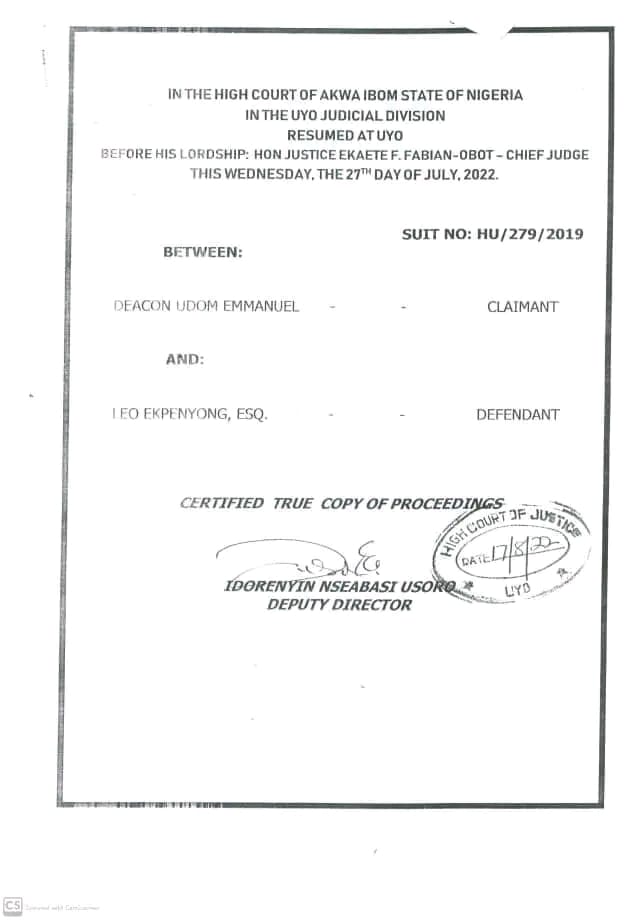 JUST IN: Days After Taking Over Sowore’s Case, Nigeria’s AGF Says He Can’t Order His Release

Buhari Reassures May 29 Handing Over Of Government Is Sacrosanct

Return Of The Abuja-Kaduna Rail Line, By Reuben Abati

Islamic Group, MURIC Appeals To Tinubu To Ensure Use Of Hijab In Lagos Schools