Eno was dragged to court by Akan Okon, a contestant in the May 25 PDP governorship primary election, over allegations that he (Eno) is parading a forged WAEC certificate.

Documents from the University of Uyo, Nigeria, have revealed that the governorship candidate of the Peoples Democratic Party (PDP) in Akwa Ibom State, Umo Eno, lied to the court about his West African Examination Council results and date of birth.

Eno was dragged to court by Akan Okon, a contestant in the May 25 PDP governorship primary election, over allegations that he (Eno) is parading a forged WAEC certificate in his bid to actualise his governorship ambition. 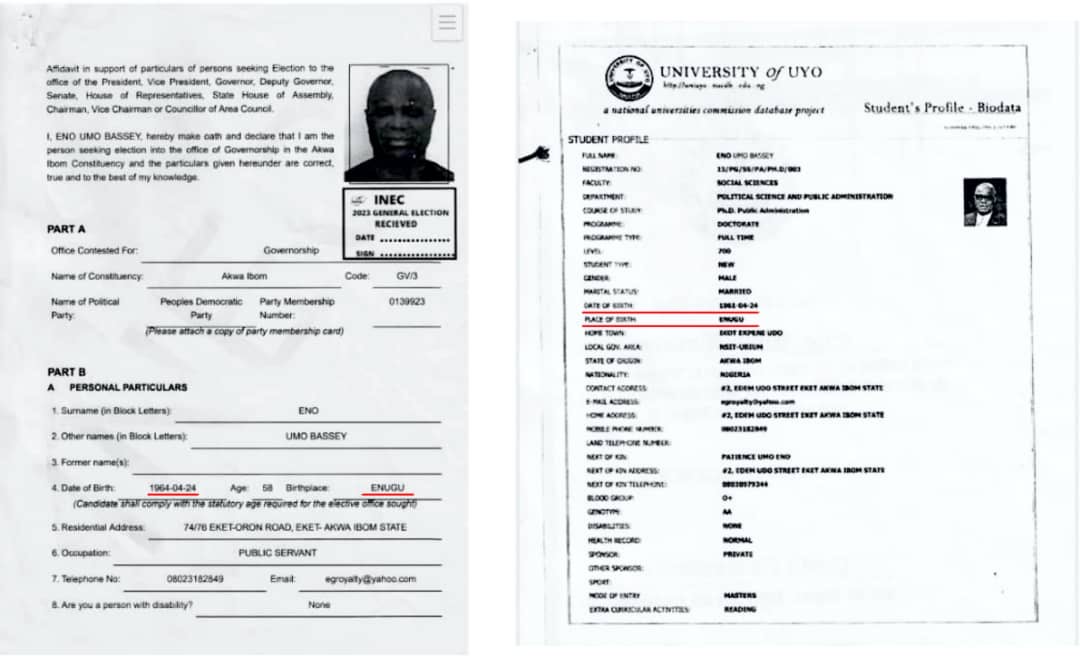 Okon also joined the PDP and the Independent National Electoral Commission (INEC) as defendants in the case.

SaharaReporters during the weekend exclusively obtained Eno's Student Information Form (SIF) from the University of Uyo where he gave 24 April, 1961 as his date of birth and Ikeja, Lagos State as his place of birth.

The same date of birth is reflected on his biodata in the University's database, certificate of birth from Ikeja Local Government dated December 20, 1982, and National Youth Service Corps certificate of exception dated September 5, 2005.

However, in his statement of defence in the ongoing case, Eno claimed that he was born in Enugu on April 24, 1964, and his certificate of birth was issued in Enugu. He swore under oath that he had never used any other date of birth apart from that.

"Neither the said Registrar nor his successor-in-title have ever disclaimed, challenged, refuted, or disputed the authenticity and genuineness of the 2nd Defendant's Certificate of Birth. 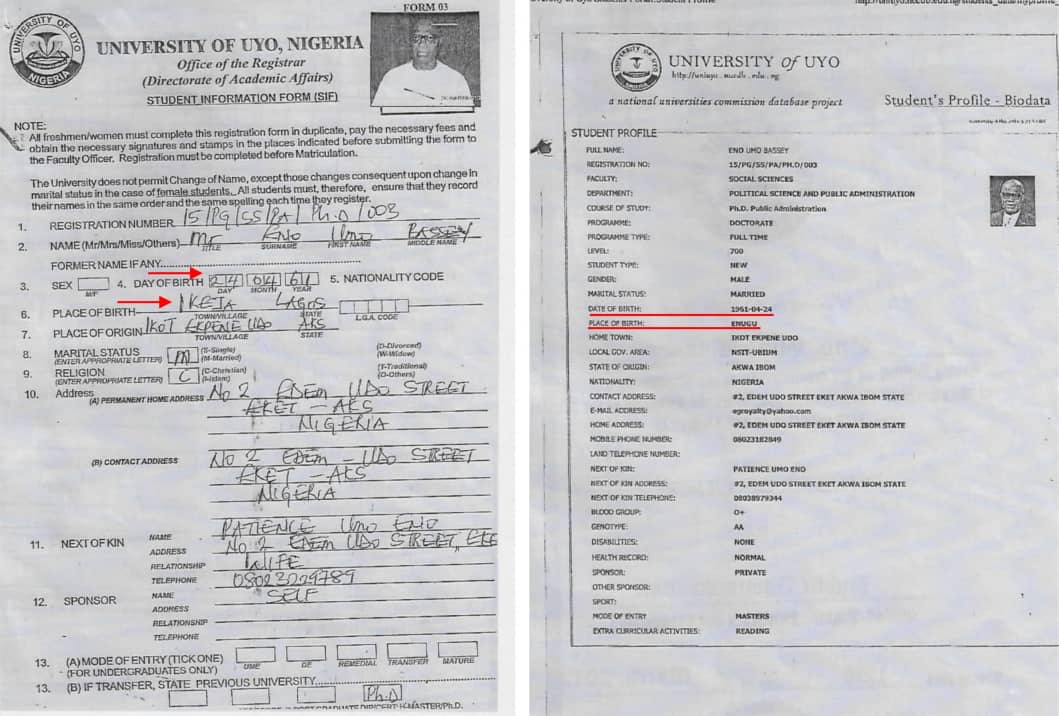 Further checks into Eno's academic records contained in the said documents from the university revealed that he (Eno) also lied to the court about his WAEC results.

In his earlier statement of defence, Eno argued that he used his 1981 and 1983 WAEC certificates to gain admission for his Bachelor of Science and master's degrees and said such certificates were not forged.

Okon, in his amended reply, revealed that Eno replaced the alleged forged WAEC results he presented for governorship screening with a different result for his postgraduate study.

He noted that the PDP governorship candidate's claims were false because details of his academic records showed that he (Eno) used another WAEC result obtained in 2002 for his postgraduate programme.

"In further answer to paragraph 13 of the 1st and 2nd Defendants' joint Statement of defence, the Plaintiff shall contend at the trial that the 2nd Defendant's claim of Bachelor of Science and Masters of Science degrees from the University of Uyo are predicted on his false claim to having duly obtained WAEC certificates in 1981 and 1983 respectively.

"To buttress this fact, the Plaintiff shall lead evidence at the trial to show that the 2nd Defendant abandoned these purported WAEC results whilst completing his postgraduate Student Information Form (SIF) submitted to the Postgraduate College University of Uyo, and presented yet a completely different one which he printed from the WAEC website- waecdirect.org, showing a WAEC result obtained in Nov/Dec WASSCE (West African Senior School Certificate Examination) 2002.

"The 2nd Defendant completed the form in duplicate and kept a copy thereof for his own records," Okon said.

There are strong indications that Eno decided to use a different WAEC result for his postgraduate study because he was not the original owner of the forged WAEC results and was afraid of being caught.

This would not be the first time Eno is caught in the web of substituting his academic documents. 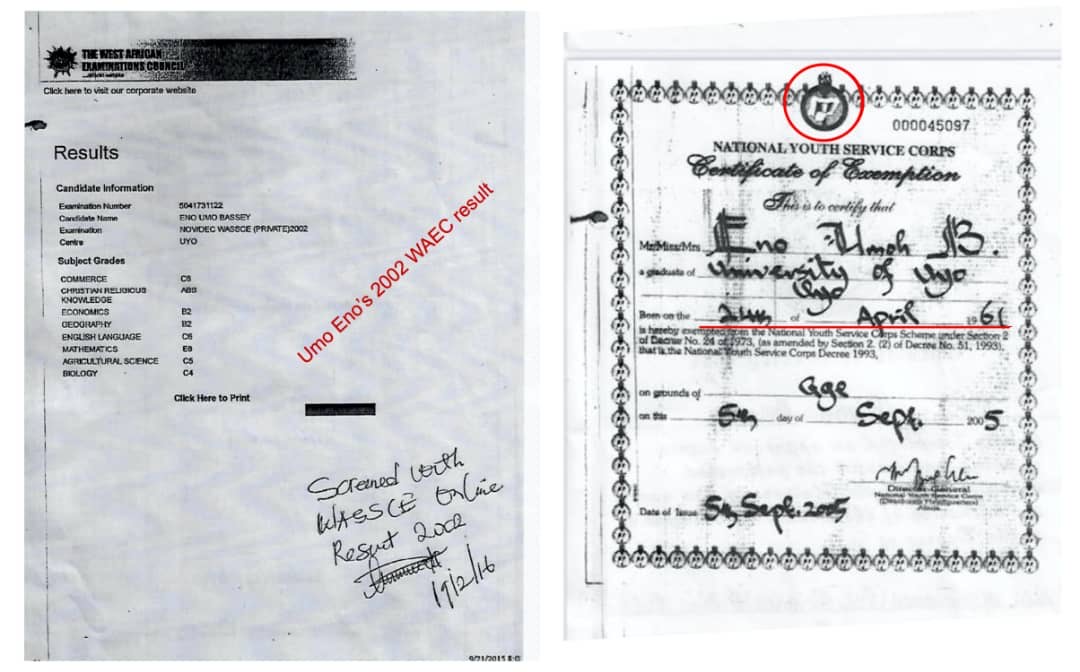 "The AADN letter is neither fake nor a forgery, nor did the 1st and 2nd Defendant report any matter to the Police as alleged, nor did the Police, AKS command conduct any investigation into the fact that the president of AADN wrote such letter and received the response from the Exams and Records section/department of WAEC dated the 8th day of April 2022.

"That the purported response dated 8th August, 2022, purportedly received from WAEC by the Police, now pleaded by the 1st and 2nd Defendants, neither emanated from WAEC nor does it bear the imprimatur of WAEC, nor does it have any relevance to this suit," he added.

The case which is before Justice Agatha A. Okeke of the Federal High Court, Uyo, was adjourned to Monday, 12 September, 2022 for day to day hearing.

How Abacha And Associates Stole Billions Of Dollars From Nigeria — Report

Terrorists May Have Followed Family Of Murdered Pregnant Woman, 4 Children From Northern Nigeria To Kill Them In Anambra – IPOB

Sowore: The Last Of The Radicals By Gimba Kakanda