The flyer was also shared on Facebook by the All Progressives Congress (APC) Imo State House of Assembly candidate for Isiala Mbano Constituency, Chief Sam Osuji.

Some parts of the Owerri-Okigwe road commissioned on Tuesday in Imo State by President Muhammadu Buhari are still in terrible condition, SaharaReporters has learnt.

According to the information on the flyer of the road commissioning programme by Ohazurumee Campaign Organisation (OCO), Buhari officially commissioned Owerri-Amaraku-Okigwe road.

The flyer was also shared on Facebook by the All Progressives Congress (APC) Imo State House of Assembly candidate for Isiala Mbano Constituency, Chief Sam Osuji.

According to some residents and users of the commissioned Owerri-Okigwe road, Governor Hope Uzodinma and the Buhari government deceived Nigerians by claiming the road was compoleted when “only Owerri to Anara part of the road was constructed while from Anara to Okigwe still remains a death trap.”

Attached with photos of President Buhari and others who attended the commissioning ceremony on Tuesday, the APC candidate, Osuji, had written on his Facebook page, “Presidency visits Isiala Mbano, commissions Owerri/Okigwe road, a project of 3R administration of Governor Uzodinma. 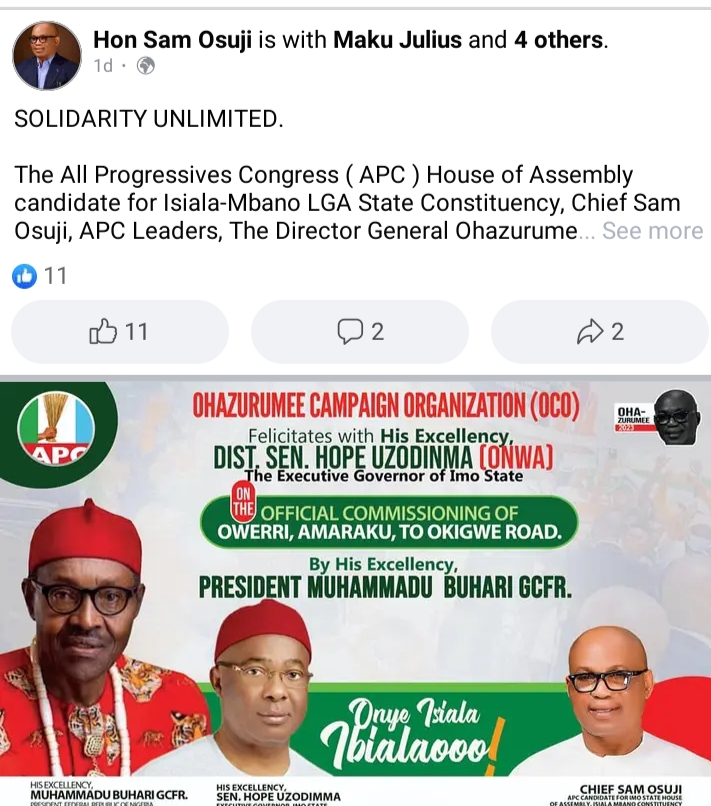 “Today, 13th September, 2022 is a memorable day in the history of Isiala Mbano Local Government Area, as the President of the Federal Republic of Nigeria stepped foot in the land for the first time.

“His Excellency, President Muhammadu Buhari GCFR stormed Amaraku for the commissioning of Owerri/Okigwe road, done by the 3R administration of His Excellency, Distinguished Senator Hope Uzodinma (Onwa), the Executive Governor of Imo State,” parts of the statement read.

But on the contrary, some residents and users of the commissioned Owerri-Okigwe road lambasted Governor Uzodinma for what they described as lies as they lament that only Owerri to Anara part of the road was constructed while from Anara to Okigwe still remains a death trap.

A Twitter user @IgwehAchebe, revealed the state of the road when he wrote, “The road Buhari came to commission in Imo State today is good from Owerri-Anara. From Anara to Okigwe is still under construction but again the commissioning is today. Our politicians shame dey shame me.

“Do you even know we slept on this particular road on Saturday night? One trailer fell on the road as the whole place is bad. If e sure for hope, let him drive from Owerri to Okigwe.”

But @nazyiwunjoku, wrote, “Boss the road is good from Owerri to Anara but from Anara to Okigwe is in terrible shape. If you frequent that road, you’d know buses divert from Anara Junction via Isiala Mbano to avoid that road completely. So he's not lying.”

Similarly, @drunbas, said, “I was surprised when I heard Mr. President was coming to Commission Owerri to Okigwe road because I recently passed through same road to Okigwe and truly, from Anara to almost Okigwe, they are still doing gutters. I hope that portion isn't abandoned tomorrow sha or another commissioning.”

Also, @licheng4love further confirmed the state of the road by saying, “On Friday last week I traveled to Okigwe from Oba old road to Nnewi then Akokwa because of bad road then Anara, from Anara to Okigwe is a death trap. I wonder how someone in Lag be commenting what he doesn’t know about because of politics.”

In a similar view, @Uchenna_Azorji said that “Hope Uzodinma is a disgrace. Last year, Buhari went to Imo to commission less than 5Km of the Nekede road. Yesterday I spoke to a friend who confirmed that the contractors have moved their equipment for purported lack of payment.”

Sowore: The Last Of The Radicals By Gimba Kakanda