The court ordered INEC to accept and publish the name of Godswill Akpabio as the candidate of the All Progressives Congress (APC) for Akwa Ibom North/West senatorial district in 2023.

The ruling of a Federal High Court in Abuja on Thursday confirmed SaharaReporters’ reports exposing how the Independent National Electoral Commission (INEC) has been compromised.

The court ordered INEC to accept and publish the name of Godswill Akpabio as the candidate of the All Progressives Congress (APC) for Akwa Ibom North/West senatorial district in 2023.

Justice Emeka Nwite, in the judgment, held that INEC acted illegally by refusing to accept and publish Akpabio’s name even when it was sent to it by the APC as its candidate.

Meanwhile, SaharaReporters had in the last few months reported how the compromised INEC under the leadership of Prof. Mahmood Yakubu could derail the 2023 elections.

SaharaReporters earlier quoted sources saying that Yakubu had agreed to some unethical and obnoxious conditions in his bid to secure a second term in office under the All Progressives Congress-led government of President Muhammadu Buhari.

The newspaper can confirm that the earlier reports are gradually playing out.

For instance, SaharaReporters had exposed an elaborate plan by INEC and the APC to impose Senator Godswill Akpabio and Senate President Ahmad Lawan as candidates of the ruling party for the senatorial districts even though the former did not participate in the INEC validated primary election while the latter failed to participate in the senatorial primaries of his party for Yobe North.

Bashir Machina had won the party’s ticket for Yobe North Senatorial District, while Udom Ekpoudom won the primary for Akwa Ibom North-West, which was monitored by INEC officials.

But INEC kept denying plans to scuttle the outcome of the primaries through several press releases, telling Nigerians that it stood by its report of the senatorial primaries submitted to it from the states and that both Akpabio and Senate President Lawan were not recognised as candidates.

However, the judgment of the Federal High Court on Thursday, September 15 has exposed INEC's complicity and connivance with the ruling APC to impose Akpabio and Lawan as candidates.

SaharaReporters had cited and is in possession of court documents from the Federal High Court 6 where the case of Rtd DIG Ekpoudum vs Akpabio was first instituted, with judgment to be delivered next Tuesday.

However, Akpabio in connivance with INEC Chairman, Yakubu instituted another suit at Court 7 in the same Federal High Court wherein only INEC was joined as a defendant. The processes cited so far and INEC’s presence in court has exposed the electoral commission despite its weighty responsibility of conducting the forthcoming general elections.

Findings by SaharaReporters also show that the various press statements of INEC vehemently stating that it would stand by its reports of the primaries monitored and submitted by its state offices, were deceptive.

When Ekpoudum filed his case at the Federal High Court in Abuja on June 27, 2022, in Suit No: FHC / Abj/ CS/ 1000/2022 –  Udom Ekpoudom Vs APC & INEC, the leadership of the electoral body delayed releasing the Certified True Copy of the primary election involving Akpabio to the winner. So, the matter was filed without the report until a series of reports by SaharaReporters exposed how INEC was refusing to issue the CTC of politicians it had vested compromised interest in their cases.

The stories later compelled the Commission to release the reports to lawyers awaiting them across the states to file cases for their clients.

From SaharaReporters' findings, INEC in connivance with Akpabio, who was already part of the first suit, filed the same matter under the name of APC in another court and sued only INEC.

“INEC lent itself to the chicanery since it was working with the ruling party as it did not join Ekpoudum whose name is in INEC’s senatorial primary report the body had repeatedly said it stood by.

“It was for the second case the controversial judgment with Suit No: FHC/AbjCS /1011 /2022 btw APC & Akpabio Vs INEC, was delivered,” a source privy to the matter told SaharaReporters on Friday.

Meanwhile, INEC, which was served process on the Ekpoudum vs Akpabio case, refused to file any written response nor submit its report that it had assured Nigerians it stood by in its press releases. Basically, it refused to say so in court and was never represented by any of its lawyers throughout despite being served with hearing notices. The judgment of the court will be delivered next Tuesday, September 21, 2022.

However, the leadership of INEC in Akpabio’s suit with the electoral body standing alone as the defendant filed a response process and was represented by its Counsel, one Hassan Aminu on Thursday for the judgment.

SaharaReporters’ investigation has also established what could have been an oversight, negligence or possible compromise on the part of the Chief Justice of the Federal High Court who signed the new supposedly pre-election Federal High Court Rules of sworn affidavit of non-multiplicity of the same matter, as the CJ reassigned the same subject matter already pending in Court 6 to Court 7 with a new suit number, which happens to be the only difference.

“The Director (Legal), Mrs Babalola and lawyers in the legal department, Tanimu, Hassan, Deputy Director Musa and officials of INEC Election and Political Party Monitoring Departments are all neck deep in the compromise and corruption in the Akpabio and Lawan saga.

“Just last week, an INEC lawyer was in court in a similar fashion and repudiated its senatorial primary report of Yobe state senatorial primary election matter in favour of Senate President Ahmed Lawan. Public outrage and condemnation of INEC action led to a retreat through a weak denunciation without disowning the lawyer,” another source privy to the matter said.

The source added, “The ongoing investigation of the handling of the outcome of party primaries monitored by INEC has shown that in various states where INEC has been compromised heavily, particularly APC-controlled states, INEC refused to defend the reports of party primaries monitored by its states offices in the court yet the same INEC through Festus Okoye, who is an INEC chief official described as the new "hand gun" of corrupt politicians had repeatedly through press releases said it stood by the reports of primary of state offices and that Akpabio and Lawan didn't win primaries.

“All these lies have been exposed by the Federal High Court’s strange and curious judgment imposing Akpabio as a candidate and that of the Senate President is underway.

“That was why INEC shamelessly in betrayal of public trust and the assurances it had given several times to Nigerians, showed up in court in the suit filed by Senator Akpabio where it is the only defendant and the same INEC was also in court to receive the judgment for quick compliance.” 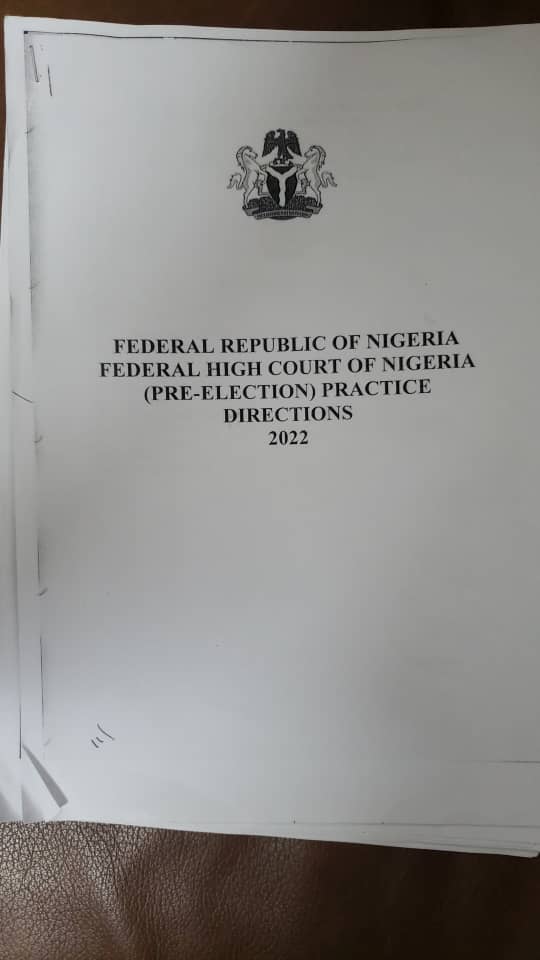 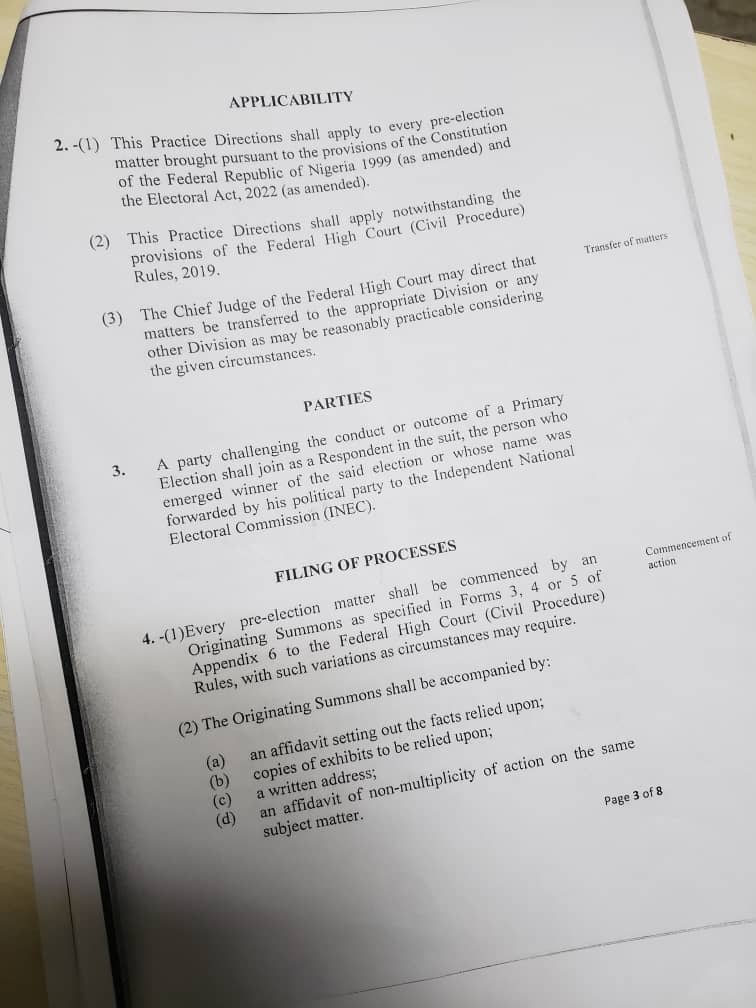 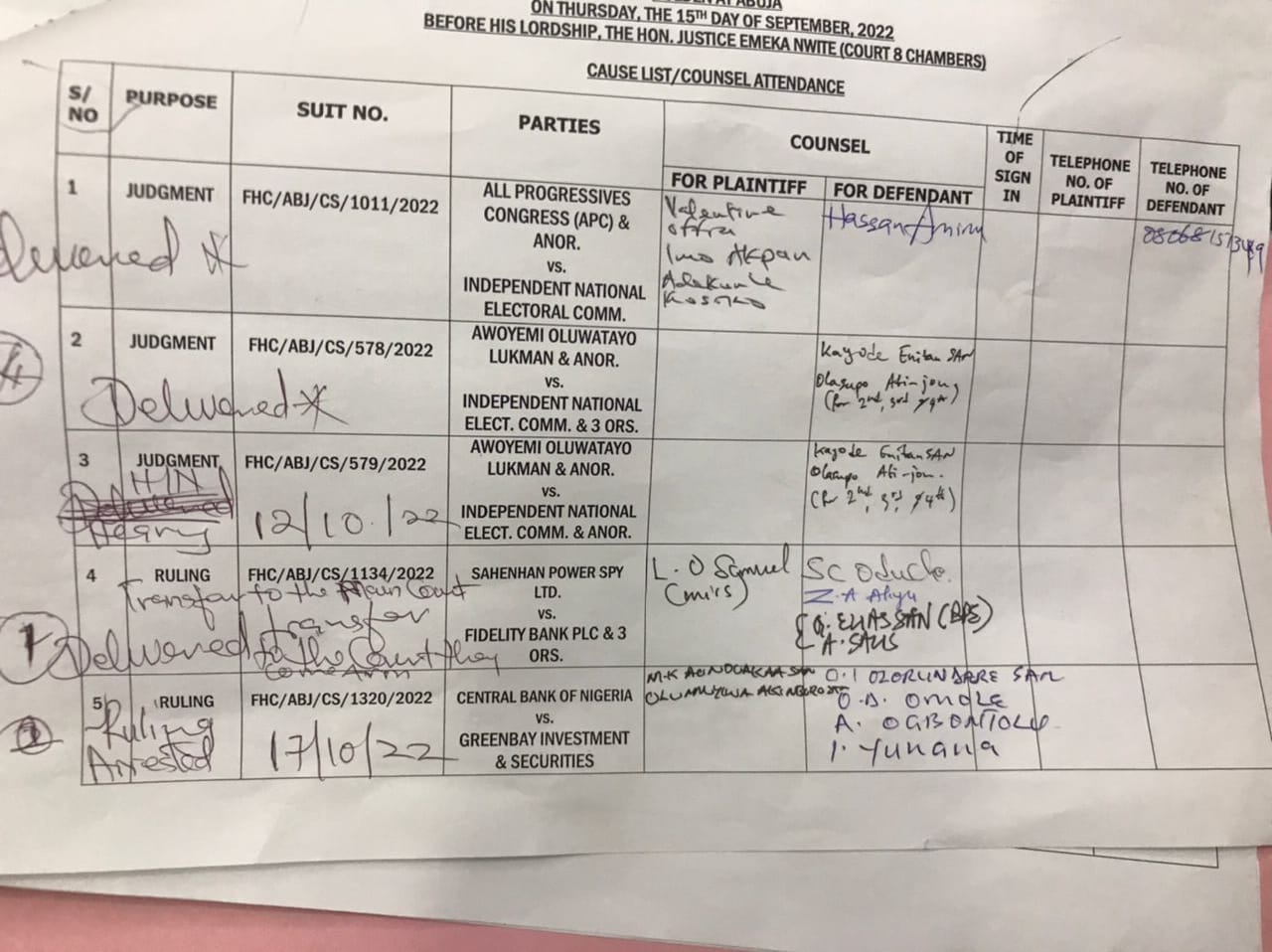 14 Farmers Die In Taraba Boat Accident, Many Others Missing

US Lawmakers Want Sanctions For African Country, Algeria Over Arms Deal With Russia