SaharaReporters earlier reported that even though students who took the examination paid their registration fees of about N18,000 each to the state Ministry of Education through their examination centres, the money was not remitted to the West African Examination Council (WAEC).

SaharaReporters earlier reported that even though students who took the examination paid their registration fees of about N18,000 each to the state Ministry of Education through their examination centres, the money was not remitted to the West African Examination Council (WAEC).

According to some of the students who spoke to SaharaReporters, the non-release of their results has stagnated their educational journey stagnant, describing it as a big hindrance to their journey in life.

Reacting, the group described the situation as painful and disclosed their move to mobilise all the concerned students for a massive peaceful protest if the government fails to do the needful within seven days.

This was disclosed in a circular released by group president, Muhammad Alfa Muhammad.

The statement reads: "It's painful and dehumanizing to let you know that the Niger State candidates for the 2022 WAEC examination are yet to get access to their results.

"More painful and dehumanizing is the fact that it was the parents who paid for the examination, and not the state government. 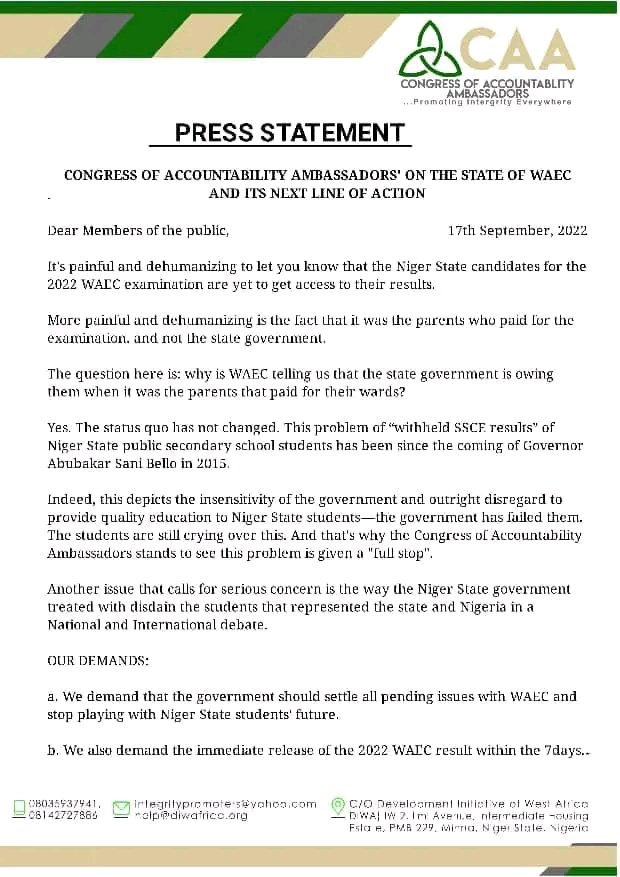 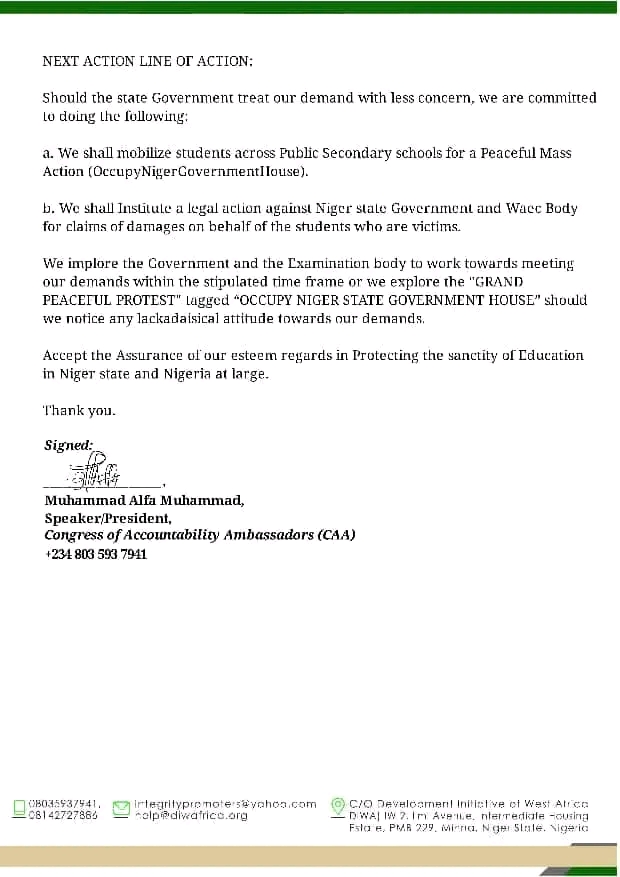 "The question here is: why is WAEC telling us that the state government is owing them when it was the parents that paid for their wards?

"Yes. The status quo has not changed. This problem of ‘withheld SSCF results’ of Niger State public secondary school students has been since the coming of Governor Abubakar Sani Bello in 2015.

"Indeed, this depicts the insensitivity of the government and outright disregard to provide quality education to Niger State students- the government has failed them. The students are still crying over this. And that's why the Congress of Accountability Ambassadors stands to see this problem is given a "full stop".

"Another issue that calls for serious concern is the way the Niger State government treated with disdain the students that represented the state and Nigeria in a National and International debate.”

The group listed its demands as follows: “We demand that the government should settle all pending issues with WAEC and stop playing with Niger State students' future.

"We also demand the immediate release of the 2022 WATC result within the 7 days.”

It further said, “Should the state government treat our demand with less concern, we are committed to doing the following: a. We shall mobilize students across Public Secondary schools for a Peaceful Mass Action (OccupyNigerGovernmentllouse).

"b. We shall Institute a legal action against Niger state Government and WAEC Body for claims of damages on behalf of the students who are victims

"Accept the Assurance of our esteem regards in Protecting the sanctity of education in Niger state and Nigeria at large," the group added.

TikTok Overtakes Google As Most Popular Site In 2021

Aishagate: We Are Better Than This, By Prof. Usman Yusuf

Your Government Failed On Security, Plunged Nigerians Into Poverty – 36 State Governors Hit Back At Buhari