The grumbling officers told SaharaReporters on Thursday that it was over 72 hours since their accounts were supposed to have been credited following the directive of the Inspector General of Police authorising the payment, but unfortunately, they were yet to receive alerts.

Some personnel of the Nigeria Police Force on Thursday told SaharaReporters that they were yet to be paid the six months arrears of the new salary structure President Muhammadu Buhari approved for the Force in 2021.

The grumbling officers told SaharaReporters on Thursday that it was over 72 hours since their accounts were supposed to have been credited following the directive of the Inspector General of Police authorising the payment, but unfortunately, they were yet to receive alerts.

"I have not been paid and I am still waiting for it. What I don't know is why the delay again," one of the police officers told SaharaReporters. 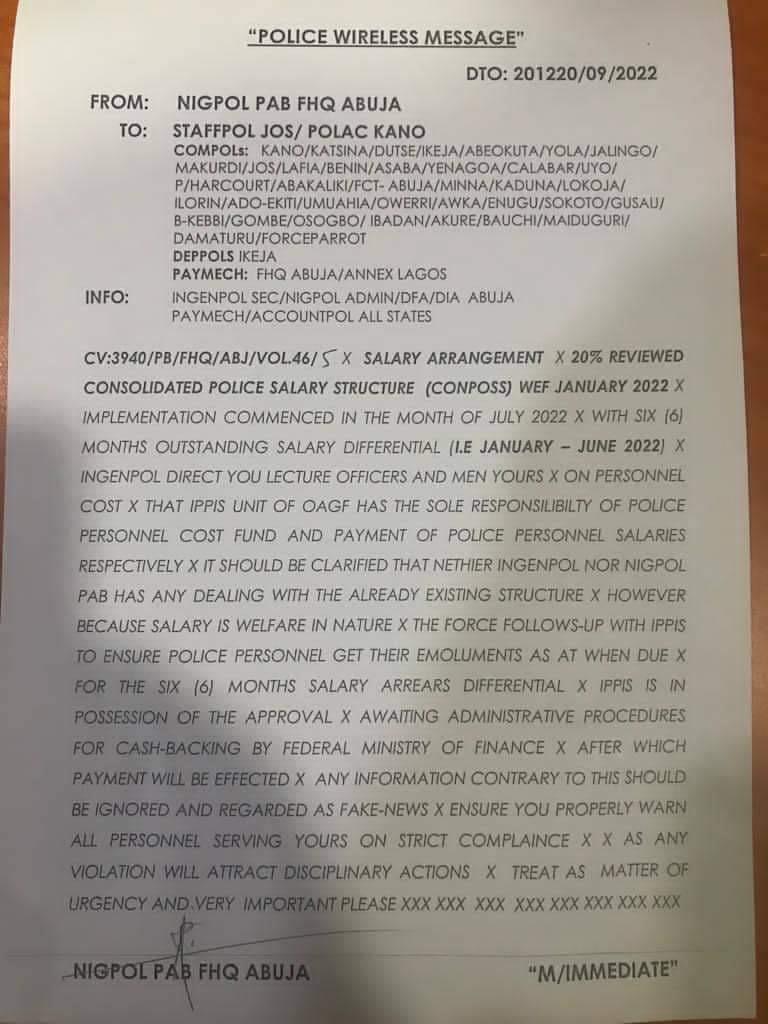 Another police officer who spoke to SaharaReporters on condition of anonymity, commended the organisation, saying, "I want to thank you for publishing that article concerning the new salary arrears of six months that the IGP has refused to pay since the federal government disbursed the monies to the police force, we were only paid July arrears instead of January to August 2022 and the remaining six months has not been paid up to this hour. I really appreciate this platform for always speaking the truth for Nigerians and I pray you will continue to do so. Thanks very much"

He, however, regretted that the attitude of Nigerian leaders has made it impossible to trust their statement, adding, "If they don't have any ulterior motive, why did they pay July instead of January?"

He added, "We don't trust Nigerian leaders in all sectors. Some of us rely on just our salaries because there are police officers who don't and will never like to work in a place where he or she will be subjected to intimidating the populace or collecting bribes from them. We only rely on our monthly salaries."

SaharaReporters earlier reported that the Nigerian Inspector General of Police, Usman Baba had approved the payment of the six months arrears of the new salary structure beginning from Monday, September 19, 2022.

It reported that the directive was a sequel to earlier reports of disquiet among policemen over how the leadership of the Force refused to pay up the six months arrears of the new salary scheme after the federal government had released the funds.

Some policemen had told SaharaReporters that the newly approved salary structure, which implementation was supposed to have commenced in January 2022, started in July with only one-month arrears of payment.

An inside police source told SaharaReporters on Monday that shortly after the report, IGP Usman was jittery and on Sunday, approved the immediate payment of the arrears across the commands.

However, 72 hours after personnel of the Force should have received their alert, the police are claiming that the federal government has not released the funds for the payment.

The police authorities in a wireless message referenced DTO: 201220/09/2022 from NIGPOL PAB FHQ Abuja to various police formations in Nigeria and titled: "INGENPOL SEC/NIGPOL ADMIN/DFA/DIA ABUJA PAYMECH/ACCOUNTPOL ALL STATES", which was obtained by SaharaReporters on Wednesday, said the finance ministry would have to approve the funds.

It said the payment would be done through the Integrated Payroll and Personnel Information System (IPPIS).

"INGENPOL direct you lecture officers and men yours on personnel cost that IPPIS Unit of the Office of the Account General of the Federation (OAGF) has the sole responsibility of police personnel cost fund and payment of police personnel salaries respectively. It should be clarified that neither INGENPOL nor NIGPOL PAB has any dealing with the already existing structure.

"However, because salary is welfare in nature, the force follow-up with IPPIS to ensure police personnel get their emoluments as at when due. For the six (6) months salary arrears differential, IPPIS is in possession of the approval, awaiting administrative procedures for cash-backing by Federal Ministry of Finance. After which payment will be effected. Any information contrary to this should be ignored and regarded as fake-news.”

"Ensure you properly warn all personnel serving yours on strict compliance. As any violation will attract disciplinary actions. Treat as matter of urgency and very important please," the message further reads.

Nigeria Police Force Has Only One Functional Helicopter—Trust Fund Trustees

Atiku Knows It’s Igbo’s Turn To Be Nigerian President, And That He Did The Wrong Thing–Ohanaeze

2023: North Won’t Repeat Mistake Of Voting Along Ethnic, Religious Lines Like In 2015 –Coalition Of Northern Groups

You Are Evil, Corrupt : An Open Letter To Peter Obi By Uloka Chukwubuikem