The former lawmaker in July 2020 sued the U.S.-based journalist, who had accused him of complicity in the murder of one Ogogo Blessing.

A Nigerian journalist based in the United States, Azuka Jebose has accused a former member of the House of Representatives, Ned Nwoko of using the Attorney-General of the Federation, Abubakar Malami and top operatives of the Nigeria Police Force to harass him.

The Delta State Police Command had declared the journalist wanted for allegedly defaming and cyberstalking Nwoko.

The former lawmaker in July 2020 sued the U.S.-based journalist, who had accused him of complicity in the murder of one Ogogo Blessing.

In a Facebook post, the journalist claimed Ogogo’s corpse “was found floating inside the pool” of a building that belonged to the former lawmaker.

He further accused the lawmaker of using his wealth and influence to stall the investigation into the matter.

Nwoko in his reaction filed a lawsuit alleging defamation of character and demanded N2 billion in damages including “public apology to be published by the defendants in at least two national daily newspapers circulating in Nigeria and social media platforms.”

According to him, the alleged defamatory publications in several online blogs and other social media platforms were aimed at denigrating his reputation.

Reacting to the police gazette declaring him wanted, the journalist said, “I call on all my friends on social media, especially the creative writers, colleagues and influencers to help me. Perhaps You have followed my fight for justice for my people abused and harassed by one of our native sons, Ned Nwoko.

“Notorious terrorist Ned Nwoko continues to use his affluence to taint justice, to command and control our judiciary, especially the Nigerian Police, as he torments, harasses, humiliates innocent young and old poor peasants from our Axis. For more than 2yrs, I continue to expose Ned Nwoko’s abuses on our people, including old weak widows in our homeland.

“Lately he had tried every possible means to silence my efforts, employing his relationship with the Attorney General of the Federation, mad Mallam Abubakar Malami to request the United States Department Of Justice to extradite me to Nigeria for possible assassination. Yesterday, they employed further tactics, using the Delta State Commissioner of police to publish in one of the national dailies a declaration that I am wanted. 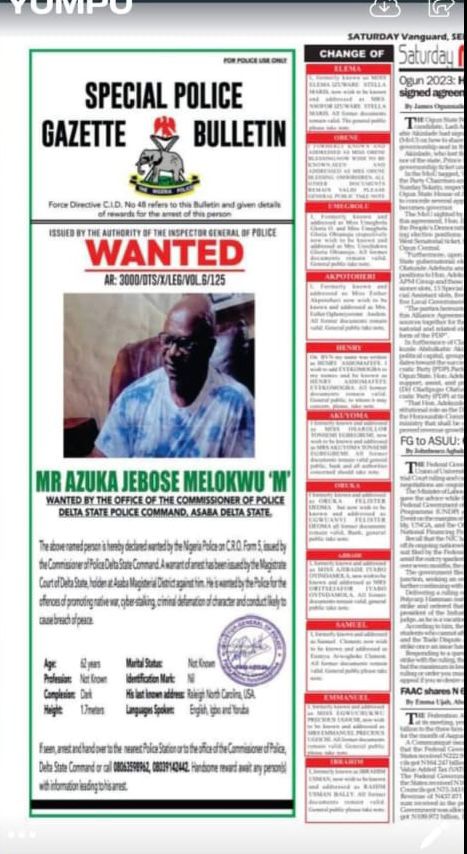 “I need friends like you to step on bravely and brazenly on social media to condemn police and Attorney General using federal might to protect Ned Nwoko, cover up his atrocities against my people, harass me and attempt to silence me. Can you help me? 'Abi' you dey fear?”

At Least 80 Killed In Kabul Bombing

A Humanist Perspective On Interfaith Dialogue In Nigeria, By Leo Igwe