Unit commanders were asked to sensitise their personnel to the need to strictly and instructively adhere to the ban.

The Nigerian Army authorities have asked personnel to stop embarking on journey in military uniform over the security challenges confronting the country.

In a memo dated September 21, 2022 exclusively obtained by SaharaReporters, soldiers were also asked to stop displaying military accoutrements in their private vehicles.

Unit commanders were asked to sensitise their personnel to the need to strictly and instructively adhere to the ban.

“The current security environment across the country calls for more proactive measures to address the evolving threats, especially the personal security of NA personnel on leave or pass without military escorts. Sequel to this, References A to C directed formations and units on the need to adhere to directives prohibiting personnel from traveling in NA uniforms,” the memo read. 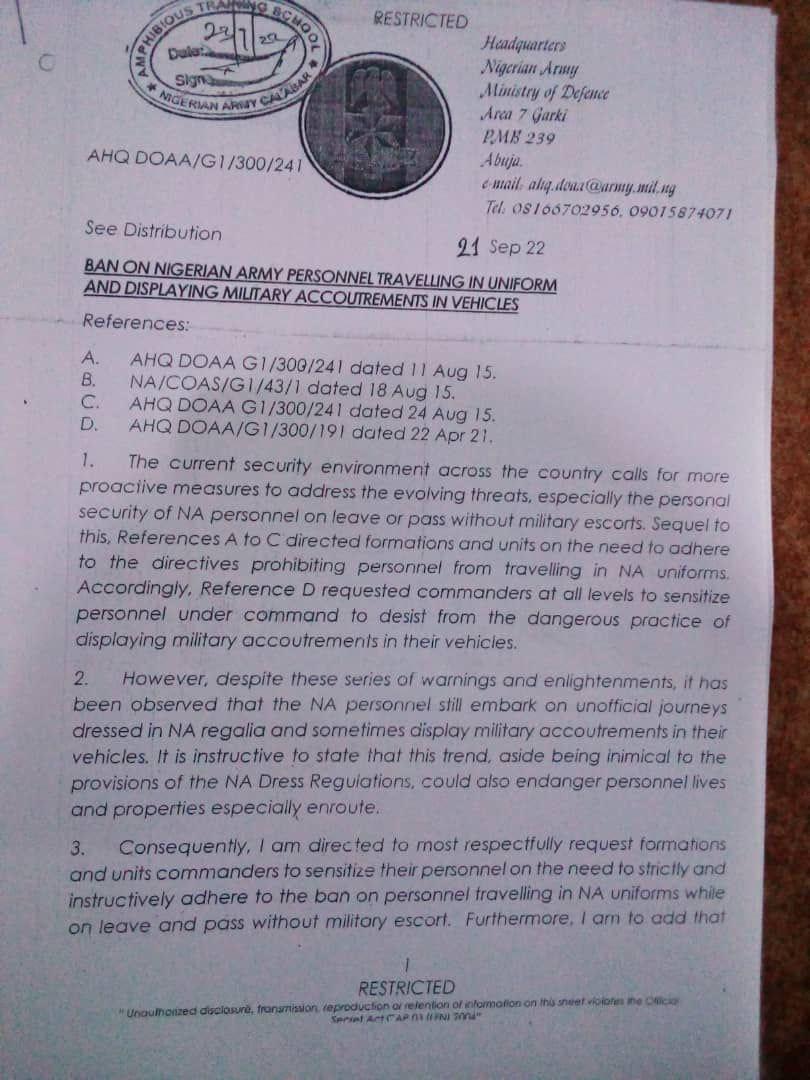 “Accordingly, References D requested commanders at all levels to sensitise personnel under command to desist from dangerous practices of displaying military accoutrements in their vehicles.

“However, despite these series of warnings and enlightenments it has been observed that the NA personnel still embark on unofficial journeys dressed in NA regalia and sometimes display military accoutrements in their vehicles. It is instructive to state that this trend, aside being inimical to the provision of the NA Dress Regulations, could also endanger personnel lives and properties especially en-route.

“Consequently, I am directed to most respectfully request formations and unit commanders to sensitize their personnel on the need to strictly amd instructively adhere to the ban on personnel traveling in NA uniforms while on leave and pass without military escort.”

The action comes amid worsening security challenges the military is currently combating in most parts of the country.

This is coming a few weeks after gunmen suspected to be bandits killed a soldier in Kebbi State.

He was on his way to visit his parents in Zuru, Kebbi State when the gunmen ambushed a commercial vehicle he boarded.

The gunmen were said to have opened fire on Umaru, who was dressed in mufti, after they saw an army ID card with him. He died on the spot.

Why Naira Redesign May Be Declared Illegal, Unconstitutional If Challenged In Court – Falana-Led Group, ASCAB