Four members of the National Working Committee (NWC) of the Peoples Democratic Party (PDP) have returned about N120million paid into their accounts by the leadership of the party.
The party officers are the Deputy National Chairman (South) Taofeek Arapaja; National Vice Chairman (South South), Chief Dan Orbih; National Vice Chairman (South West) and National Women Leader, Prof. Stella Affah-Attoe.
While Arapaja got N36 million of the said money transferred into his bank account, the three others got N28.8 million each.
“I observed a malicious story reported in the Nations Newspaper of 26th September, 2022; where it was alleged that members of the National Working Committee were offered humongous amount of money to silent us over an allegation of financial misappropriation to the tune of fifteen billion Naira (N15,000,000,000).
“This led me to browse my phone through various alerts and I discovered a transfer of Thirty-Six million Naira (N36,000,000) from the party. I have personal reservation about the money transferred to my account and for personal reasons wish to return it accordingly,” the letter signed by Arapaja to the PDP National Chairman read.
The PDP has been in turmoil since former Vice-President Atiku Abubakar was elected as the standard bearer of the major opposition party.
The rift deepened after Nyesom Wike, governor of Rivers State, was overlooked by Atiku in the selection of his running mate.
The crisis worsened as Wike’s allies jettisoned campaign responsibilities, and insisted that Iyorchia Ayu, the party’s National Chairman, must be removed.
“I hereby inform you of the refund of the Sum of Twenty Eight Million Eight Hundred Thousand Naira (#28,800,000:00) back to the Peoples Democratic Party, Account Number: 1000095003 at Globus Bank PLC. The receipt of the payment back to the account is attached,” Effah-Attoe in her letter said.
She claimed that when she inquired about the N28,800,000,00 paid to her account, she was told by Ayu’s office that the amount was for house rent for two years as NWC members.
The letter read, “When I enquired from your Office, I was told that the said sum is for Two
(2) years House Rent for me, as a member of The National Working Committee.
“Since after the lodgment of the money into my Bank Account, I have been inundated with many phone calls from Party members, friends, family members and the general public, insinuating that the said money has been given as a Bribe to bring me and other NWC members on the side of The National Chairman, following the crisis between him on one side and the Governor of Rivers State, H.E Governor Nyesom Wike/ Wike’s Group on the other side.
“In addition, some National Newspapers/Social Media Platforms have also carried stories accusing the NC members of being placated with Bribe of N28,800,000.00.
“This development has made me very uncomfortable. Having found myself in such an the embarrassing situation, I am hereby refunding to the Bank Account of our Great Party at
the PDP National Secretariat.” 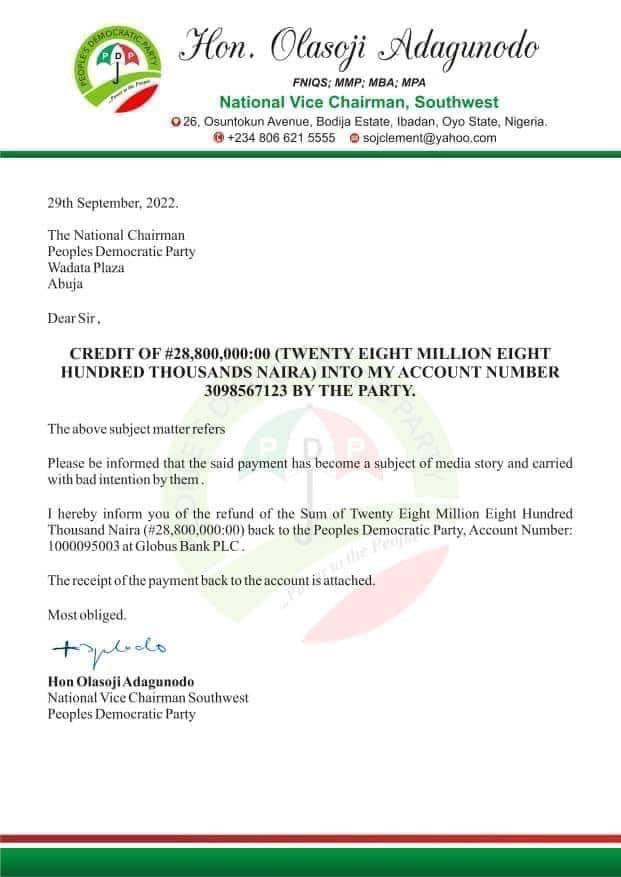 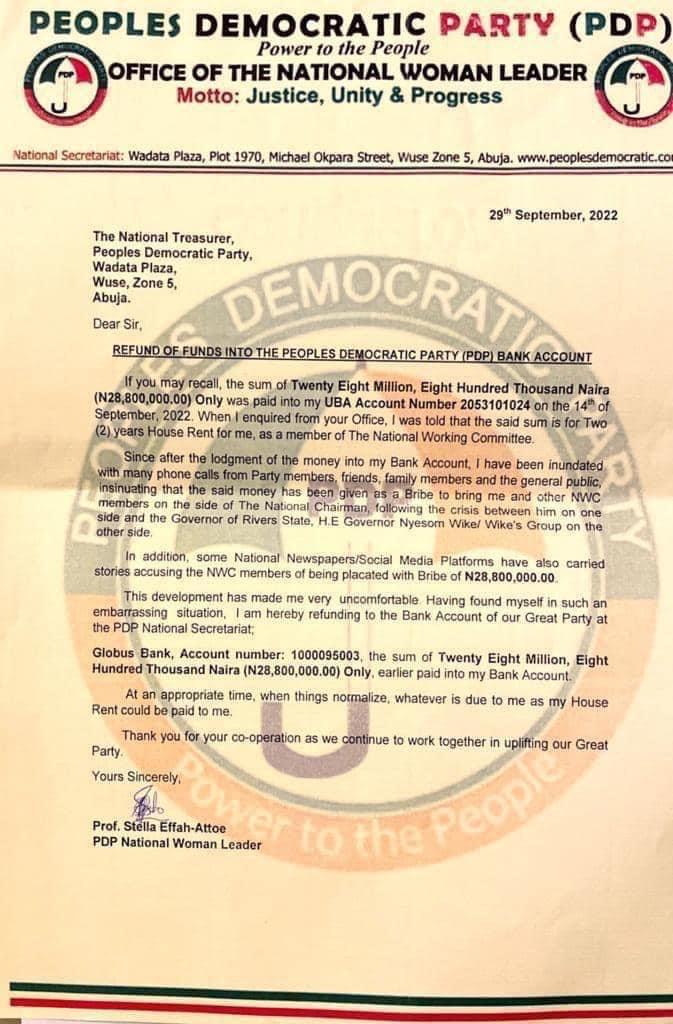 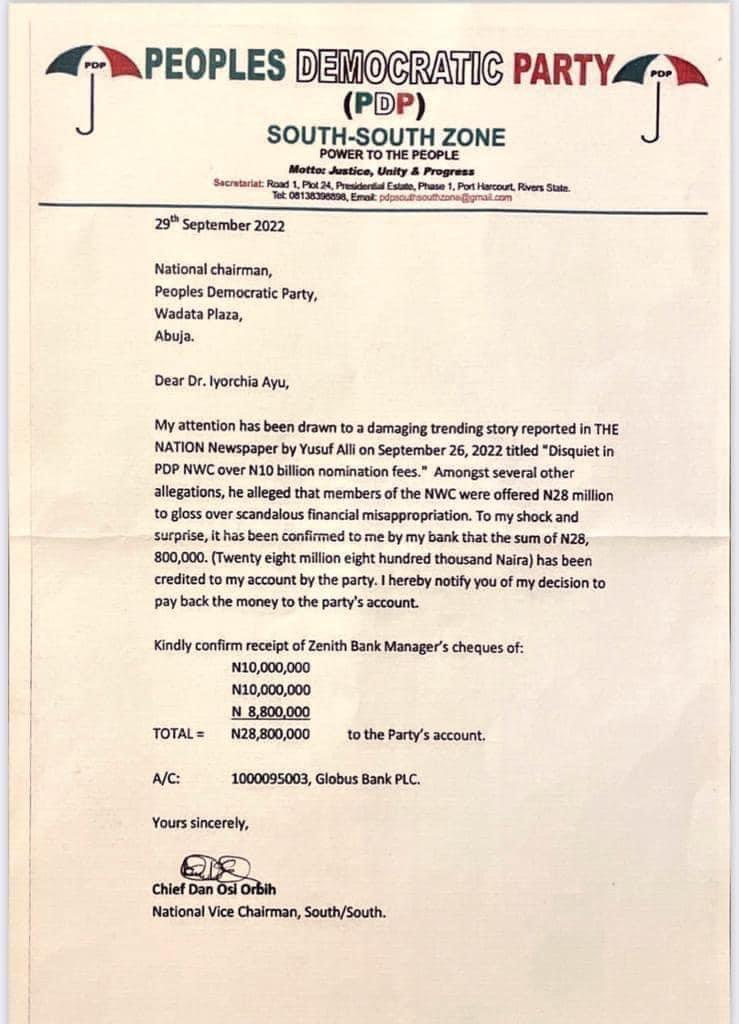 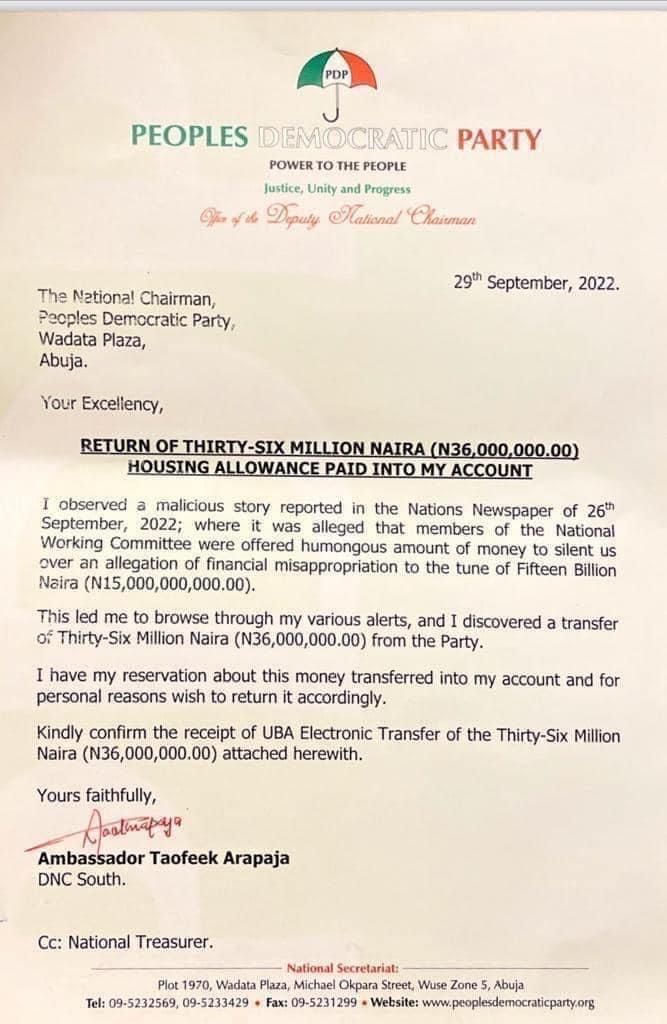 Creating Light Out Of The Darkness: Take It Back Volunteers Create A Library For Community School In Ogun

No One Has Accused Atiku Of Being A Drug Baron Or Drug User, Unlike Tinubu Who Is Mysteriously Controversial –Melaye

Documents: How Ogun Hospital Medical Director, Musa-Olomu Falsified His Age To Prolong His Stay In Service