NANS stated this in a Freedom of Information (FOI) request letter signed by the union’s National Secretary, Usman Baba Kankia, asking the commission to confirm the truth or otherwise of the claim that it spent N14billion for personnel costs annually.

The National Association of Nigerian Students (NANS) has written to the Director-General of the National Pension Commission, Aisha Dahir-Umar, demanding an explanation on the allegation that she bribed her way to be confirmed as the substantive Director-General of the commission.
NANS stated this in a Freedom of Information (FOI) request letter signed by the union’s National Secretary, Usman Baba Kankia, asking the commission to confirm the truth or otherwise of the claim that it spent N14billion for personnel costs annually.
The group further requested for the total number of people under the payroll of the commission and insisted the commission is bound to reply within seven days after the receipt of the latter.
The letter titled, “APPEAL FOR INFORMATION AND DOCUMENTS MADE PURSUANT TO THE FREEDOM OF INFORMATION ACT, 2011 REGARDING PENDING ALLEGATIONS AGAINST YOU BOTHERING ON MASSIVE CORRUPTION, DIVERSION OF PUBLIC FUNDS, UNPROFESSIONALISM AND FLAGRANT ABUSE OF PUBLIC OFFICE” reads:
“By way of introduction, the National Association of Nigerian Students (NANS) is the apex umbrella body of all students of Nigerian origin studying both at home and in diaspora. NANS has been at the forefront in the fight against corruption, injustice and economic sabotage as vigorously being led by President Muhammadu Buhari, GCFR. Our organisation has played vital role in rescuing the soul of Nigeria from the hands of public officers who deliberately turn themselves into scavengers with the aim of milking the economy dry.
“As the proverbial watchdog of the society, NANS believes that public office should be held on trust for the overall benefit of the masses and nothing more. Therefore, rather than allow corrupt Public Officers bring Nigeria to its kneel through various acts of conspiracy, unprofessionalism, reckless looting and unlawful diversion of public funds into private use, we have resolved to be on the part of posterity by consistently ensuring that any Public Officer found wanting in the performance of her statutory g to face the full wrath of the Nigerian Students and the Law.
“The responses to our questions will enable us make clarifications and clear the doubts of Nigerian Students as to your involvement or otherwise in bribery, corruption, looting, flagrant abuse of office and unlawful conversion of public funds into private use. Kindly answer the following questions: -
“1. How many staffs are under the payroll of the National Pension Commission (PenCom) and what is the statutory salary of the entire staffs of the commission?
“2. Is it true that the yearly budget for Personnel Costs in the National Pension Commission (PenCom) is 14 billion Naira?
“3. If the above question is true, can you furnish with information and relevant documents on how you intend to expend such funds?
“4. Apart from being a serving DG of PenCom, are you also into other business ventures?
“5. Do you have any Limited Liability Company registered in your name or that of your Spouse and Children?
“6. What can you say about the allegations levelled against you that you bribed your way to be confirmed the Substantive DG of PenCom?”
“We expect that the above information and documents will reach our Secretariat within 7 (Seven) days from the date of the receipt of this letter pursuant to Section 4 (a) of the Freedom of Information Act, 2011. In the event that we do not hear from you as requested herein, we shall not hesitate to stage a daily Mass Protest against your person until you're suspended or pushed out of office. These actions will not also preclude us from authoring petition to the Economic and Financial Crimes Commission (EFCC), Independent Corrupt Practices and Other Related Offences Commission (ICPC) and other relevant agencies with the aim of causing them to jumpstart thorough investigation into your activities as a Public Officer,” the group added. 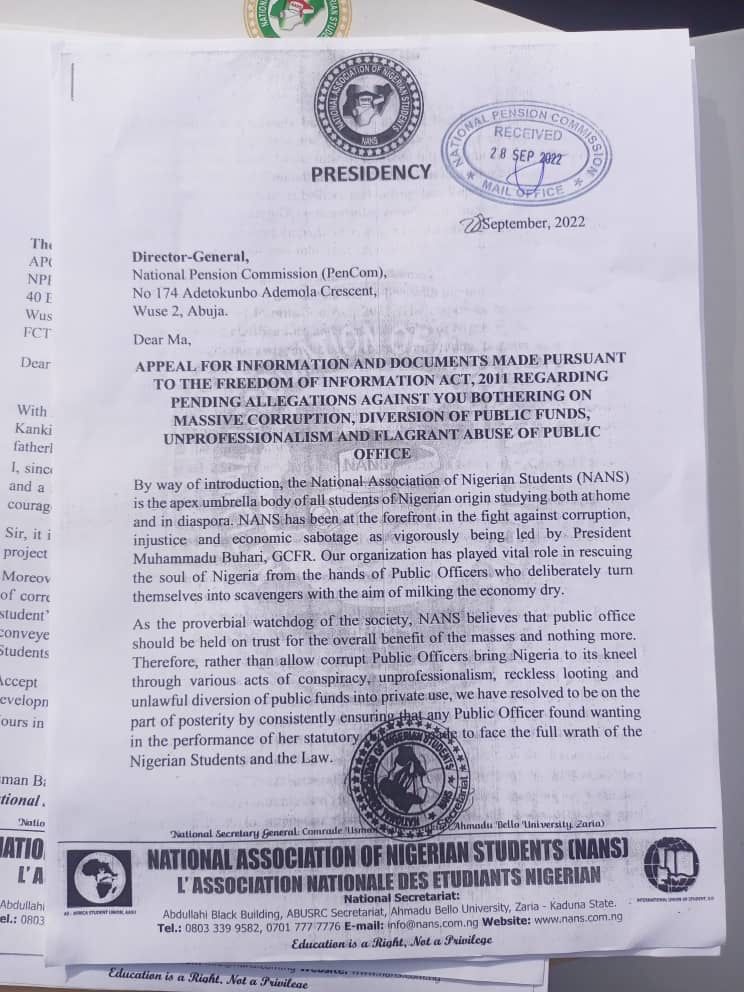 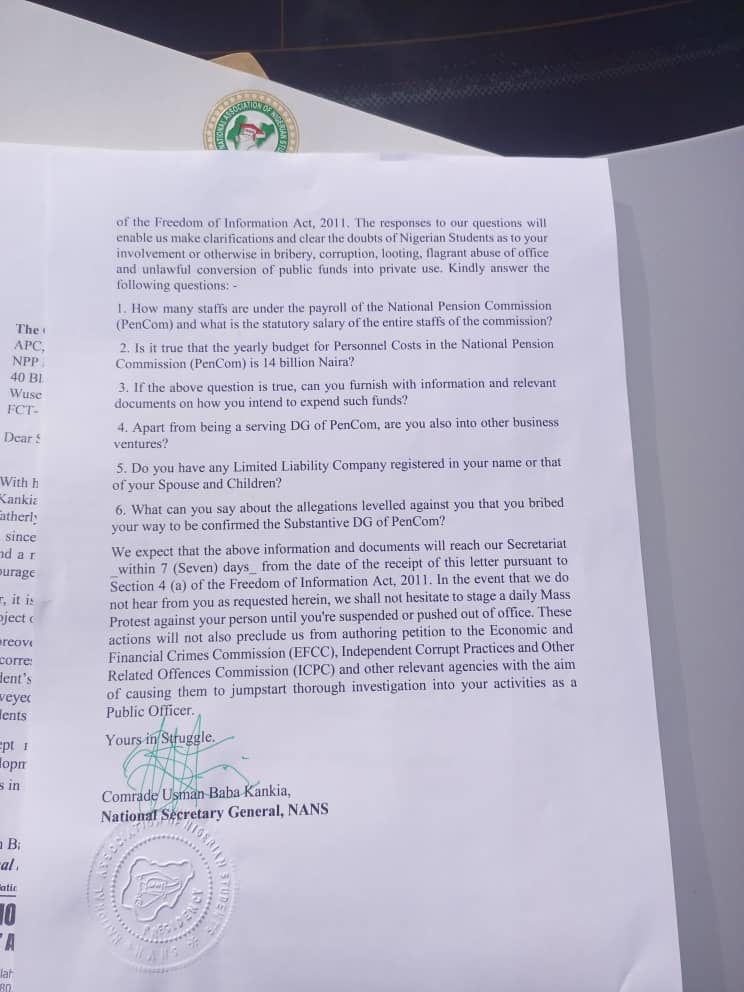 CAMA Is A Sinister, Demonic Attempt To Stifle The Church, Bishop Oyedepo Says

The New CBN Policy, The Talibanisation of the Polical Economy, By Adewale Adeoye

Oil Derivation Refund: A Demand For Immediate Release Of 40% To Oil Producing Communities In Ondo State, By Allen Sowore Esq