Awarded at varying times between 2018 and 2021, contracts for the repair of many failed sections of the road were awarded to about 10 different companies, some of which were even unqualified for the jobs — thus prompting suspicion of misappropriation and embezzlement of public funds.

The federal government has spent about N1billion in repair works to salvage the already decayed Bauchi-Gombe Highway, but the road remained a nightmare for motorists, occasioned by killer potholes and numerous failed sections due to questionable contracts and shoddy execution.

Awarded at varying times between 2018 and 2021, contracts for the repair of many failed sections of the road were awarded to about 10 different companies, some of which were even unqualified for the jobs — thus prompting suspicion of misappropriation and embezzlement of public funds.

The road which claimed lives and property that could hardly be quantified forced motorists to even begged for the reversal of the road to its old state before the ongoing, and ‘not-seems-to-end, agonizing’ rehabilitation. 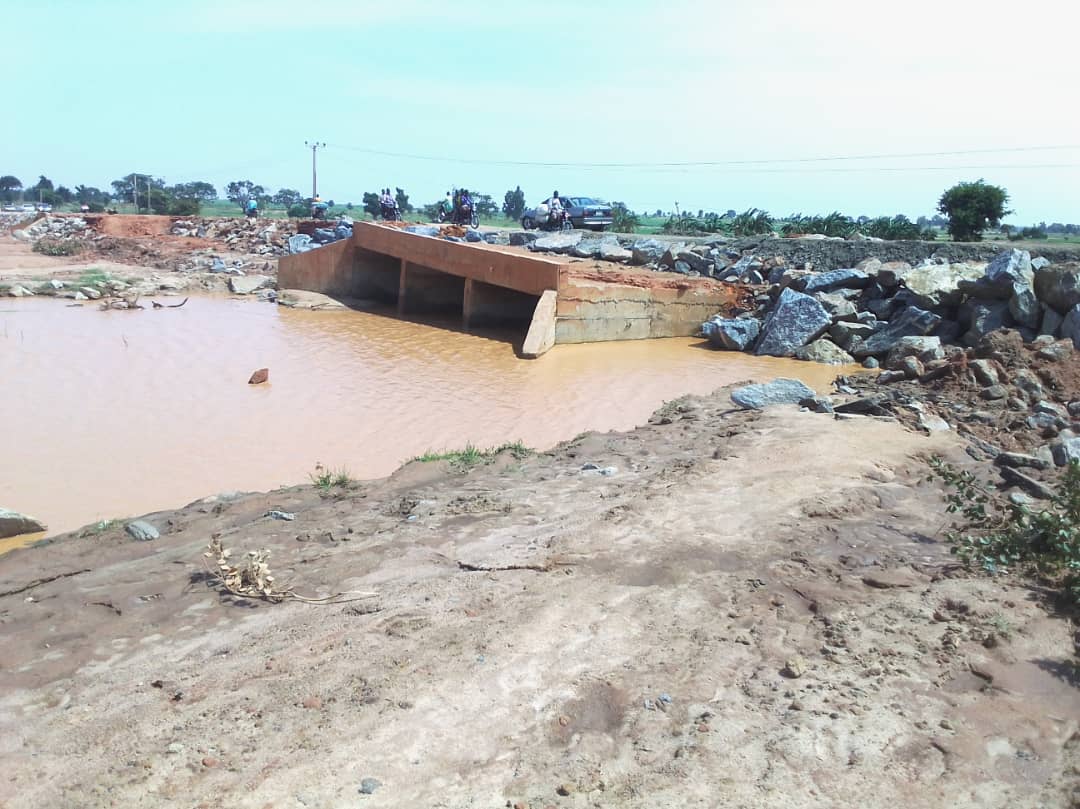 Funds were disbursed to revamp failed sections of the highway, including collapsed culverts and perhaps needless, but not traceable streetlights.

Instead of making the road motorable, the interventions, according to WikkiTimes’ findings, exacerbated the situation, as the purportedly rehabilitated sections kept on failing, coupled with an increasing number, depth and width of killer potholes. 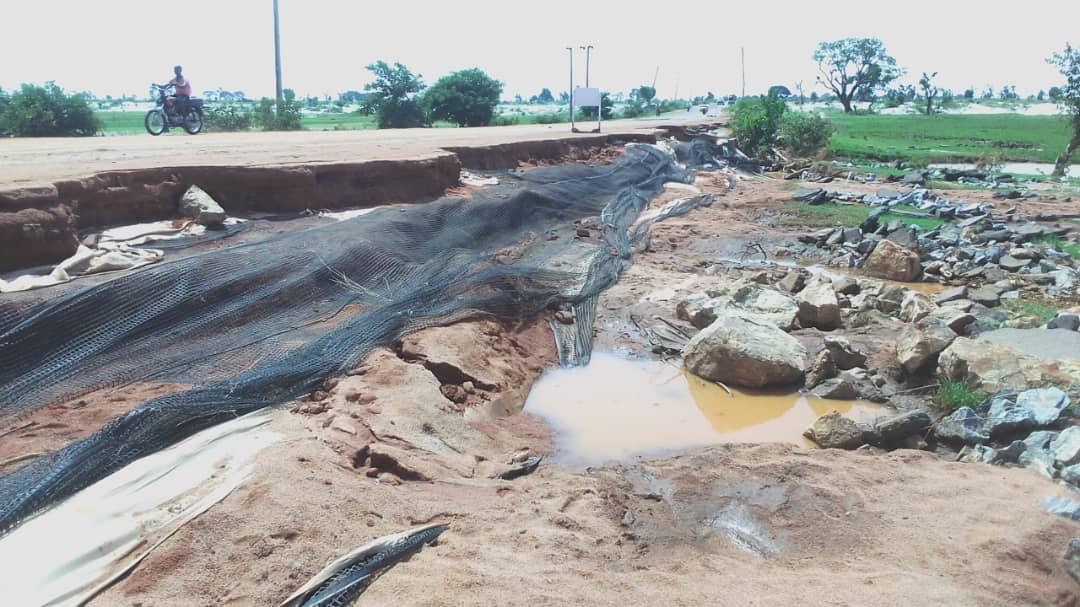 With the recent being in 2017, the disbursement of funds for the decaying Bauchi-Gombe road lasted for four years and still counting. WikkiTimes traced an aggregate of N928,461,482 million paid by the Federal Ministry of Works and Housing to different companies. 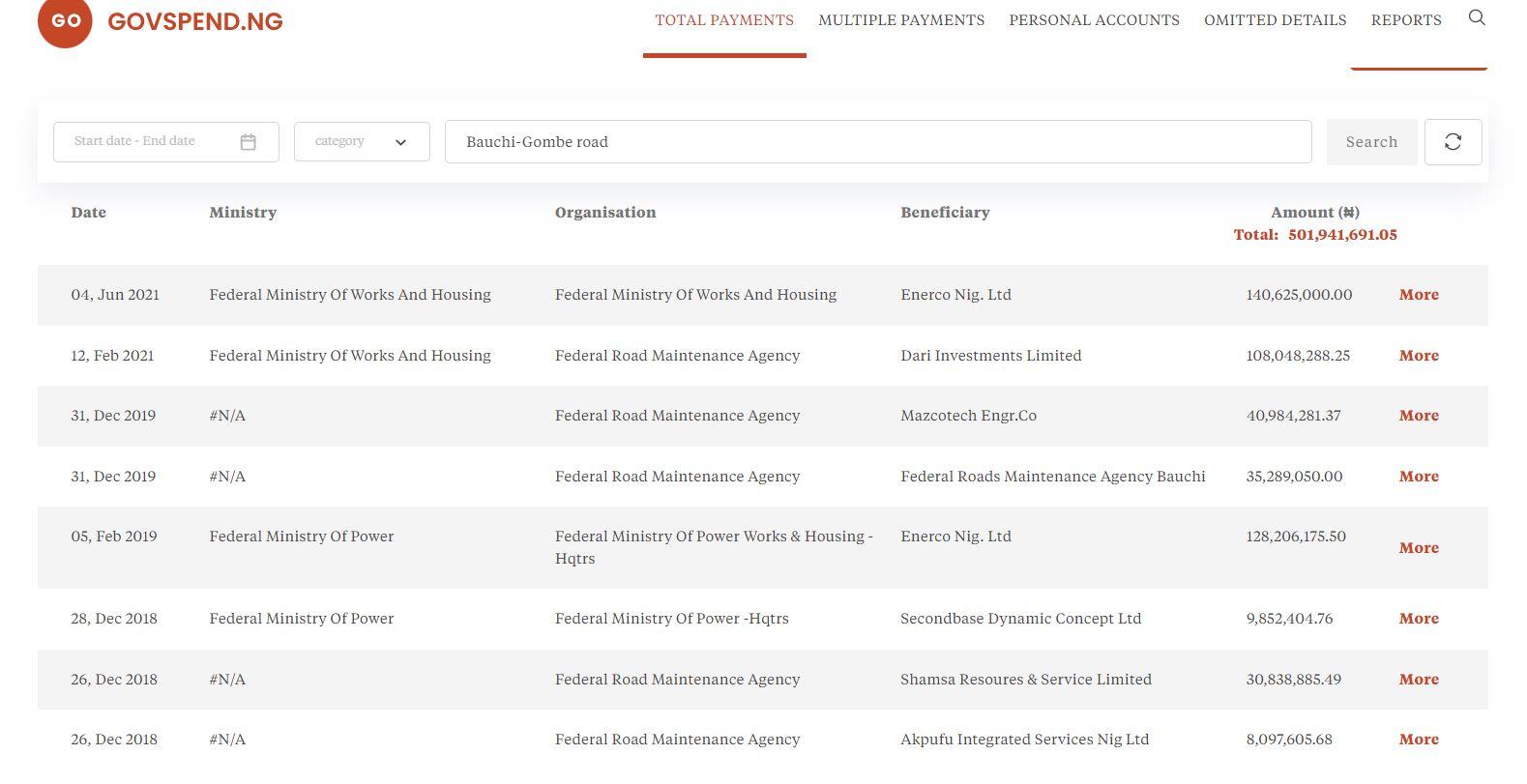 Some of these companies had no relationship with road construction. For instance, Dari Investment Limited is an oil and gas firm. However, it was awarded N108,048,288.25 on February 12, 2021, with the description: “Payment for general maintenance & repairs of Bauchi-Gombe Road in Bauchi State.”
On March 12, 2021, N56, 006, 185. 96 was paid to Hongkai Nigeria Limited with the caption: “Being payment for the clearing dressing of Bauchi-Gombe road.” However, the company’s details could not be found anywhere. A search on the Corporate Affairs Commission’s website and other platforms yielded no detailed results.

Checks by WikkiTimes showed that BNP RESOURCES LTD is an oil and gas company which lacks the jurisdiction and commensurate expertise to construct or supply solar-powered lights. Findings by the medium revealed that the company has no traceable history of undertaking construction work or delivering solar energy. In addition, Shamsa Resources and Services Ltd was paid N30,838,885.49 on December 28, 2018, as “payment for emergency repairs of sections of carriageway along Bauchi-Gombe Road.”

Despite being the gateway to four northeastern states of Adamawa, Borno, Gombe and Taraba States, coupled with all the mindblowing releases for the rehab of the road, it remains an eyesore, a death trap for countless innocent Nigerians.

A heavy downpour on June 30 and July 1, 2022, expunged two major culverts at Tashan Turmi, along Bara community, Bauchi-Gombe road, leaving motorists to take another route, and forcing travellers and traders to split their journey into two.

According to WikkiTimes’ findings, the distance between Tashan Turmi and Gombe is about 30 kilometres. It is triple that, compared to Bauchi State.

The territorial bond between the two states was breached. This was tackled by a sudden motor park at the two ends.

Travellers from both states would alight at the broken edges of the culverts and take the muddy walkway and debris from the collapsed culverts — to continue their journey.

When WikkiTimes visited the collapsed bridges, traders from both states were seen engaging the services of porters who would lift their goods to either the Bauchi or Gombe section of the broken road before they could continue their journey.

Locals in the community are doubly victimised, if not more. The prolonged, yet not-ending rehabilitation, coupled with ravaging flooding, does not only destroy their houses but their farmlands, and livestock. The government of Bauchi State during its visit to the debris site of the collapsed bridge vowed that it would be reconstructed in a week’s time. This, as underscored by residents and road users, would be hard to achieve.

“They had come to speak their grammar,” chorused a group of drivers stranded at the Bauchi section of the collapsed road. They strongly believed the work, “if done well,” would exceed a month. “Not just a week. It is not possible.”

However, the government fulfilled its promise. Yet, the road users feared a one-time rain could wash away the “rush work” they did.

Heavy flooding has not only submerged waterways from Bauchi to Gombe, it has levelled at least three culverts at the intersection of the Alkaleri road, linking Londo and Futuk to the south and Bara, Tashan Turmi, and others to the north.

Hassan Abba Londo, one of the aggrieved motorists who ply the road, alleged that Enerco, the construction company, only exacerbates the already deadly road. “They were not doing quality work on this road,” he believed. According to him, studying the flooding pattern and prevalence would save the company resources and effort. “The power of the flooding is far beyond the mini culverts Enerco is busy building on the road,” Abba told WikkiTimes. “They should give us good bridges.”

Abdulrahman Yakubu, a volunteer filling sand in the failed section of the road in Bara, corroborated Abba’s view. To him, the construction company has been busy doing nothing on the worsening road. And to have leeway, he said building a bridge instead of a culvert would no doubt stop the hazards of flooding.

It may not rain in Tashan Turmi Bara and their environs in Bauchi State, but fluvial floods from the Gombe Abba river in Gombe State wreak havoc, drowning residents, submerging farmlands and blocking waterways underneath culverts.

Yakubu Hassan, a resident of Tashan Turmi, told WikkiTimes the ravaging flood would come uninformed, “even when it doesn’t rain,” he said. “You could work on your farmland and be caught by an emergency flood.”

At least ten houses and farmland were submerged, including goats numbering 12. “The bizarre scenario is seeing dead bodies floating on water,” Hassan told WikkiTimes, adding the only way residents of Tashan Turmi mitigated casualties was through notification from neighbouring villages along Gombe Abba. “They call to inform us when the water is coming.”

Like others, Hassan said a well-built bridge is the only way forward.

WikkiTimes was only able to speak to only three of the ten companies awarded the road contract at different times. Others cloned their addresses online.

For instance, Shamsa Resources, which was paid 30.8…, claimed it completed its work on the road in 2015. However, data shows that it was paid in 2018.

“The contract was awarded in 2015, so we went to the site after the election, but we were not paid on time,” an agent of the company told WikkiTimes. “They supervised the work, and we even gave them six months of recession time.”

For Vibro, Samuel Bishop, the company’s draftsman said Vibro was only paid for consultancy.
“We are actually the consultant, not the construction company, ” he said. We only consult on the design of the road.”

However, Enerco which was highly paid among the companies ignored WikkiTimes’ enquiries.
Haitham Ibrahim, an engineer with Enerco declined to comment when contacted. An FOI sent to the company through him was also not responded to.

The federal ministry of Works and Housing in Bauchi State declined to comment on the trend. It claimed that only its headquarters in Abuja has the mandate to speak.

The ministry’s headquarters was later contacted over the phone, but the responder also dodged WikkiTimes’ questions. He advised that an FOI be sent. However, the FOI request has still not been responded to, weeks after it was sent.

A Humanist Perspective On Interfaith Dialogue In Nigeria, By Leo Igwe