The sergeant noted that to meet financial needs, soldiers now got “involved in illegal duties, sabotage, arms and ammunition deal, armed robbery and kidnapping” while calling on the Nigerian government to attend to their plight.

A soldier of the Nigerian Army, who identified himself as Sergeant Ismaila Ukwuhcodu, has lamented the poor salaries of junior army personnel in the country.

The sergeant noted that to meet financial needs, soldiers now got “involved in illegal duties, sabotage, arms and ammunition deal, armed robbery and kidnapping” while calling on the Nigerian government to attend to their plight.

The soldier in an open letter to President Muhammadu Buhari, obtained by SaharaReporters on Wednesday, said they pay for essential items, which the military ought to provide, out of the meagre pay.

According to him, they are also forced to spend their own money on buying uniforms, boots and other items of equipment. 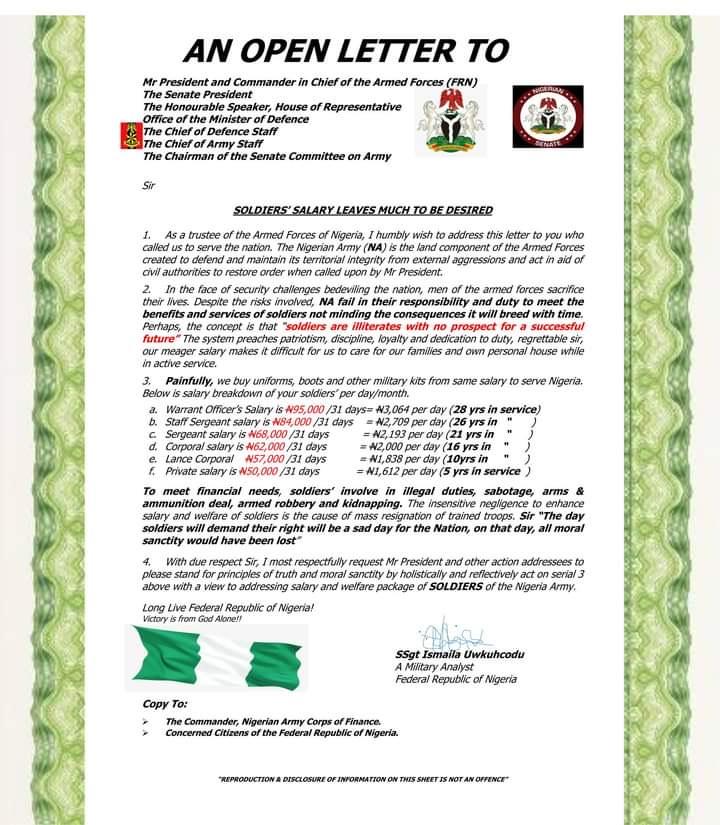 He urged the President to thoroughly investigate happenings in the military, particularly issues involving and affecting the rank and file.

“As a trustee of the Armed Forces of Nigeria, I humbly wish to address this letter to you who called us to serve the nation. The Nigeria Army (NA) is the land component of the Armed Forces created to defend and maintain its territorial integrity from external aggression and act in aid of civil authorities to restore order when called upon by Mr President,” the letter read.

“In the face of security challenges bedeviling the nation, men of the armed forces sacrifice their lives. Despite the risks involved, NA fall in their responsibility and duty to meet the benefits and services of soldiers not minding the consequences it will breed with time. Perhaps the concept is that “soldiers are illiterates with no prospect for a successful future”.

“The system preaches patriotism, discipline, loyalty and dedication to duty, regrettable sir, our meager salary makes it difficult for us to care for our families and own personal house while in active service.

“Painfully, we buy uniforms, boots and other military kits from same salary to serve Nigeria. Below is salary breakdown of your soldering per day/month.

“To meet financial needs, soldiers’ involve in illegal duties, sabotage, arms & ammunition deal, armed robbery and kidnapping. The insensitive negligence to enhance salaryand welfare of soldiers is the cause of mass resignation of trained troops.

“The day soldiers will demand their right will be a sad day for the Nation, on that day, all moral sanctity would have been lost. With due respect Sir, I need respectfully request Mr President and other action addresses to please stand for principle of truth and moral sanctity by holistically and reflectively act on serial 3 above with a view to addressing salary and welfare package of SOLDIERS of the Nigeria Army.”

I Can’t Step Down For You; APC Party Has Messed Up Nigerians – Atiku Abubakar Replies Tinubu