The ailing APC presidential candidate left Nigeria on September 24 to the UK for a medical trip and returned on Thursday evening after spending 12 days.

The Deputy Director of Strategic Communications of the Tinubu/Shettima Presidential Campaign Council, Lanre Issa-Onilu has described Nigerians as lost souls with devilish thoughts for asking about the health and whereabouts of the ruling All Progressives Congress (APC) presidential candidate, Bola Tinubu.

The ailing APC presidential candidate left Nigeria on September 24 to the UK for a medical trip and returned on Thursday evening after spending 12 days.

However, the leadership of the APC including the spokesperson for the Tinubu/Shettima Presidential Campaign Council, Festus Keyamo and the Lagos APC Women Leader, Jumoke Okoya-Thomas repeatedly failed to admit that Tinubu was in the UK on a medical trip.

The ruling party is also yet to release its manifesto 10 days after the official commencement of campaigns ahead of the 2023 general elections.

In an attempt to silence Nigerians from demanding answers about Tinubu’s fitness, Issa-Onilu accused the people of wishing him (Tinubu) death, saying their conscience will continue to torture them.

In a statement he released on Thursday evening shortly after the return of Tinubu, Issa-Onilu said, “A man went round over 20 states over two months campaigning to be elected as the presidential flagbearer of his party. For over three months after the primary, he has been putting in average of 17 hours a day going round, making consultations, attending meetings, hosting visitors, and setting up structures in preparation for a 5-month long campaign.

“No other candidate has been as active as he has been. He took about 10 days off and left for London. Neither videos nor photos could assuage your devilish thoughts. To you, a lost soul, he just must fall sick. It is your wish that he either falls sick or even dies.

“You claim to be either a Muslim or a Christian; but you've given your soul to the devil. Asiwaju Bola Ahmed Tinubu, a man of destiny, will soon unveil his transformative manifesto. The campaign council will be inaugurated and he will lead the campaign and he will be your next president. God willing.

“For those asking where he is, you may proceed to the Nnamdi Azikiwe International Airport, Abuja, to receive him now. May your conscience continue to torture you.” 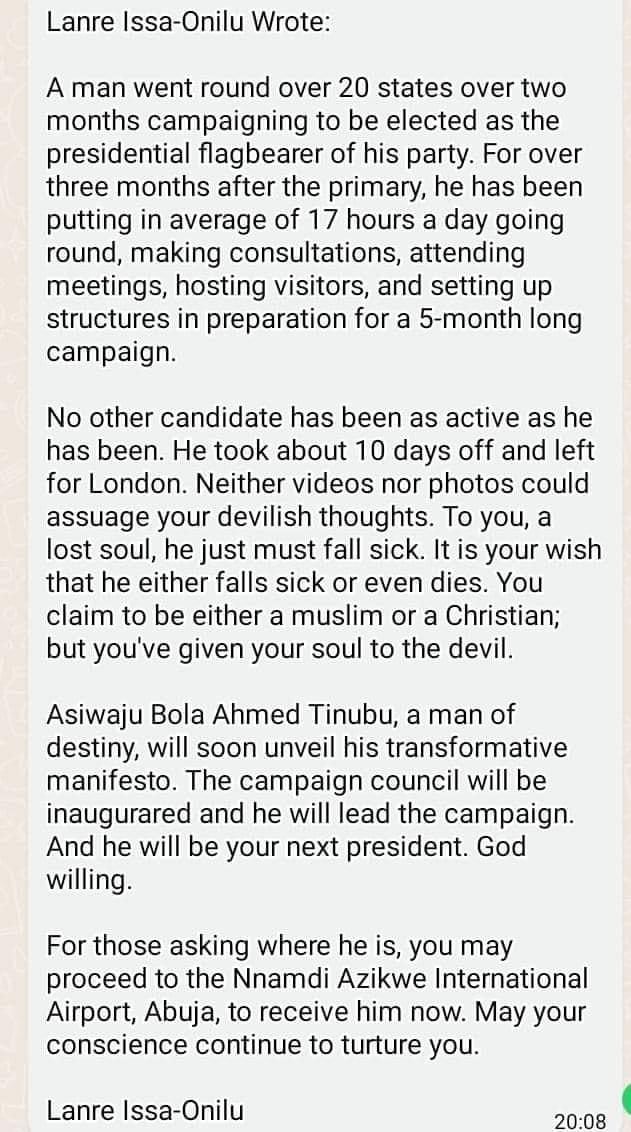 Edo 2020: You're Not A Democrat, Angry Nigerians Tell Tinubu Over Attack On Obaseki

Nigeria’s Power-Drunk First Lady, Aisha Buhari Listed As Witness To Testify Against Student For Tweeting That She Fed Fat On Poor People’s Money

Christian Association, CAN Calls For Probe Of Nigerian Pilgrimage Commission Over 'Improper Treatment' Of Pilgrims