Multiple sources confirmed to SaharaReporters that some of the basic requirements for employment were not followed in the recruitment.

The Nigeria Extractive Industries Transparency Initiative (NEITI) has recruited 70 new staff for the agency without advertising the vacancies, SaharaReporters has gathered.

Orji Ogbonnaya, the NEITI Executive Secretary carried out the underground recruitment which is characteristic of the shady recruitment processes in several federal agencies and commissions.

NEITI is under the supervision of the Secretary to the Government of the Federation (SGF).

Multiple sources confirmed to SaharaReporters that some of the basic requirements for employment were not followed in the recruitment.

Most of those employed were said to be children of friends and associates of Orji. 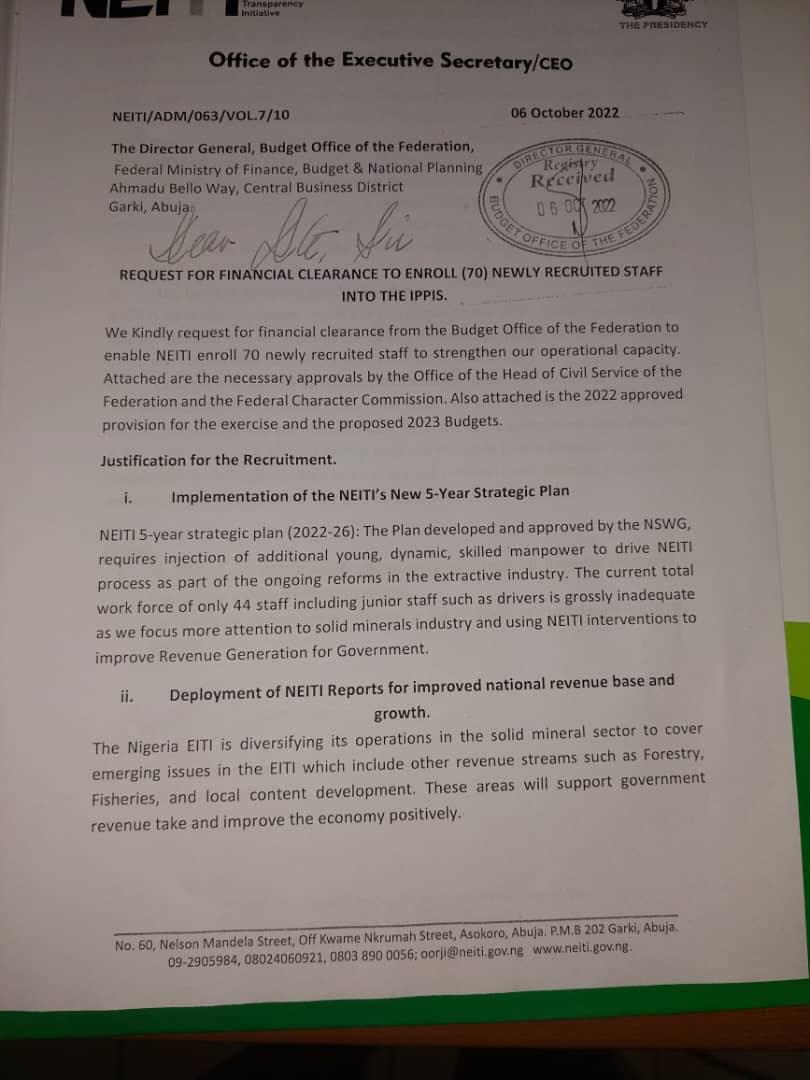 Others were family members of top government officials, including children of head of agencies.

“The Nigeria Extractive Industries Transparency Initiative recently embarked on the recruitment of over 70 staff without due process. There were no adverts, declaration of vacancies or observance of the Federal Government’s guidelines on recruitment,” a senior worker at the agency said.

“NEITI connived with some agencies of government to carry out the exercise. We pleaded with the Executive Secretary of NEITI Dr Orji to make the recruitment open and competitive, because this is what transparency and accountability which the NEITI represents is all about. Dr Orji was reminded that EITI is supposed to be above board in its dealings to preserve the sanctity of the only agency of government that Nigerians look up to.

“Our appeal to Dr Orji fell on deaf ears. He went ahead to recruit over 70 staff, handpicked and selected from the children of friends and associates, some of them are living in his house, others are friends of his children.

“Members of the NEITI board also had their children and relations offered appointment. We are asking that you use your influence to demand a rescue of the Nigeria state, youth of the country and NEITI which have been bastardised and abused, insulted and humiliated.

“It’s time for Nigerians to demand an investigation into the recruitment exercise conducted by the NEITI, we ask what criteria were used to select; how were they selected? Who were the people recruited? What is their background and qualification? How did NEITI arrive at them? How can an organisation with less than 40 staff go on to 120 staff? What work will three times more labour do in an organisation that is currently seen to have the largest number of workers globally?

“Everything in Nigeria is always different. How many people work at the EITI and it is the parent body? Check all the countries under the EITI, what is the numerical staff strength? How can these new recruits abide by the rules of transparency and accountability for which NEITI is known when they know how they came in?

“We want to put it on the notice that other recruitment done by NEITI even for one position was advertised. This can be confirmed from the NEITI website. This is an organisation that Nigerians love, boast and follow.”

“The EITI advertise its vacancies. Why will NEITI not advertise its own? Should NEITI which holds others accountable for not following the rule of law, restore to waivers of any kind in its operations? The new recruits are undergoing documentation and biometrics and will soon start drawing salary from IPPIS. No wonder the former accountant general diverted so much money. Cases like this make workers in IPPIS go fat, because they are motivated to do the unthinkable. We waited for NEITI to get to IPPIS so it will not deny.

“The Board approved the exercise because they will benefit from it. At the appropriate time we will expose all of them. All previous Boards of NEITI have performed above board, holding to the principle of decency, transparency, accountability and utmost sense of decorum and candor. We have it on good notice that the former Board and executive secretary even cancelled the approval it got to recruit in the interest of the nation citing lack of revenues, but the present board threw caution to the wind and displayed unbridled greed and corruption. “NEITI today is far from these principles. Rather it is teaching other agencies how to evade rules and procedures. Even the NNPC advertises its vacancies.”

5 Years Later, Guineans In NYC Protest Over 2009 Massacre Of Pro-Democracy Activists In Conakry