The security agents labelled the protestors as members of the Indigenous People of Biafra (IPOB).

A combined team of Nigerian security agents on Friday attacked and brutalised hundreds of women protesting against the killing of their children in a community in Enugu, Southeastern Nigeria.

The security agents labelled the protestors as members of the Indigenous People of Biafra (IPOB).

The women from Imufu and its environs who thronged Ogrute junction, in their hundreds, wore black attire and chanted songs to show their grievances and disapproval of the incessant bloodletting and massacre of their children.

Sources told SaharaReporters that the protesting women trekked to the local government headquarters at Ogrute and were joined by other women from neighbouring communities.

A video of the protest seen by SaharaReporters on Friday shows a crowd of women chanting songs in Igbo and demanding a stop to the killing of their children, labelled as IPOB followers or members.

They accused security agencies of killing their youths. 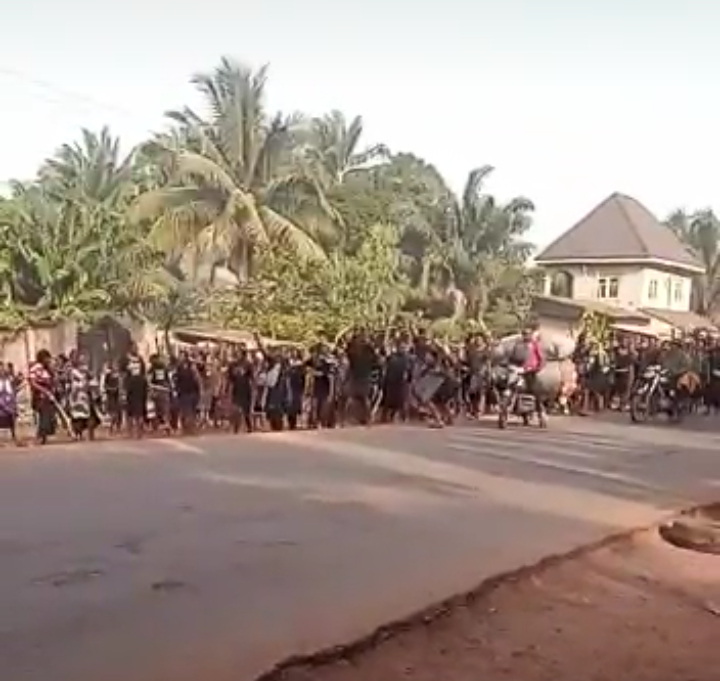 The women sang, "Iwe, Iwe, Iwe. Owe na ewe anyi makana udo adiro na obodo anyi, Iwe," meaning, "we are angry that we do not have peace in our villages, our state and country. We want our leaders to stop the killing of our children and other loved ones."

SaharaReporters learnt that the security situation in Igboeze North LGA got deteriorated recently with corpses of youths being picked from bush paths and other major roads almost on daily basis.

An eyewitness, who gave his name as Chinyere Ezeugwu told SaharaReporters that while the women were protesting peacefully, truckloads of soldiers, policemen and Ebubeagu vigilantes were deployed to the major roads leading to the local government headquarters.

Mrs Ezeugwu said, "Immediately they got to Imufu Junction in Ogrute, the security men started firing canisters of teargas to disperse the women who were protesting peacefully.

"Some of the security agents started shooting sporadically forcing the women to helter-skelter to save their life from the brutal force. While the women were running, the operatives pursued and arrested tens of others. I saw when they were forcing many of them into their vans and taken away."

When SaharaReporters reached out to the state police public relations officer DSP Daniel Ndukwe on the incident, he said he was “not aware of the incident”.

Freedom On The Ballot, By Kunle Wizeman Ajayi

NADECO Mourns As One Of Its Founders, Dan Suleiman Dies At 81

Australia Announces Decision To Remove British Monarchy From Its Banknotes

Rivers Government Blames Collapse Of N3.9 Billion University Of Port Harcourt Arena Under Construction On Failure Or Misapplication Of Equipment

2023 Presidential Election: Fulanis Versus The Rest Of Nigeria, By Bolaji O. Akinyemi