Speaking on the issue that prompted the lawsuit, Iweh said in a statement made available to SaharaReporters that Agriconnekt was founded in 2019, but struggled to raise capital, and didn't begin operations until early 2020, just before the Covid-19.

A Nigerian firm, Agriconnekt Services, managed by Brain Daniel Iweh has sued a German Development Agency, Deutsche Gesellschaft Fur Internationale Zusammenarbeit (GIZ) and two others at a High Court in Port Harcourt, Rivers State over an alleged breach of contract.

Speaking on the issue that prompted the lawsuit, Iweh said in a statement made available to SaharaReporters that Agriconnekt was founded in 2019, but struggled to raise capital, and didn't begin operations until early 2020, just before the Covid-19.

He said when it was preparing to launch on a small scale, they saw an advert, "Call for solution" by the German Federal Ministry of Economic Cooperation and Development (BMZ) and European Commission (EU), implemented by The Deutsche Ge Agriconnekt. The company applied and participated in a two-day hackathon, and was announced as one of the nine worldwide winners, and the only winner having Nigeria as a project region. He said the company was subsequently awarded a total of $758,000.

Iweh narrated, “On 11th of January, 2021, GIZ disbursed our funds to a US non-profit called "Mercy Corps" with an office in Nigeria to sub disburse to my company Agriconnekt, but till the time we are making this post, Mercy Corps did not disburse the funds to us giving lengthy reasons via email which we categorised as illogical and fraudulent, in summary; that we are a startup and cannot manage the grant, and meet up with project expectations, even when we used our initiative and solution to write the project, was selected as a winner, prepared work plan, scope of work, and budgeting used for disbursement of the funds to the so-called Mercy Corps which GIZ brought in.

“Mercy Corps in turn kicked us out, awarded and disbursed the grant to their long-time partner in Nigeria called "Coamana Ltd" who was never announced as one of the nine winners neither were they part of our team during the hackathon, and GIZ in a mail confirmed their approval of Mercy Corps kicking us out of the project with the highly illogical and baseless reasons, which we believe to be a criminal breach/intellectual theft,  injustice and highly fraudulent.

"We are so broken, and our dreams/visions shattered, but we had to put our pieces together to seek justice! After about a year plus of peaceful outreach to GIZ and Mercy Corps, of which they have refused to be fair and transparent, just last week as at when we were making this post, we filed a suit in a High Court in Port Harcourt, Nigeria and duly served the defendants, with GIZ as first defendant, Mercy Corps as the second defendant, and Coamana Ltd as the third defendant with suit number: PHC/3679/CS/2022.

“Additionally, we also petitioned them to the Economic, And Financial Crimes Commission (EFCC) to further seek justice, with petition number: EFCC/PET/HQR0238/2021.”

In a statement of claim filed by Agriconnekt before Rivers State High Court, the firm urged the court to declare that it is the winner of the GIZ/BMZ SmartDevelopment Hack-Call for Solutions as announced and congratulated by Smart Development Hack Team as one of the nine (9) winners on May 27, 2020, and is entitled to the sum of $352,000.00 out of €850,000 released by the 1st defendant to the 2nd defendant for onward payment to the claimant as the solution provider.

The court document continued: “(2) An Order compelling, the 1st and 2nd Defendants to pay to the claimant the sum of $352,000 as the solution provider from the phase one funds of €850,000 released by the defendant to be paid to the claimant which the 2nd defendant has refused to pay the claimant till date.

“(3) An Order compelling the 1st defendant to pay to the claimant the sum of $406,000 for phase two of the project having concluded all arrangements for phase two.

“(4) A Declaration that the removal of the claimant from the project after providing solution and non-payment of the funds by the 1st and 2n defendants without any cogent and verifiable reason(s) was a breach of contract between the claimant and the defendant as the claimant throughout the process never failed to perform its obligation.

“(5) An Order granting the claimant the sum of $300,000 as representing general damages against the defendant for breach of contract.

“(6) A Declaration that the substitution or replacement of the claimant by the 1 and 2nd defendants with 3rd defendant who never applied during the call for solution or participated in the hackathon process was unjust, unlawful and against good conscience. The sum of $150,000 against the 1, 2, and 3" defendants as cost of litigation.” 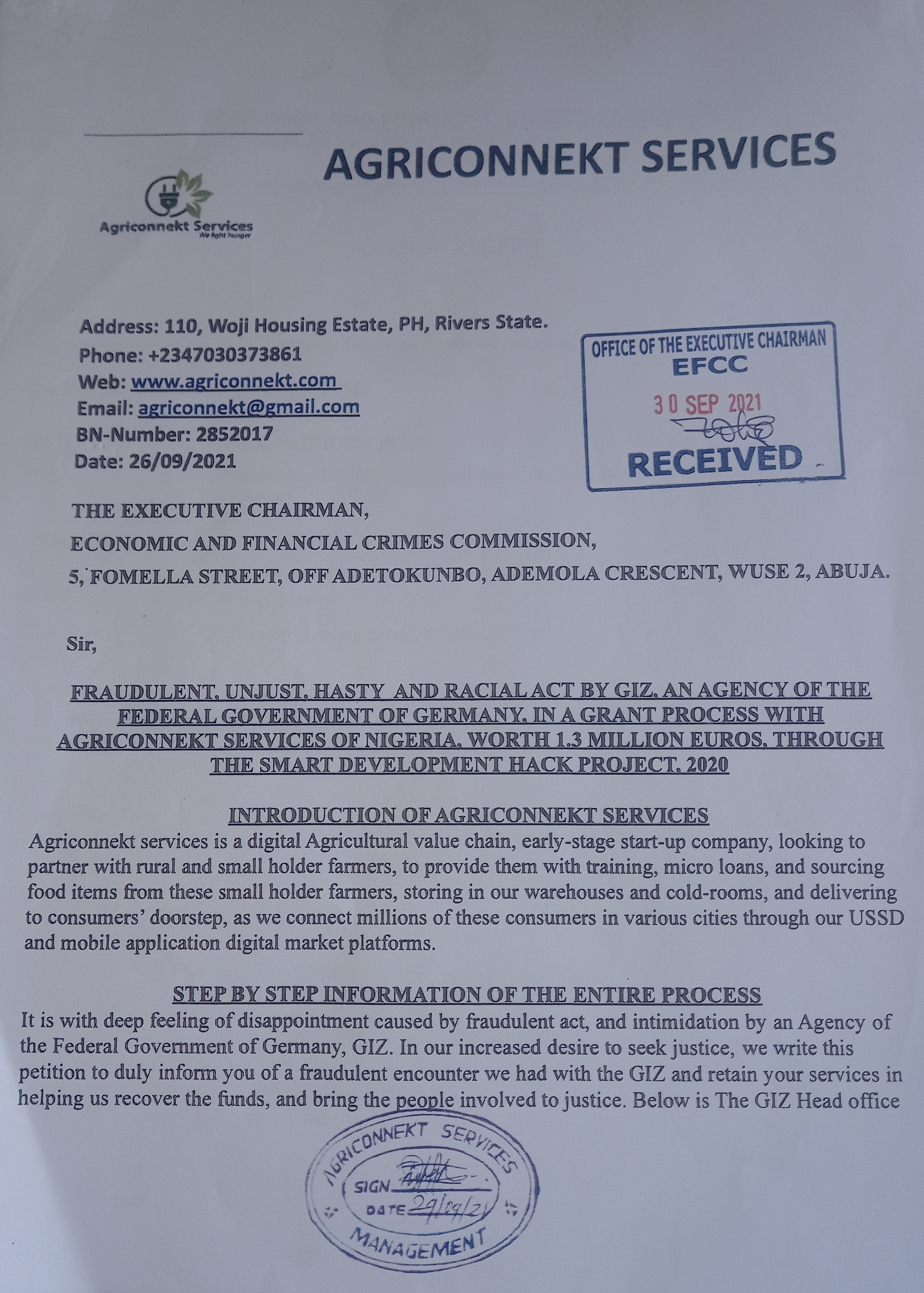 Discredited Ex-Minister, Fani-Kayode Under Fire For Praising, Posing For Photos With Terror-linked Pantami

Ngige: Nigerians Should Be Clapping Buhari Every Day And Thanking Us After God

Ekiti Elections: AGF Aondoakaa Steps In; Judge To Be Removed for Permitting Exhibits