A top source in the Presidency said the latest letter by Malami was “a move to cover his illegal deals.”

The Attorney-General of the Federation, Abubakar Malami has made moves to exonerate himself from the illegal payment of millions of dollars to some consultants without the consent of President Muhammadu Buhari.

The payment was part of the $418 million in Paris Club refund-related judgment debts.

President Buhari on August 03, 2022, during a Federal Executive Council meeting, directed the Minister of Finance, Zainab Ahmed, to suspend plans to begin the deduction of the $418 million allegedly owed to the contractors from the federation accounts.

However, documents seen by SaharaReporters showed that millions of dollars were released from the federation account on June 28, 2022, and July 7, 2022, to some of the consultants.

“Minister of Finance, Zainab Ahmed and the AGF (Attorney General of the Federation) Malami and others actually began paying these men since last year using heavily discounted promissory notes,” a source had said.

SaharaReporters had reported how Malami asked the Governor of the Central Bank of Nigeria, Godwin Emefiele to release $418 million to Linas International Ltd, a company belonging to Prince Ned Nwoko, a former House of Representatives member and other consultants over the Paris Club refund.

The Attorney General in a letter to Emefiele claimed ignorance of various court cases on the payment of the fund and asked the CBN to release the money. According to him, Nigeria shouldn’t be seen dishonouring financial instruments issued in her full faith.

“In view of the foregoing, you are kindly invited to note as follows: That I align with the position expressed by both DMO and CBN in their respective letters under the reference to the pertinent need for the FGN to honour the Promissory Notes in view of the need to sustain Nigeria’s rating and protect her capacity/image in the global financial circle,” Malami said in the letter addressed to the CBN and dated May 17.

“Nigeria, in good faith cannot be seen to be dishonouring financial instruments issued on her full faith.

“That in line with Para D(ii) of the CBN letter, there are no legal impediments against honouring the PN or permitting their rediscounting as May be requested by the beneficiaries. This is important in order to safeguard the general assets of FGN from attachment or any other adverse action that may be triggered by the beneficiaries of the PN.

“That in view of the foregoing, any of the beneficiaries who is favourably disposed to be settled through naira equivalent of the Promissory Notes should be obliged.”

However, in another letter dated October 14, 2022, and addressed to the finance minister, Malami claimed ignorance of the payment he earlier authorised.

“Your decision or steps taken by you with respect to my letter dated 11 May 2022. The status of all promissory notes issued with respect to Categories A-C and state whether any or part of the notes have been de materialized,” the Chief Law Officer said.

“If de materialized, kindly provide details of such transactions and sources from which they were funded. Whether any deductions have been made so far from the statutory allocations to the States and Local Governments.”

Speaking to SaharaReporters, a top source in the Presidency said the latest letter by Malami was “a move to cover his illegal deals.” 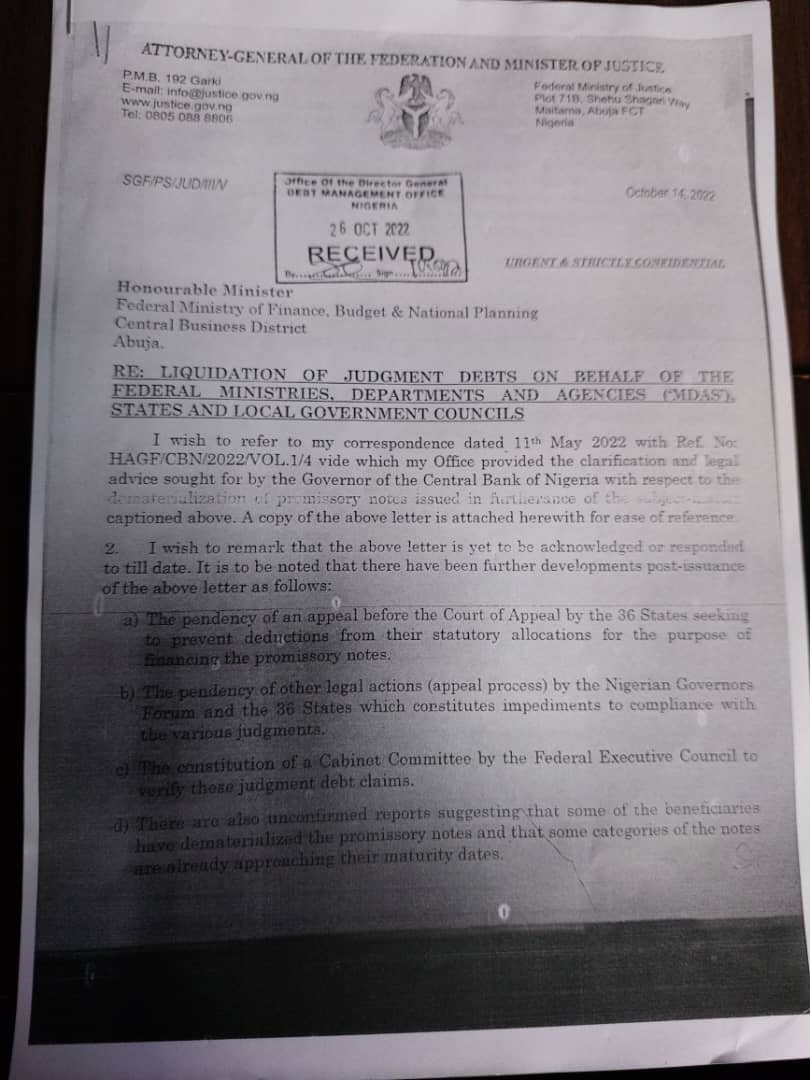 He said, “The Attorney General is trying to cover his own track, he backdated those documents. He made sure those guys were paid and he collected his own share.

“What he is doing now is to cover his own tracks; maybe a new government will come and he will present this letter that he didn’t authorise anybody to pay any money.

“The Attorney General is clever. He sent this letter to the Minister of Finance and he copied the CBN governor and also copied the Director General of DMO (Debt Management Office).

“This letter is just to cover his track after he authorised the finance minister, DMO, and CBN to pay the consultants which he benefited from.

“Some illegal monies are about to be paid but we raised an alarm and the AG stopped for a moment. He is working on paying the money quietly and Ned Nwoko is involved.

SaharaReporters had in a series of reports exposed wide-ranging legitimacy issues, including non-execution of agreed contracts and backdoor deals raised against the indebtedness from various quarters.

One of the beneficiaries is one Dr Ted Iseghahi Edwards, who was indicted by the Economic and Financial Crimes Commission (EFCC).

Documents seen by SaharaReporters showed that Edwards did not represent the Association of Local Governments of Nigeria (ALGON) as claimed.

A letter dated August 1, 2018, by former EFCC Chairman, Ibrahim Magu, to the Ministry of Justice/Attorney General Office, indicted him of an attempt to defraud the Nigerian government.

It said, “The suspects had filed applications in court to be joined as one of the judgement creditors during the garnishee proceedings and the applications were refused by the Federal High Court. The judge in a ruling delivered on the 27th of June 2016 frowned on Dr Ted Edward for brandishing a judgment purportedly delivered by the Federal Capital Territory on 30th October, 2015 and in fact took a swipe at it.

“By the Motion Ex parte filed on the 30th of March, 2015, the judgement creditors applied for a Garnishee Order Nisi which was granted on 1st April, 2015 and fixed the return date for 16th April for the Garnishee to show cause why the Order Nisi should not be made absolute.

“The Honorable Judge in his ruling stated unequivocally that let me state right away that the substantive matter was commenced by me until I entered judgement on the 3rd of December, 2013. I have searched my records up to the date of I entered judgement. I could not find the name of Dr Ted Iseghahi Edwards as representing the judgement creditors even for one day nor did I find any process filed by his law firm. How then was that judgement prosecuted?

“Another point to highlight is the fact that according to the purported letter of engagement being bandied by Dr Ted Edwards, he was engaged on September 15, 2011, long before the matter was filed in court quoting the exact judgment sum.

“What this throws up is the fact that the said letter of engagement was done after 3rd December, 2013 and backdated to make it look as if the suspect had been engaged before the case started. There is no evidence to prove that the suspect did any work in relation to the recovery process.

“A careful look at the memorandum of settlement Dr Ted Iseghohi Edwards and Hon Odunayo Ategbero betrays the conspiracy and an attempt to defraud the Federal Government by the suspects.

“Pending Actions; Invitation and/or Arrest of the suspect, Dr Ted Iseghahi Edwards with a view of confronting him with all the issues raised in the evaluation above. Tracing and filing interim forfeiture order on any property or asset acquired with proceeds of fraud by Dr. Ted Iseghahi Edwards.”

SaharaReporters gathered that despite the report, Malami persuaded Buhari to approve $159 million as legal fees to Edward. They also directed the DMO and the Ministry of Finance to release the promissory notes to Edward and others so that they could take their shares, a source had said.

“Edward was the Secretary-General of ALGON when the Paris Club refund case FHC/ABJ/CS/130/2013 was done by Joe Agi (SAN) and his colleagues before Justice Ademola. It is clear that he was not the lawyer to ALGON and this much ALGON has said in writing to Malami and the Chief of Staff, Gambari,” the source had told SaharaReporters.

“The EFCC in its report to Malami and (Ibrahim) Gambari also established that Ted Edward did not represent ALGON and that Ted Edward in his own handwriting admitted that Joe Agi was the lead counsel for ALGON. He went to one Judge, Baba Yusuf and procured a judgement that he was the lawyer to ALGON in the Paris Club refund case.”

Allegation Of Smear Campaign Against Buhari Is Sign Of Failure, Incompetence —PDP

Nigerian Workers Have Suffered All Kinds Of Injustice Under Buhari Government Over Failure Of Labour Movement –Pro-Labour Group, JAF