Arabambi also accused Abure of obtaining money under pretence and defrauding candidates and aspirants who obtained nomination forms to contest under the party.

The crisis rocking the Labour Party has deepened with the National Publicity Secretary of the party, Aboyemi Arabambi, accusing the Chairman, Julius Abure of forgery.

Arabambi also accused Abure of obtaining money under pretence and defrauding candidates and aspirants who obtained nomination forms to contest under the party.

In a petition by his lawyer to the LP leadership, the party spokesperson said the Chairman abused and used his office to corruptly enrich himself by obtaining money under false pretence from candidates.

The petition reads, “We write this petition against the National Chairman over the allegation of obtaining money under pretence and defrauding of candidates and aspirants who obtained nomination forms to contest under our great Party. The office of our client has been inundated with complaints and reports from candidates of the Party who claimed that they have been defrauded by the National Chairman. The complainants informed our client that they are ready to come forward and give evidence with documentary proof.

“One of the candidates, Hon. George Gabriel Chiadikaobi whose name was submitted to INEC as the Party candidate for Lagos West Senatorial District informed our client that on 22nd day of August 2022 paid the sum of N2.5m to Labour Party account number 1021575052 domiciled with UBA for nominations into Senate Lagos West through Sunday Ajayi

“Also Umeadi Emmanuel Azubike whose name was submitted to INEC as the party candidate for House of Representatives Amuwo Odolin Federal Constituency Lagos State informed our Client that on the 20th day of July, 2022 paid the sum of N3,000,000,00 and also another paid N1,000,000.00 only on the 16th day of August, 2022 to the Lagos State, Labour Party Account Number: 11224871298 domiciled with Zenith Bank. Also at various times, over N27,000,000 have been paid to Barr. Julius Abure through other members of the party including Comrade Joseph Ndirang and others that will form the witness team against him.

“Despite all the intrigues and delay that he claimed his nominations suffer, he met with the National Chairman Bar Julius Abure in Abuja who directed the National Publicity Secretary, our client to effect immediately the name of our candidates in the list of substitution submitted to INEC.

“Hon. George reported to our client that he was asked by National Chairman not to deposit the balance of N2.5m meant for the Party nomination forms into Party official Account (UBA Account) but rather to pay the money into the National Chairman's transport business account number 0821137431, Account Name: EVER READY TRANSPORT SERVICES LTD Domiciled with Access Bank which he did.

“It was after the above payment into the National Chairman's personal account contrary to the Party's Constitution that he instructed the National Legal Adviser to commence a fresh action at the Federal High Court Lagos where Hon. George was listed as the candidate for Lagos West Senatorial District.

“Hon. George later informed me that to his surprise, the National Chairman wrote a letter that the matter currently ongoing in the Federal High Court, Lagos be withdrawn and discontinued which will ultimately jeopardize the listing of his name as the Lagos West Senatorial candidate.

“Other candidates of our Party whose names were submitted for the Federal House of Representatives from various Federal Constituencies in Lagos also made similar allegations and reported to me that they have paid various sums meant for the Party into the personal accounts of the National Chairman based on his instructions.

“Our Client has also paid several Millions of Naira to the National Chairman which we have the evidence of transfer. There is no doubt that the National Chairman Bar Julius Abure has abused his office and used his office to corruptly enrich himself by obtaining money under false pretence from the candidates of our Party. These complainants are ready to provide evidence of those payments when the need arises.

“This development has brought shame to the Party and is the major reason for the ongoing internal crisis currently facing the Party in Lagos State. As the National Publicity Secretary and Image maker of the Party, our client owes it to the great Party as a duty to report this allegation as it is capable of imploding the party and distracting our focus from the 2023 general election unless it is investigated and resolved immediately. We want you to use your good office to investigate this fraudulent action against Bar Julius Abure for the interest of our great Party. Our client is available to provide further details on this.” 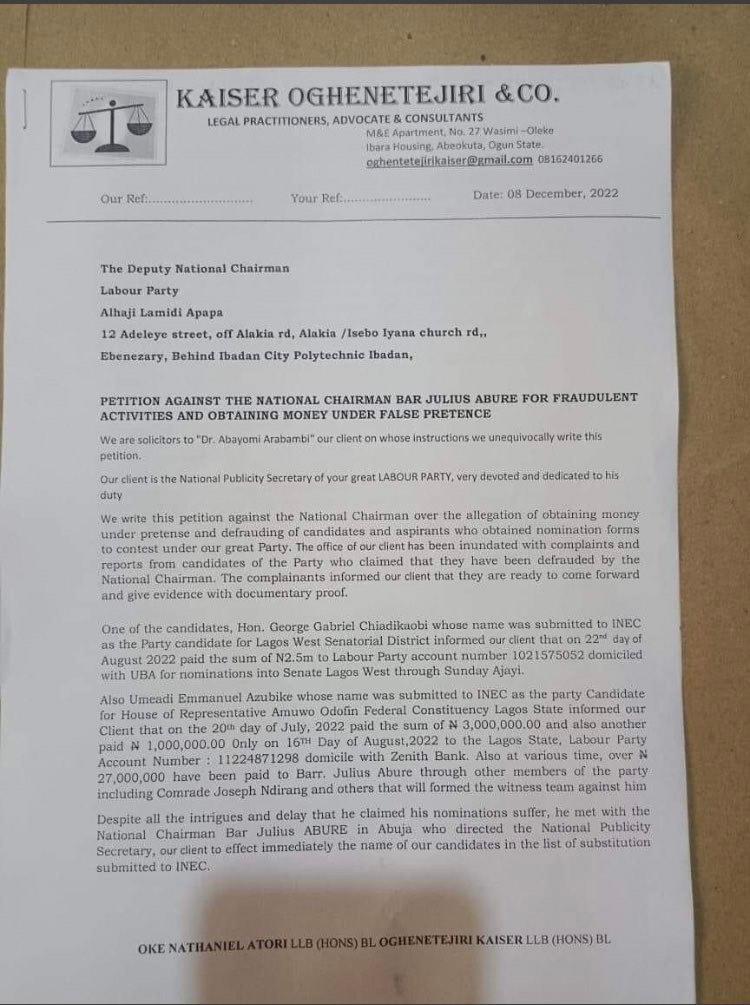 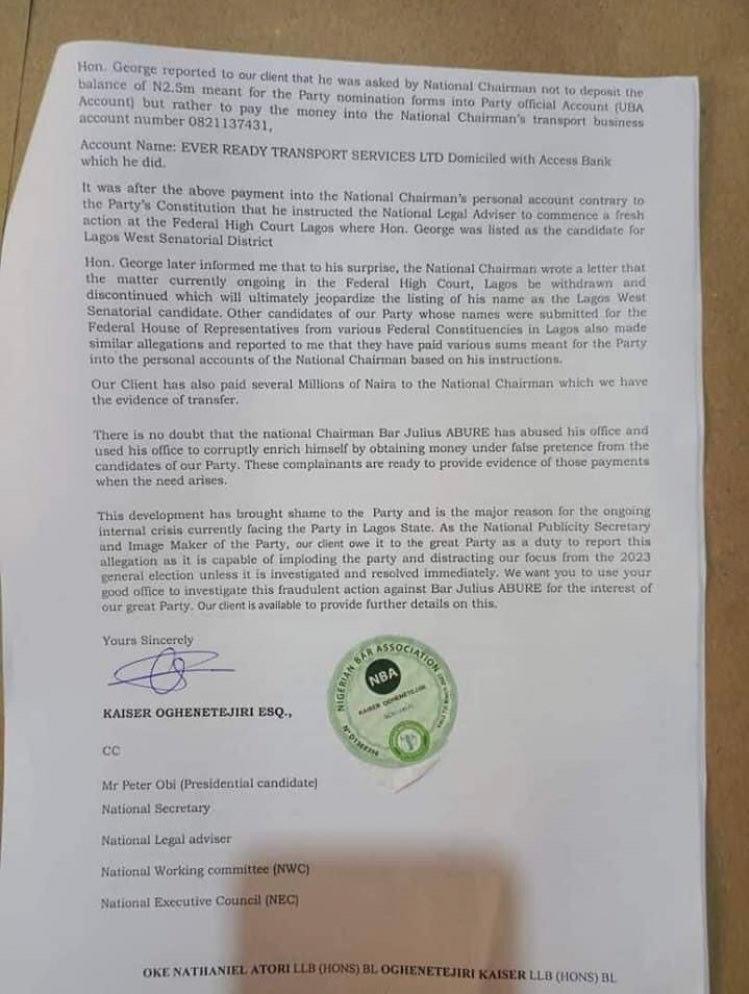 Nigerian Government Will Show In Coming Days It Can Deal With Terrorists, Bandits, Others —Lai Mohammed