SaharaReporters earlier reported that rather, on 5th of January, 2023, the governor through the Ministry of Chieftaincy Affairs queried the monarch for refusing to welcome President Muhammadu Buhari to the state.

Almost eight days after a tragic explosion shook the palace of the paramount traditional ruler and Ohinoyi of Ebiraland, Dr Ado Ibrahim, killing at least four Nigerians, Governor Yahaya Bello is yet to visit the scene of the incident.

SaharaReporters earlier reported that rather, on 5th of January, 2023, the governor through the Ministry of Chieftaincy Affairs queried the monarch for refusing to welcome President Muhammadu Buhari to the state.

President Buhari was on December 29, 2022 in the state to inaugurate some projects built by Governor Yahaya Bello.

However, the palace of the Ohinoyi of Ebiraland was rocked by a bomb place on that particular day.

About four people were killed by the blast, with some others injured.

In a letter to the prominent monarch signed by Enimola Eniola, Director of Chieftaincy Affairs, Ibrahim was accused of exhibiting deliberate attitude and actions capable of bringing “Kogi State and Ebira land in particular to grave disrepute”.

According to the letter, he refused to come out and receive the President at the designated venue rightly approved by Governor Bello.

A government house source told SaharaReporters on Friday that the governor is yet to visit the monarch.

The source added that there was an ongoing plan to dethrone Ibrahim.

“There is an ongoing plan to dethrone the king, seems oga (Yahaya Bello) is planning to become the next king so that he can stay relevant after his tenure. He is from Okene also,” the source said.

“Bello nor any member of the state executive council has not visited the king since the bomb blast. After the bomb blast, the king called and somebody from the government told him not to come.

“Their plan is to remove the king, put an interim king and Bello, not sure he is even from a royal family to become king after the end of his administration. That bomb blast was not only targeted at Buhari but the king was also a target.”

According to the letter, the traditional ruler was accused of failing to come out and receive the President at the designated venue rightly approved by Governor Bello.

The letter had read, “It has been observed with serious concern that you have exhibited deliberate attitude and actions capable of bringing Kogi State and Ebira land in particular to grave disrepute. These actions are quite unbecoming of a revered Royal Father of your status.

“Specifically, you were aware through many fora of the glorious visit of Mr. President and Commander-in-Chief of Nigerian Armed Forces, His Excellency, President Muhammadu Buhari GCFR to Okene on 29th December, 2022 to commission land mark projects executed by our dear Governor, His Excellency, Alh. Yahaya Bello. In a flagrant disregard to the persons and high offices of the President and the Governor, you bluntly refused to come out and receive the President at the designated venue rightly approved by the Executive Governor of the State.

“It might interest you to note that official courtesy demands that when a personality of a President occupying the highest office in the land is visiting or even passing through the State, the Governor and top Public Officers including topmost Traditional Rulers are expected to receive him as a mark of respect for him and the Office he occupies. It is on record that in time past, Topmost Traditional Rulers including the President, Kogi State Council of Chiefs do receive the Governor of the State on his return from critical missions undertaken on behalf of the State. But, you have chosen to disdain the office of the Executive Governor, and this time, you did it with effrontery before the number one citizen of Nigeria.

“This action of yours is an act of insubordination and disloyalty to the President and Commander-in-Chief of Nigerian Armed Forces, the Executive Governor of Kogi State and the entire Ebira nation as a whole. It portends grave danger to the Security of the State and laying bad precedence for Traditional Institution of the State.

“In view of the above, I have been directed to request you to forward a written explanation within 48 hours why disciplinary action should not be taken against you for these acts of insubordination and disloyalty. Oral explanations may be required from you when a panel is set up to study your case. It is expected that you will accord priority to the content of this letter, Your Royal Majesty.” 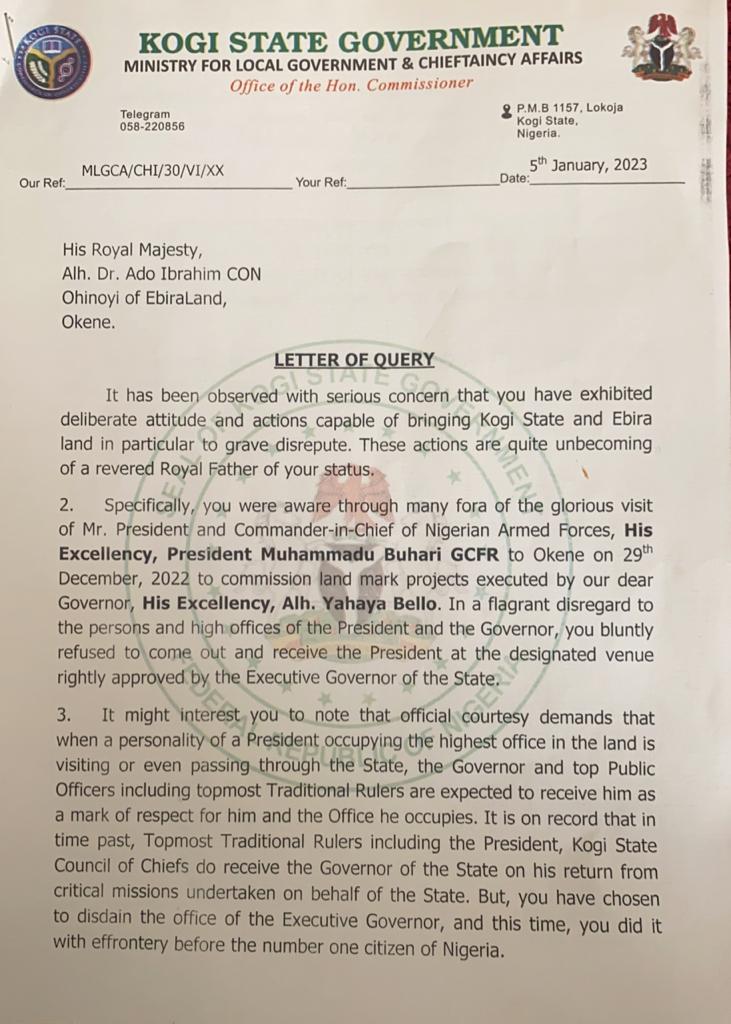 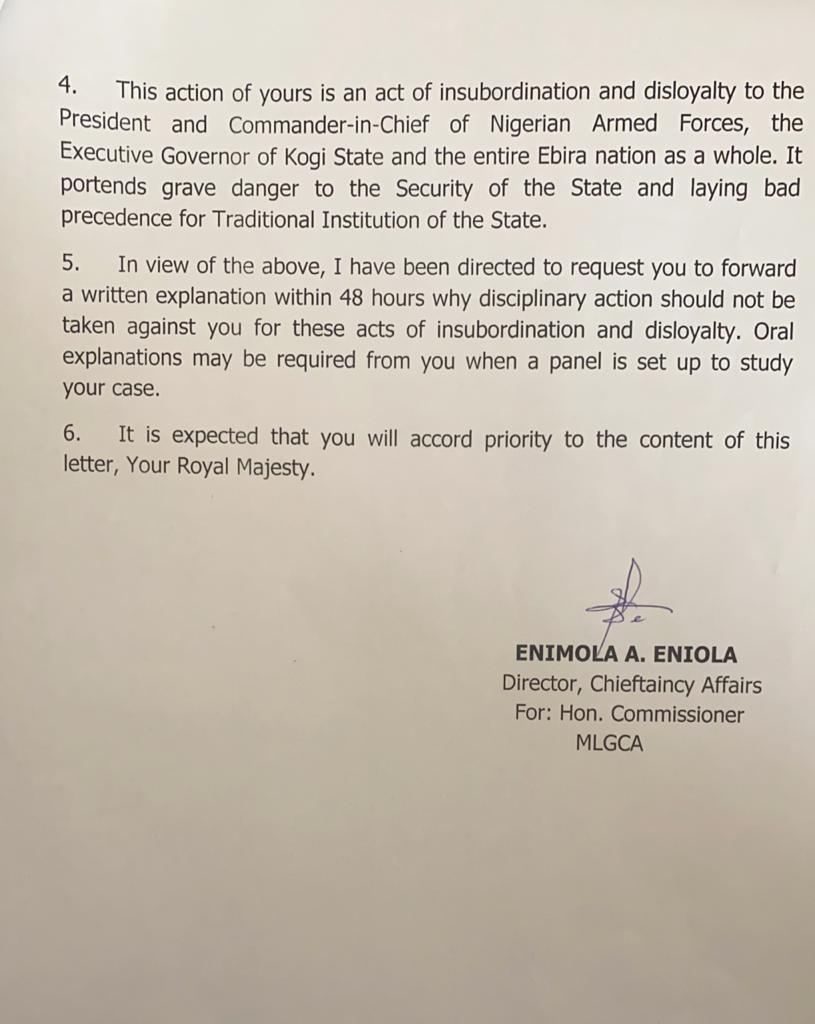 Ibrahim had earlier expressed his support for Natasha Akpoti-Uduaghan, Kogi Central Senatorial candidate of the Peoples Democratic Party amid threats from Governor Bello and the ruling APC.

The governor had warned monarchs in the state against receiving or supporting candidates from opposition political asides from his party.

He threatened that any monarch that received candidates asides from the APC would be deposed.

Calling on people to support Natasha’s ambition, the first class monarch had said, “My dear respectful citizens, I present to you my daughter, Natasha Akpoti-Uduaghan.

“She knows what she wants and when to get it. Go and take care of her as the only female in the contest. I am proud of her and want to have more of her in Ebiraland.

“What you are doing is for good, I won’t respect anybody who is not doing the right thing. My mission and fulfillment is to have more of Natasha in Ebiraland for the whole nation to know who we are. I know what you went through to build your image.”

$200,000 Cash Seized From Nigeria-Bound Man At US Airport

I’ve Heard Tinubu Say Southwest Nigeria Sleeps When He Sleeps, Wakes Up When He Wakes Up –Naja’atu Muhammad

Another Governorship Candidate Dies With Weeks To Nigeria's General Elections

Years After Tinubu Admitted Cash In Bullion Vans Spotted At His Lagos Residence On Election Eve Was His, APC Secretary Says ‘The Vans Missed Their Way There’