SaharaReporters on Monday reported that Kanunta’s indefinite suspension by Germany branch of IPOB was disclosed in a statement titled “Suspension of IPOB Membership of Mr. Kingsley Kanu a.k.a Kanunta” and signed by the group’s national coordinator, Mr. Collins Chineduh.

Confusion and contradiction have trailed the indefinite suspension of Mr. Kingsley Kanu, popularly known as Kanunta, a younger brother to Namdi Kanu, the detained leader of the Indigenous People of Biafra (IPOB), over alleged anti-IPOB activities.

SaharaReporters on Monday reported that Kanunta’s indefinite suspension by Germany branch of IPOB was disclosed in a statement titled “Suspension of IPOB Membership of Mr. Kingsley Kanu a.k.a Kanunta” and signed by the group’s national coordinator, Mr. Collins Chineduh.

The statement made available to SaharaReporters alleged that the IPOB leader’s younger brother had been using his affiliation with his elder brother to act against the code of conduct of the group.

He was also accused of placing himself above every IPOB rule and discipline in Germany and worldwide.

But in a counter-statement, one Ogbenna Abraham, who claimed to be IPOB’s legitimate national coordinator in Germany, said that Mr. Collins Chinedu was expelled from IPOB by the IPOB leader, Kanu on November 28, 2022.

The statement read, “This is to formally notify all members of IPOB family and the general public that Mr. Collins Chinedu was expelled from IPOB by Mazi Nnamdi Kanu.

“This was made public and official by Mazi Nnamdi Kanu on the 28th day of November 2022 through Barr. Aloy Ejimakor.

“Please, disregard any information coming from him as he is no longer the national coordinator of Germany and neither is he a member of the IPOB family at large so he no longer possesses the power or authority to suspend anyone or take any decision on behalf of the family.

“Need I remind us that Mazi Nnamdi Kanu is and remains the highest authority as far as the present IPOB is concerned. Every member of IPOB is expected to respect and work under his authority because he has sacrificed a lot for this cause.

“We wouldn't be here if he had not stood his grand. His intentions are pure and so are his decisions. So, let all of us keep this in mind before we decide to defy his instructions.”

SaharaReporters recalls that on November 28, 2022 after his routine visit to Nnamdi Kanu in the Department of State Service (DSS) in Abuja, Kanu’s lawyer, Aloy Ejimakor announced on his Twitter page that Kanu had directed that a memo should be made announcing Ogbonna Abraham as in interim national coordinator of IPOB in Germany.

“Today, I had a visitation with Onyendu & he asked me to make it public that he had asked one of his lawyers to do a memo to Mazi Chika Edoziem to announce Ogbonna Abraham as the new interim Coordinator for Germany; and that Edoziem & the lawyer who did the Memo can confirm this,” Ejimakor had announced. 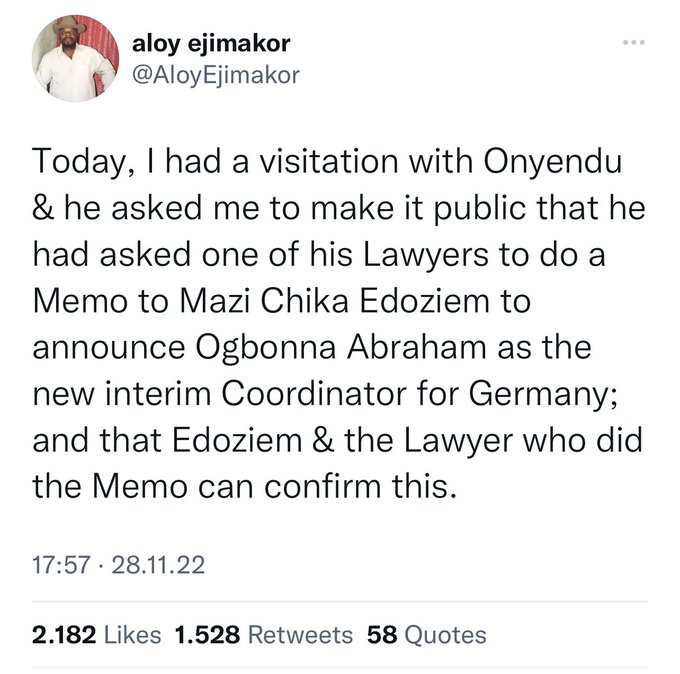 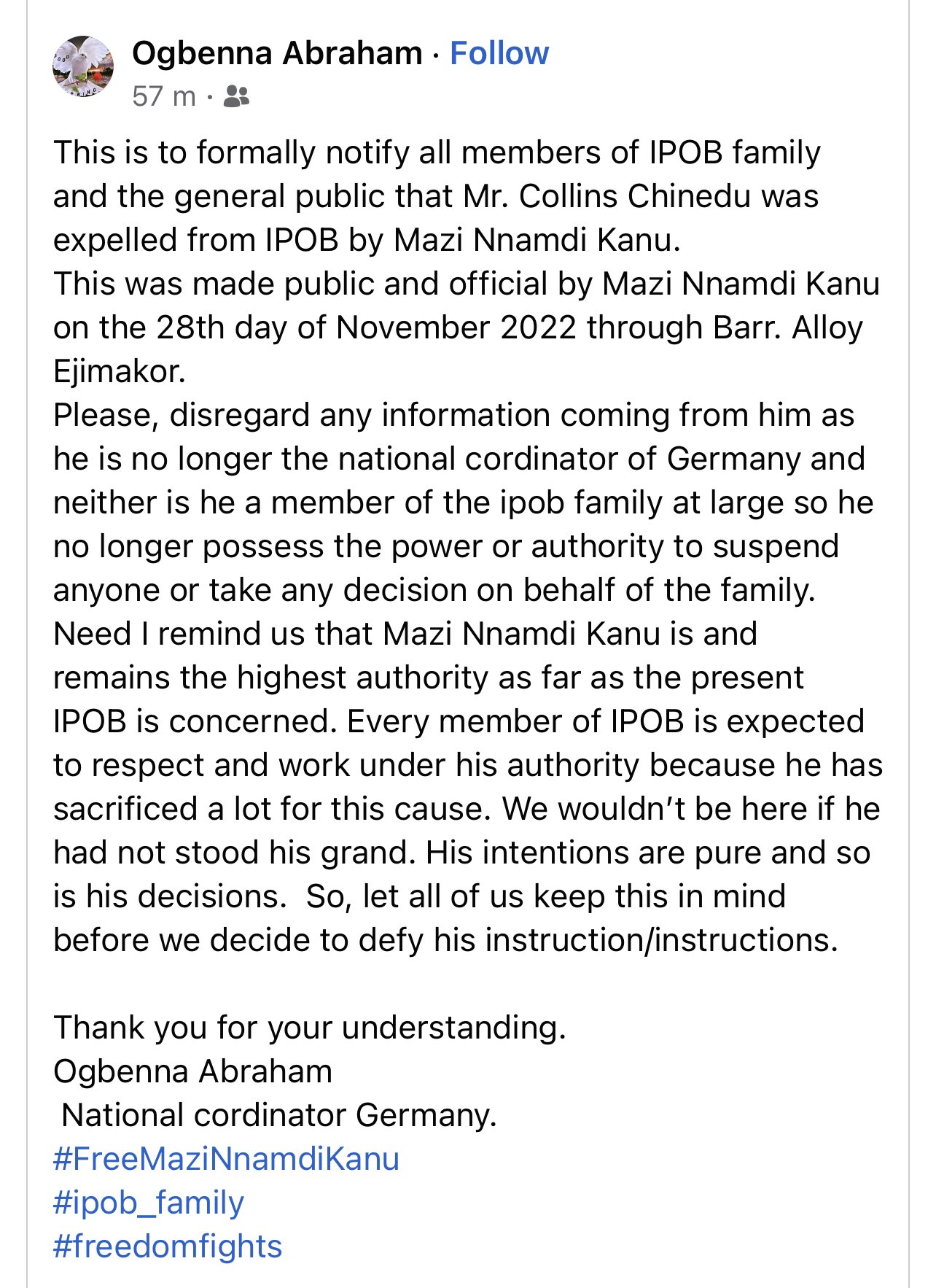 Request For Yoruba Oba Of France Is Ridiculous, Anti-Yoruba Culture -Alaafin Of Oyo

My Candidature And Popularity Is A Big Threat To APC, PDP In Ondo State, Says Olusola Oke

BREAKING: Amosun Campaigns For Both APC And APM At Buhari's Campaign Rally

Nigerian Community Where Residents Carry Corpses On Their Heads, Motorbikes To Mortuary Over Unmotorable Road

$200,000 Cash Seized From Nigeria-Bound Man At US Airport