According to the officers, the protest will hold at the headquarters of Zone 15 in Maiduguri, SaharaReporters gathered.

The Nigeria Police Force has admitted that some aggrieved senior officers in Borno and Yobe States are planning a mega protest over their unpaid six months arrears by the police authorities, according to a police signal obtained by SaharaReporters.

According to the officers, the protest will hold at the headquarters of Zone 15 in Maiduguri, SaharaReporters gathered.

The policemen, who said their six-month allowance increment had not been paid, asked President Muhammadu Buhari to rescue them from the Inspector-General of Police, Usman Alkali Baba.

President Buhari in 2021 approved a new salary structure for the Force.

The approved police salary structure whose implementation was supposed to have commenced in January 2022 only started in July 2022 with only one month arrears of payment, with six months outstanding.

They added that Assistant Commissioners of Police (ACP) up to the Inspector-General of Police, Usman Baba, had however been paid four months arrears.

“Nigerians should please help us out; the Nigerian government is not ready to pay our outstanding arrears. We are angry and ready to protest and embark on a strike action if that will solve our problem.

“We saw the nonsense written by the force spokesperson who claimed that there is no truth of a planned strike by personnel. Unfortunately, Muyiwa who is a Chief Superintendent of Police is affected as well but being part of the corrupt system, he turned himself into a liar. Even some commissioners don’t have access to the kind of funds allocated to Muyiwa’s office. So, we are not surprised about his constant attack on your platform,” one of the concerned officers told SaharaReporters.

Meanwhile, the police authorities have warned the officers planning to embark on protest to stop or be ready to face the consequences.

In the police signal exclusively obtained by SaharaReporters, personnel serving in Zone 15 were asked to be professional and shun any protest which could lead to mutiny.

The signal read, “CB:4001/BRS/DOPS/VOL.T/798 X ORDER AND DIRECTIVES X FOLLOWING MESSAGE RECEIVED FROM AIGZON 15 DOPS MAIDUGURI X IS HEREBY RELAYED X BEGINS X CB:4001/ZN15/DOPS/M/VOL.1/9 DTO:170934/01/2023 X ORDER AND DIRECTIVE X INTELLIGENCE REPORT GATHERED THAT X POLICE OFFICERS PARTICULARLY IN SUPOL CADRE X ARE PLANNING TO PROTEST OF UNPAID SIX MONTHS SALARY INCREMENT ARREARS X AIGZON 15 MAIDUGURI X HAVING CONSIDERED THE UBIQUITY OF SOCIAL MEDIA AS MOBILISER AND THE VULNERABILITY OF MOBILE POLICE OFFICERS FROM VARIOUS SQUADRONS X ON SPECIAL DUTY IN THE ZONE X THEREFORE X DIRECTS THAT COMPOLS MAIDUGURI AND DAMATURU SHOULD SUMMON ALL SQUADRON AND UNIT COMMANDERS X FOR LECTURE ON INGENPOL WELFARE POLICIES AND THE NEED FOR OFFICERS AND MEN IN THE SQUADRONS X TO BE PATIENT WITH THE ONGOING PROCESS OF THE PAYMENT OF SIX MONTHS SALARY INCREMENT X WHICH HAS SINCE COMMENCED IN BATCHES X HE FURTHER DIRECTS THAT COMMANDERS SHOULD BE STRONGLY WARNED TO LECTURE THEIR MEN ACCORDINGLY X TO NIP ANY MUTINOUS ACT IN THE BUD X ABOVE FOR IMMEDIATE COMPLIANCE X ACKNOWLEDGE RECEIPT PLEASE X ENDS X COMPOL DIRECTS YOU LECTURE MEN PLEASE.”

Recall that in November 2022, SaharaReporters reported that over 50 personnel of the Nigeria Police Force were detained for complaining about the non-payment of their six months' arrears of the new salary structure which the President Buhari government approved for the Force in 2021.

The aggrieved police officers have since been embarking on protests over the unpaid salary arrears. 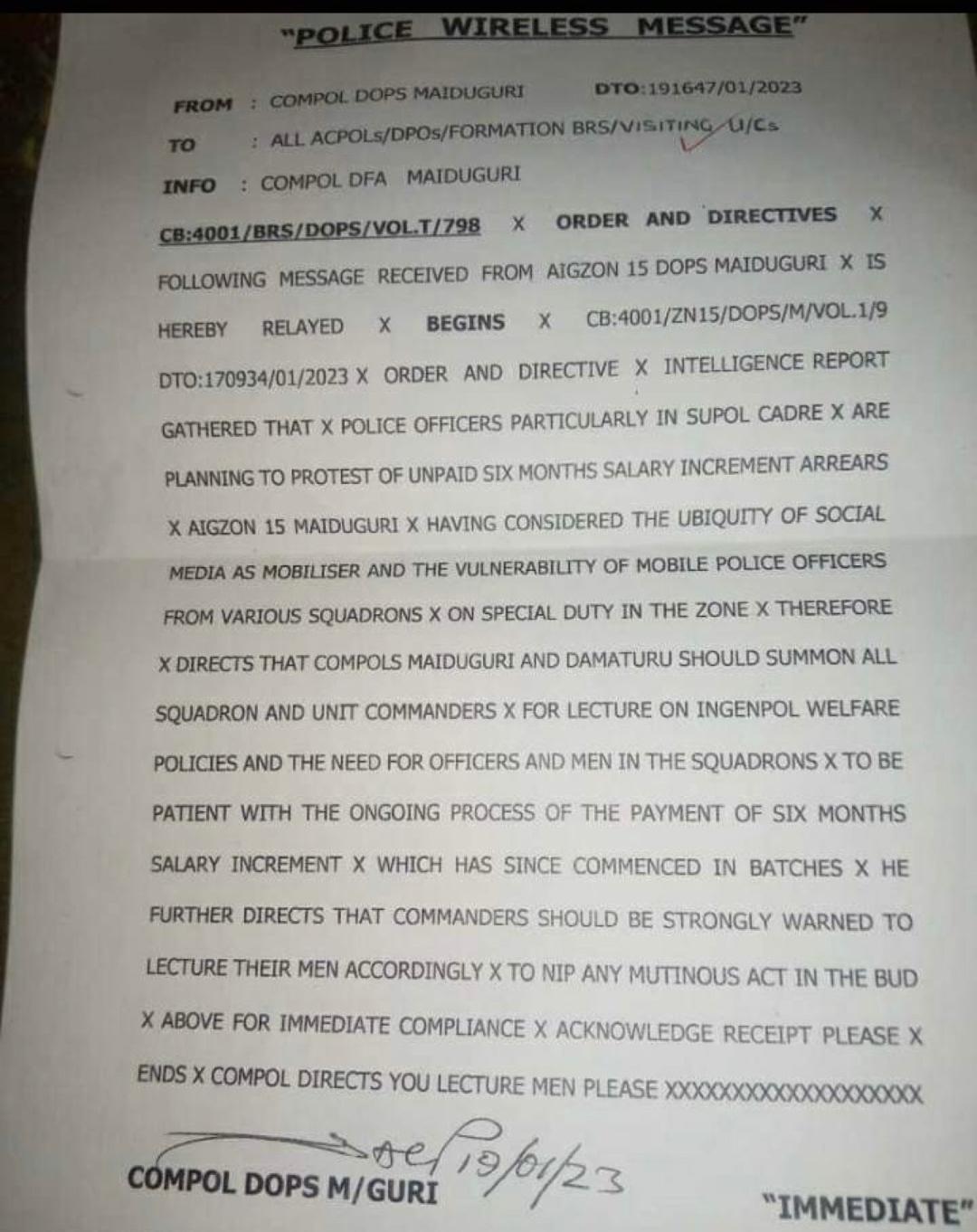 EXCLUSIVE: In Abuja, Police Charge Victims of ‘One Chance’ Robberies N20,000 To Launch Investigation Into Crime

Emefiele Is A Pawn In The Hands Of Some People, Fani-Kayode Lambasts Nigerian Central Bank Gov. Over Naira Redesign, Cashless Policy

Buhari Government Has No Idea Of How To Manage 21st Century Economy –Nigerian Students’ Association, NANS