On Thursday, May 12, 2022, Deborah Samuel was stoned, flogged and burnt to death in the school after posting a message her Muslim colleagues considered blasphemous on her class WhatsApp group.

Shehu Shagari College of Education, Sokoto is set to resume another academic session less than three months after the gruesome murder of Deborah Samuel, a 200-level student of the school.

On Thursday, May 12, 2022, Deborah Samuel was stoned, flogged and burnt to death in the school after posting a message her Muslim colleagues considered blasphemous on her class WhatsApp group. 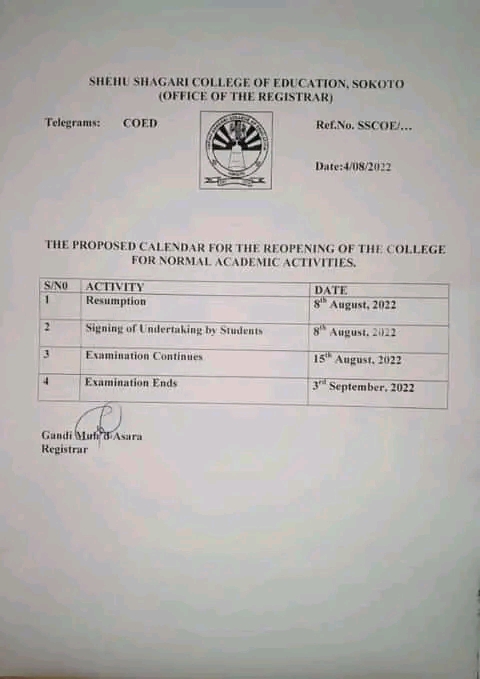 Meanwhile, in a circular released by the school management on Thursday, the students and staff were directed to resume on Monday, 8th of August, 2022.

The circular reads: "This is to inform all Students of Shehu Shagari College of Education, Sokoto that the College Governing Council has approved the Reopening of the College on Monday 8 August 2022.

"Students are requested to report to the College to sign an Undertaking at their various Schools after the payment of One Thousand Naira (N1000.00) only," the statement added.

SaharaReporters, however, gathered that the state government has not brought the killers to justice and is trying to bury the matter. Three months after the incident, no criminal charge has been initiated against the culprits.

The suspects paraded in court were those accused of causing unrest regarding the protest that happened within the metropolis after the killing in the school. They were not charged before the court for Deborah's murder.

"Those remanded in prison were arrested during the protest and we have declared the real perpetrators wanted and we have not been able to arrest them since then," the spokesperson for the state police command, Sanusi Abubakar confirmed to SaharaReporters in a telephone conversation on Friday that nobody had been arrested for the killing since Deborah's tragic death.

Sources also said some of the killers left Sokoto for Niger Republic after the incident, with the help of some people in government.

“Some of Deborah’s killers have fled to Niger Republic; some of them were not students. The truth is that the state government is not ready to do anything about Deborah’s death. The people who killed her were fighting for them (fanatics in government and political class).

“That was why there was never any mention of her killers. Right from time, the people security agencies went after were the people who rioted, which is why the charges are about causing public unrest. As far as Sokoto government is concerned, Deborah’s killing is dead and buried, the chapter has been closed,” a source close to the state government told SaharaReporters.

Another source said, “What we heard is that some of them are in Niger Republic. Despite that, the killing was recorded on video and there were so many people involved, the government and security agencies are not interested in prosecuting any of them. That is how it is; was she the first person to be killed for alleged blasphemy in the North? What has happened to any of the killers?

“Those arrested had nothing to do with what happened in the school, it was only about what happened outside. All of that was intentionally done to cover up for the killers. The rioters will receive a slap on the wrist and be released. After all the offence is not grave.”

SaharaReporters' investigation had earlier revealed that the Muslim mob that killed Deborah Samuel comprised students and some "foreigners” hired by the extremists to carry out the attack.

One of Deborah’s friends, identified only as Rakia, revealed the last words of Deborah Samuel before she was lynched by the mob of Muslim students for alleged blasphemy.

According to her, the deceased kept pleading, “What do you hope to achieve with this?”

She said Deborah was flogged, killed, and burnt, adding that it was the most horrible thing she (Rakia) had ever witnessed.

“Deborah was my course mate. I just stepped into the class when the uproar on her voice note started.

“It was her coursemates that started it. It all started with a debate on the upcoming examination on a general WhatsApp platform created for our coursemates. Two students from other departments who overheard some Muslim boys discussing the matter told Deborah’s close friends to prevail on her to retract the statement. But she replied via a voice note on the platform, “Holy Ghost fire. Nothing will happen to me.”

“We were made to understand that some young men were brought from outside (the campus) before the outrage. I was in class when some of our coursemates rushed in, saying “There is fire on the mountain o," she added.

PHOTOS: Gov Yahaya Bello Of Kogi Opens His New Mansion Even As Workers Salaries Are Not Paid |TheCable