The state House of Assembly also spent N28,715,000.00 on the 14th of June 2020 for the Website Design/Development Live Streaming and setting up of a resource centre.

The Oyo state government spent N17,553,600.00 in 2020 for the upgrading of the state website, SaharaReporters' investigation has revealed.

The state House of Assembly budged N28.7 million for 'website design, development of live streaming and setting up of a resource centre'.

The details of the project for the upgrade of the website - oyostate.gov.ng - were found on the Open Contracting Portal of the state. 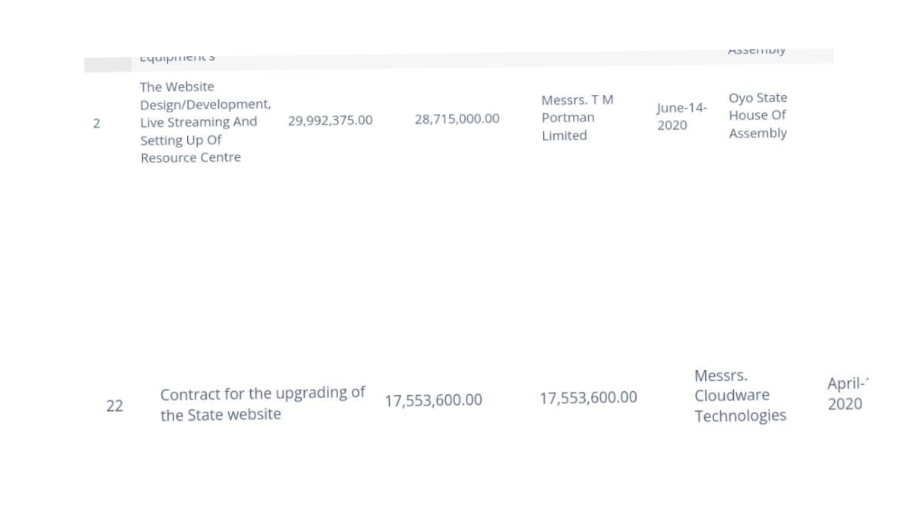 The project titled, 'Contract for the upgrading of the State website', was awarded to Messrs Cloudware Technologies on the 16th of April, 2020 by the Office of the State Executive Governor, Seyi Makinde.

However, according to tech experts who spoke to SaharaReporters, the N17.5 million contract sum for the upgrading of the state website was ridiculously outrageous, most likely due to corruption.

For instance, a web designer, Mr Adeyinka Ajao, described the cost of the upgrade of the website as outrageous, saying ordinarily, it should cost about N3 million, less than one-fifth of the money of the contract sum.

"It is just a way of siphoning public funds," he said, adding that one can build a new website with the same amount.

This means that the state government has inflated the contract sum to upgrade the website by 80%.

Similarly, SaharaReporters observed that the state House of Assembly also spent N28,715,000.00 on the 14th of June 2020 for the Website Design/Development Live Streaming and setting up of a resource centre.

The lawmakers awarded the project to Messrs TM Portman Limited.

Meanwhile, Mr Israel Ndukwe, a tech expert, described such a project as duplicity for lacking comprehensive information that would ensure accountability.

"That is not clear enough. There should be another document detailing all that has been listed there. If that is all to go by, then this is clearly a fraud scheme," he said.

When SaharaReporters contacted Mr Taiwo Adisa, the Chief Press Secretary to Governor Makinde, he said, "I guess you will need to speak with the Special Assistant on ICT whose office handled that matter."

However, efforts made by SaharaReporters to reach Akande were not successful as his mobile number did not connect despite repeated attempts.

Buhari Not Bothered About Criticisms By US, UK -Femi Adesina