The police said on Saturday that Ezenagu was arrested when he robbed six women of their belongings after putting a substance in their drink.

The Nigeria Police Force, Lagos State command, has said it arrested one Ifeanyi Ezenagu for allegedly robbing over 30 women, after posing to be a lover and luring them to a hotel.

The police said on Saturday that Ezenagu was arrested when he robbed six women of their belongings after putting a substance in their drink. 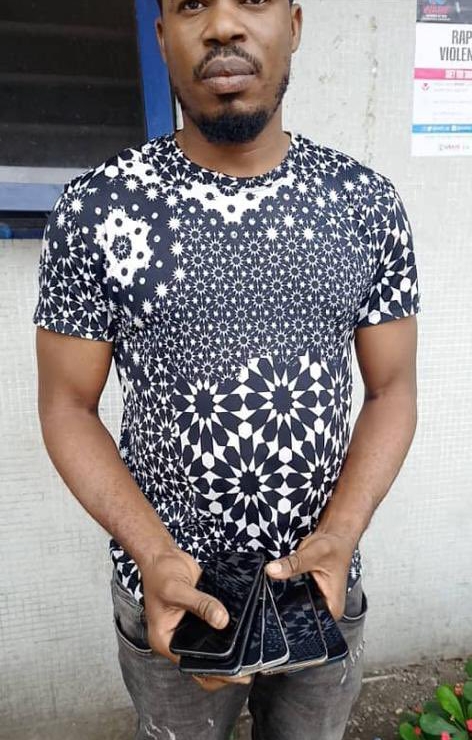 The command’s spokesman, SP Benjamin Hundeyin, who disclosed the arrest in a statement posted on the Lagos State Police Command’s official twitter handle, said the detectives of the Surulere division made the arrest possible.

Hundeyin said that the 34-year-old suspect allegedly robbed the women of three iPhones 12, two iPhones 11 Pro Max, one iPhone XR, one Nokia phone, one wristwatch and one gold necklace, with a total value of N2,368,000, after he lured them to a hotel, where he laced their drinks, resulting in their falling into a deep slumber.

In the statement titled: "Blind Date: Police Arrest Serial Thief," the PPRO said, "Preliminary investigations reveal that the suspect has no fixed address but lures women to different hotels where he drugs and robs them clean. Investigations further revealed that he has robbed over thirty women since he ventured into this crime.

"The Commissioner of Police, Lagos State Command, CP Abiodun Alabi, assures all residents of Lagos that the command will continue to work towards the decimation of crime and criminality in the Centre of Excellence. He equally enjoins Nigerians to be vigilant and report any suspicious happening to security agencies."

Man Narrates How “Anti-cultism” Police In Gbagada Unjustly Arrested Him, Forced Him To Pay N10,000

Nigerian Commission Disqualifies People Under 18 Years From Getting SIM Card

I Can Kidnap More Nigerians If I Kill Him Today; I Won't Take Anything Below N50m As Ransom – Terrorist Tells Relation Of Murdered Oyo Hotelier

May God Grant You Success In Kidnapping President Buhari, El-Rufai, Garba Shehu; Flog Them Well In The Bush –Islamic Preacher Prays For Terrorists

Fulanization – The Only Thing That Ties Nigerians To Fulani Is The 1999 Constitution, A Forgery, By Ndidi Uwechue